Hey everyone, I’m back with another Deck Advisor update!

I wasn’t able to really start working on a port/version for Mac yet, but this update does contain some exciting functionality. More about these further down the article.

Here are the features that have (or haven’t!) changed since the previous version:

Mac/Linux Support
I started looking into how to create a port of the program that runs in Mac and Linux and ran into a bunch of roadblocks, so didn’t make progress on that this week.

In order to support a full-featured OSX/Mac version of the application, I need access to a testing environment that I would need to spend money on. I have made a full-featured OSX/Mac port a Patreon goal, and added a more near-term goal of a command-line-only version of the application that is platform-independent. My plan is to start working on that next week.

Card Name Filter
The big new feature for this release is a text filter that filters decks by card name: 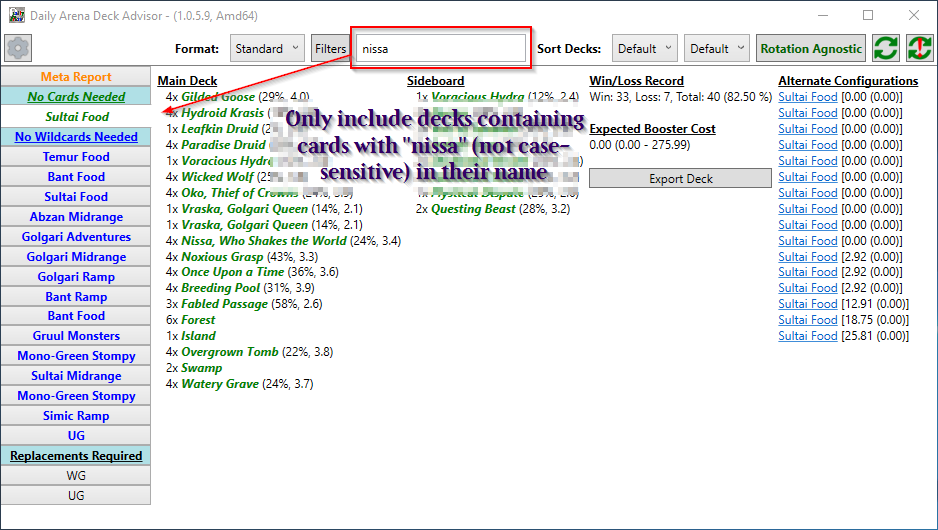 This is a case-insensitive, culture-invariant search. If I put “nissa” in the field, then I will only see decks containing cards with “nissa” (not case-sensitive) in the name.

The filter also allows for regular expressions. If the first and last characters in the filter are “/”, it will treat the string between them as a regular expression, and filter decks containing cards with names that match it. For example, if I put “/omnath|grum/” in the field, then I will only see decks containing cards with “omnath” or “grum” (not case-sensitive) in the name. 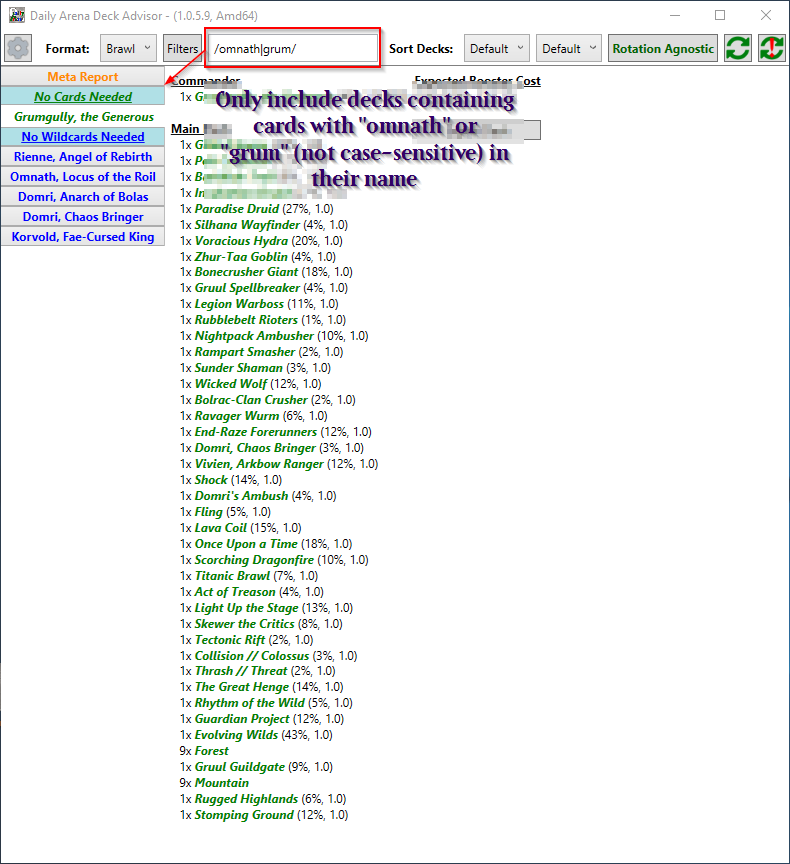 Minor and Under-the-Hood Changes
This release features a bunch of small bug fixes and under-the-hood changes, as listed below:

Spanish – Call for Help
I am going to start adding support for Spanish to Daily Arena Deck Advisor soon, but my Spanish is rusty. I’m looking for a volunteer who can help clean up localization/translation files for me! If you enjoy the tool and have good Spanish, this would be a great way to help!

Future Enhancements/Bug Reports
All planned enhancements can be found on the Github Issues Page (and any bug reports should be submitted there, as well). If you’re so inclined, go take a look, and maybe even add your own feature request on Github!

Free Account Progress Update
I’ve been using the same old Cavalcade deck for Bo3 this week on my free account, but have messed around with a more budget Mono-Red Aggro deck for Bo1. I did end up playing a [c]Jace, Wielder of Mysteries[/c] self-mill deck for Wednesday Brawl (which didn’t win much, but was hilarious when it did), and I even blew some wildcards to craft a Historic deck (Mono-White Lifegain Angels) that I played with a bit. Sharing the deck lists below:

Thank you to all the users who have tried out this application, and passed it on to your friends. I look forward to making further improvements, and putting together other useful tools like this in the future!

As always, feel free to send any questions, comments and criticisms to me here, on Reddit, on Twitter at @DailyArena or on Facebook via the @DailyArenaMTG page.

Joseph Eddy is a Father, Husband, Son, Brother, Software Developer, and Gamer. Magic is his favorite hobby, and he’s looking forward to seeing you all on Arena. He streams Magic Arena on occasion, but currently is unable to keep to a set schedule.