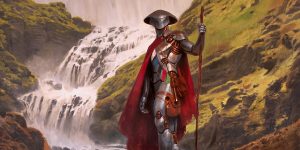 Bant Golos is a deck archetype that relies on Field of the Dead and other ramp cards such as Growth Spiral and Circuitous Route to create zombies by merely playing lands. The deck’s namesake Golos, Tireless Pilgrim allows you to reliably search for Field of the Dead from your deck, and having a powerful activated ability to go along with it. Generally, the game ends when you overrun your opponent with zombie tokens, or big creatures that benefit from excess lands such as Hydroid Krasis and Beanstalk Giant.