Welcome back to Brewing in a Top Hat! Today, I am playing a Superfriends-Control deck that uses an infinite token loop to close out games. With the absence of Felidar Guardian in Kaladesh Remastered, we didn’t have access to the infinite combo that got banned in Pioneer, so I set out to find a way to go infinite with Saheeli which led me to an image on the /r/MtGHistoric Discord (sorry, I don’t remember who shared it) of an Izzet deck going infinite with Sarkhan and Spark Double, and I decided to try to build the best possible shell for it. 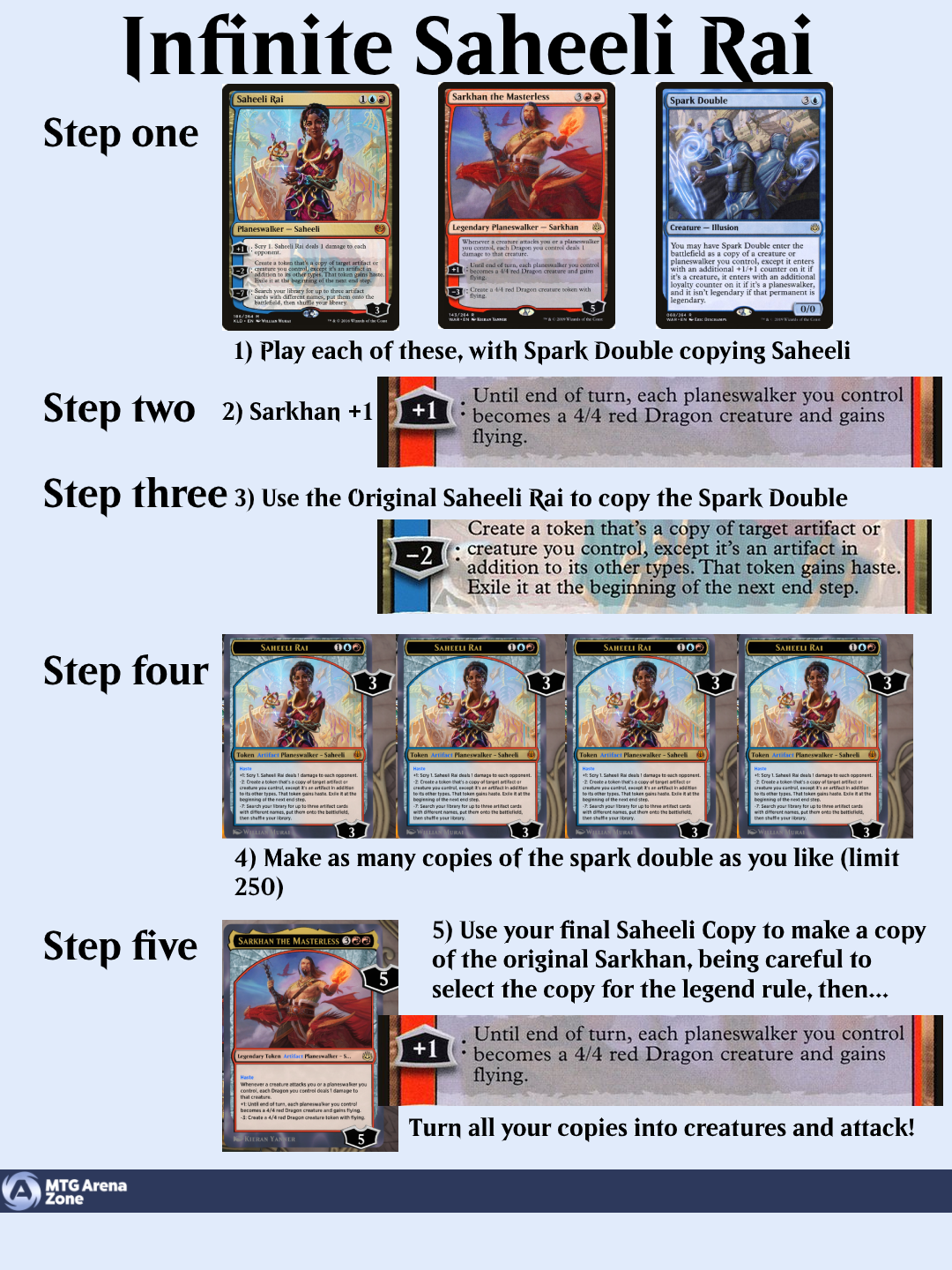 After several iterations and some testing, this is what I came up with:

Thoughtseize: At this point, if you’re playing black, you’re probably playing four Thoughtseizes somewhere. Certainly one of the most influential cards in the format.

Bloodchief’s Thirst: This card has really grown on me as a removal spell. I could see choosing Fatal Push over it for the instant speed (and if you do that, put in some fabled passages), but I prefer the ability to destroy larger threats like Elder Gargaroth and Ugin the Spirit Dragon.

Mazemind Tome: There are a lot of fun tricks you can do with this card and the two Saheelis. If you get to 3 page counters and you want to keep drawing without exiling, turn a servo or a Wishclaw Talisman into a copy.

Mind Stone: Copy it with Saheeli Rai then sac it to draw or use it to ramp. Use Saheeli, Sublime Artificer to turn Mazemind Tomes and Wishclaw Talismans into it, or turn one into a Mazemind Tome and start putting page counters on it.  Very versatile!

Wishclaw Talisman: Copy this with Saheeli Rai to donate your opponent a token that exiles itself at the end of turn.  Don’t let your opponent actually get a hold of one of these for keeps, unless you are going to win with what you search for.  They are your monkey paws.

Saheeli Rai: We need her alive to combo off with, so don’t overuse her copying ability. Keep her loyalty high with her plus ability, or keep her in hand.

Saheeli, Sublime Artificer: This isn’t part of the combo, but she defends the combo and helps set us up for it. Also she can provide another planeswalker-dragon for our alternate, but much more likely, win condition, Sarkhan the Masterless.  She can turn our artifacts into dragons in a pinch.

Spark Double: Yes he is part of the combo, but don’t sleep on a second Sarkhan the Masterless if you don’t have the Saheeli Rai. Each dragon shoots attacking creatures twice if you have two in play – for this reason, it is always better to copy Sarkhan than his dragon token.

Yahenni’s Expertise: You ideally want to cast a follow up Saheeli of some kind with this, or sometimes a Cry of the Carnarium out of the sideboard, but in a pinch any of your artifacts will do.

Sarkhan the Masterless: Apart from being in the combo loop, Sarkhan is a strong finisher for us. He applies pressure, and if they can’t immediately kill the dragon, he can oftentimes win you the game by himself with no Saheelis needed.

My sideboards are built and maintained for the meta I am seeing the most of when I play.  I’ll share what I’m currently running, but remember that if you find yourself facing a lot of one deck, then you should adjust. The meta I face might not be the same as what you face at your rank, or a new deck could have shown up.

Before the specifics, I want to generally say that for climbing, you won’t be able to have an effective sideboard that shuts down anything you happen to face. That’s not the goal; instead it’s to tailor our answers to the type of threats our opponents use to win.  If they win by taking away all our stuff, we want more ways to get stuff and threats that leave something behind when they remove them.  If they win by going wide and swarming us with lots of small creatures, then we want more board wipes. If they win with some graveyard shenanigans, then we want to have graveyard hate.

I’ve given you the sideboard and guide that I think will work best for climbing against the meta in general.  However, my personal strategy for making adjustments to my side is to check what the biggest historic streamers (like Crokeyz) are using, and throw in some specific cards to beat that deck.  The players at the rank that I play at seem to be heavily influenced by streamers.  If that is the case for you too and you want to try it, I dedicate 4-5 slots in my side to this strategy.

It is unlikely that you will get to combo off against them as they are too fast.  Instead, the goal is to get a Sarkhan or two up and running to stop their attackers, while keeping them from playing Muxus and Krenko with Aether Gusts and Disdainful Strokes.

We swap out our anti-aggro for better midrange interaction.  Narset does a lot of work in this match up.  Try to get her out and protect her, and usually your opponent will over commit to dealing with her, leaving you free to combo when they least expect it.

We bring in some graveyard hate and take out some redundant removal.  This is a much rarer matchup than it used to be, but Jund Sac is still very strong, so don’t write it off.  We struggle game 1, but post-board we have an easier time. Prioritize fetching your grafdigger’s cage with Wishclaw.

We swap out Saheeli, Sublime Artificers for Narsets and take our board wipes out for some counterspells and Chandra.  The trick to winning this matchup is being the first one to stick a threat, which is why Chandra gets brought in.  She is guaranteed to land if you cast her, and even if you only get one +2 off, you are still putting them on a clock that can tip the scales in your favor.

The combo keeps being disrupted before I can go off

It’s not always right to play your Saheeli Rai right away. Against many decks, it will be better to get a Sarkhan out, then try to play both Saheeli and Spark Double on the same turn once you get to seven mana.

Why are there so many 1-of’s and 2-of’s in the sideboard?  I’ve seen people say that’s bad before.

Normally yes, having multiple low copies of cards is bad for your consistency, but we are using Wishclaw Talismans!  We can search our deck for the exact silver bullet we need to deal with whatever comes our way, without affecting our consistency because we aren’t relying on drawing it.

Is Yahenni's Expertise really the best boardwipe?  What about Languish or Storm’s Wrath?  Why not the 3 or 5 mana sweepers?

Two main reasons. One, the tempo play of clearing an opponent’s board on turn 3 or 4 and being able to follow it up with one of our Saheelis (or Narset out of the side) is back-breaking.  And two, Nissa, Who Shakes the World is seemingly in every single Sultai Midrange deck, and she makes 3/3s.

Why add black?  Why not stay Izzet or go with white or green for your third color?

My first attempt at the deck was purely Izzet using Baral and counter spells mixed with some red removal, but it was just too slow and inconsistent.  Izzet control just can’t handle both the speed of enemy Goblin decks and the mid-game of Sultai.  I was getting blown out over and over. So I tried adding green to ramp the combo out faster, and opposing Sultai decks loved that.  One interactive spell and I was top decking and praying for the right card to finish the combo.  I needed something to get the perfect piece when I needed it.  I thought about trying black for Grim Tutor, and that’s when I found the idea of adding Wishclaw Talisman, and it was just what I needed.  So I grabbed my Thoughtseizes and dove head first into Grixis.  My winrate jumped overnight, and, after some refining, I settled on this list.

Other Cards and Budget Options

Here are some other cards that I tried and evaluated for you.  Some were playable and some, not so much.  Adjust for your collection to craft the version that works best for you, without blowing all your wild cards.

Aether Spellbomb: Great card, but just a bit too soft. We are in black so we want our removal to be hard.

Witching Well: This is a budget option if you can’t afford the Mazemind Tomes.

Implement of Malice: Maybe an even better budget option than Witching Well. In testing, I loved turning a servo token into one of these then sacrificing it for value.

Implement of Examination: Malice is better because it’s 1 cheaper.

Midnight Clock: I used one of these for a while, and when it does go off it is pretty much a guaranteed win, but most of the time it was just a slower Mind Stone.

Treasure Map: I think this is just a worse version of Mazemind Tome, but if you have these crafted and not the tomes, it’s a fine replacement.

Terror of the Peaks: Adding another dragon to the deck helps Sarkhan protect himself, and this is an incredible target to copy. If you have an active Saheeli Rai + Spark Double, copying it twice should be enough to kill your opponent.  5 damage from the first copy, 10 from the second, then 10 from attacking with both for 25 damage total. Reminds me of one of my old brews in fact…

Thanks for reading! Check out the other decks in the Brewing in a Top Hat series.