Hello my fellow planeswalkers! I am The MTG Hero. If you don’t follow me on Twitch, you might not know that I have a list of decks that, shall we say are “ideas” at best. But every now and then a few of these decks finally take form and become real powerhouses. In fact, some of my most popular YouTube videos and articles are some of these decks finally breaking the shackles of being concepts and become real contenders.

When Crimson Vow came out, I was excited about Olivia, Crimson Bride. Jund Reanimator was all that was on my mind for weeks after the release. Sadly, that deck is just bad. Exiling the reanimated creature after Oliva was removed was terrible with the abundance of Fading Hope and other cheap removal.

I tried several ways to counteract this even adding Drana, the Last Bloodchief as redundant copies of Olivia and another Legendary Vampire to counteract her negative effect. However, the deck just wasn’t there. Even without her, the set up for the deck was just too taxing in an aggressive standard, setting up only to be taken down by a single spell. As a result, the deck fell to the bottom of my decks page on arena and there it stayed. 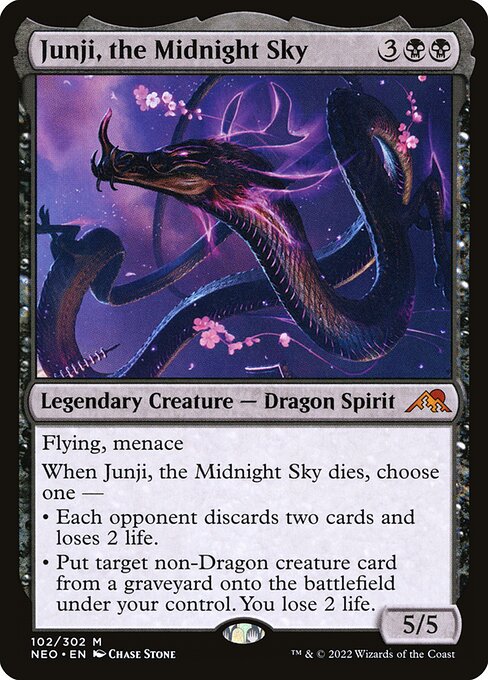 At first glance, this is just a way to reanimate when Junji dies. But in practice, you realize that Junji adds a level of resilience to the strategy as he is nearly unblockable on most boards. The mighty dragon requires removal. So basically, it eats the first removal spell only for a much larger threat to fill the void and if not, he will win the game against boards that can’t race him.

He is also reasonably costed so if he gets bounced its not the end of the world and outside of Vanishing Verse, he can’t be beat. Junji’s partner in crime is Undead Butler. This little guy is so overlooked and it is criminal. I added him to the deck just to have a mill effect, but I quickly learned that you can loop butlers to shoot through the deck incredibly fast. Butler also returns a threat to our hand which adds to the level of resilience the deck now has.

With Junji and Butler really stretch decks thin on removal so when we add in our main reanimation spell Diregraf Rebirth which we can get two uses of anyway, A lot of midrange or control strategies just can’t beat us because we just keep coming.

This is the build I settled on:

Standard Reanimator
by The MTG Hero
Buy on TCGplayer $300.11
Standard
Combo
best of 3 Infernal Grasp is our only real way of dealing with threats early. Thirst for Discovery is fantastic card draw and helps us find spells we need. This is critical for surviving the early game.

Against aggro we have a full set of Culling Ritual. This spell is wonderful as it wipes the board and gives us mana, this sets up a nice combo with Diregraf Rebirth which gets a reduced cost for every creature that dies. We can also take all the mana from and just slam a threat from our hand if we destroyed enough. We also have standard all-star The Meathook Massacre to help out keeping pesky creatures off the board.

Once we make it into the midgame things start to turn for our favor. We want to set up our reanimation. Tovolar's Huntmaster and Koma, Cosmos Serpent are our prime targets. Both are insanely powerful if they go unanswered, but there are several board states where one may be better than the other. Huntmaster is generally the hardest to answer as even if it eats a Grasp, we are guaranteed 4-power from the wolves, but it is exiled by Vanishing Verse. While Koma is better against decks that don’t have instant speed removal or Orzhov where they mostly have Vanishing Verse. Huntmaster also gives us the most bodies on board which means it is favored versus aggro.

Against decks with a lot of removal that isn’t pressuring us Junji, the Midnight Sky is the best target as it adds a level of redundancy to our deck. It must be dealt with, but then brings in a much scarier threat. Undead Butler also does this but to a lesser extent. It makes attacking into us much harder when they know we will get a Koma or Huntmaster back. Also if it eats a removal spell, it’s discard effect is basically a free 3-for-1 as the opponent lose 3 cards while we just lose 1.

Just become a control deck and hard cast your stuff. They have a lot of exile effects, so reanimation won’t get there. Bringing back Liberator with Butler to be looped is a great cheap play to look for.

This deck has been a long time in the making and I am so glad that I can finally bring it to light in Standard. I was a big fan of the reanimator deck in original Innistrad standard and played it for a long time, so this was very nostalgic for me building the deck. While my precious Oliva Voldaren couldn’t make reanimator a deck, Juni certainly did.

This deck is a blast to play and very rewarding when played correctly. The biggest issue is sometimes decks are just faster than us, but if you can come to terms with that and enjoy slamming big powerful spells, then I can’t think of a better deck. Until next time Planeswalkers, Hero out!