Hey everyone! We’re a week into Kamigawa: Neon Dynasty and I’ve been having a fantastic time jamming as many drafts as I possibly can. I always spend the first week experimenting to try to find all of the hidden gems in the format and I’m excited to share all that info with you, my awesome readers.

Here are the cards that have over and underperformed their expectations in NEO, or as I like to say, now it’s time to see how wrong we all were during preview season. Ratings have also been updated on our Limited Tier List: 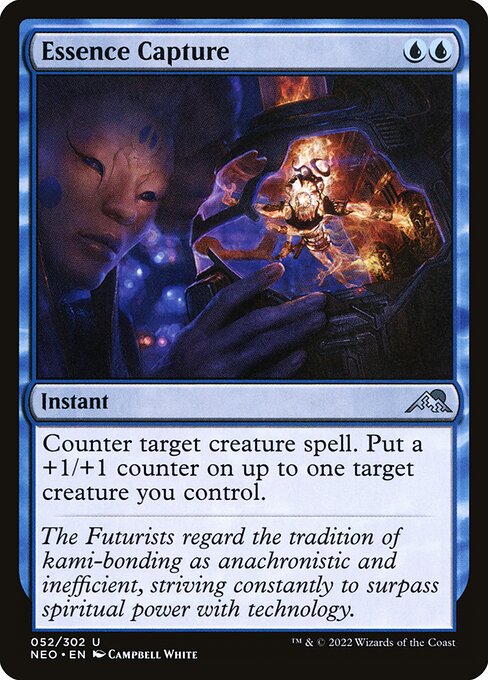 I was really, really wrong on this one because I made the classic mistake of basing my opinion off of past experiences with this card. There are so many sagas and ninjas being played that trying to hold up a creature counter feels futile. Holding up double blue is also a pretty big signal to your opponent that this is coming.

I’m relegating this to the sideboard for when I run into a creature heavy deck and that’s about it. 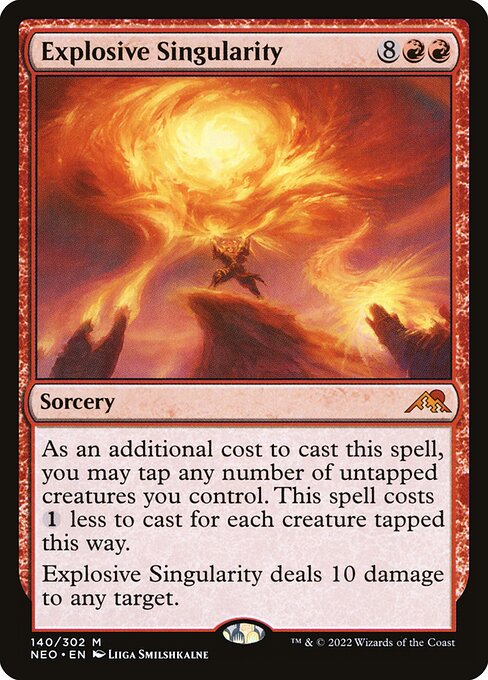 Stop trying to make Explosive Singularity happen. It’s not going to happen. It just spends most of its time hanging out in your hand being uncastable.

The singular time it is good is if your opponent happens to be at ten or less life while you have a combination of ten mana and untapped creatures. That’s not even getting into when this is countered and you just left yourself wide open for a beat down. It is very memeable, but don’t let that trick you into playing this. 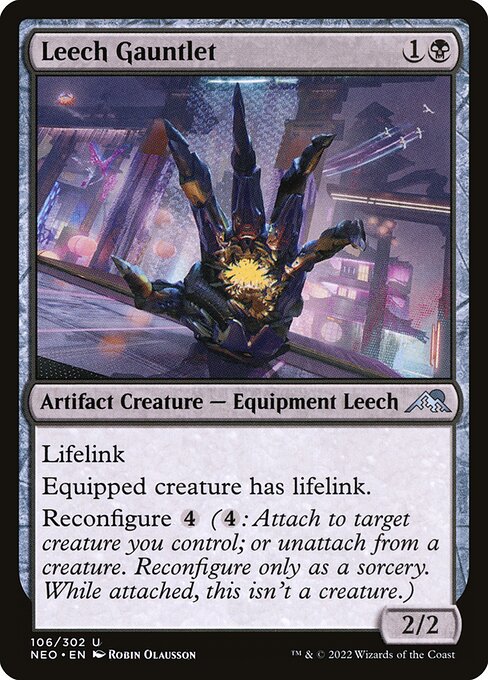 Poor Leech Gauntlet is a victim of Neon Dynasty not being a hyper efficient, racing format. In Crimson Vow, lifelink was such a huge deal because you were either racing against damage or time. In Kamigawa, if your opponent is playing a huge value pile they don’t care that you gained eight life because they went so far over the top of you that they could get you down from a hundred.

It also doesn’t line up well against most of the other playable early drops in the format. You either end up trading it off while gaining two life or let it hang out until you have four extra mana and something big enough to matter. 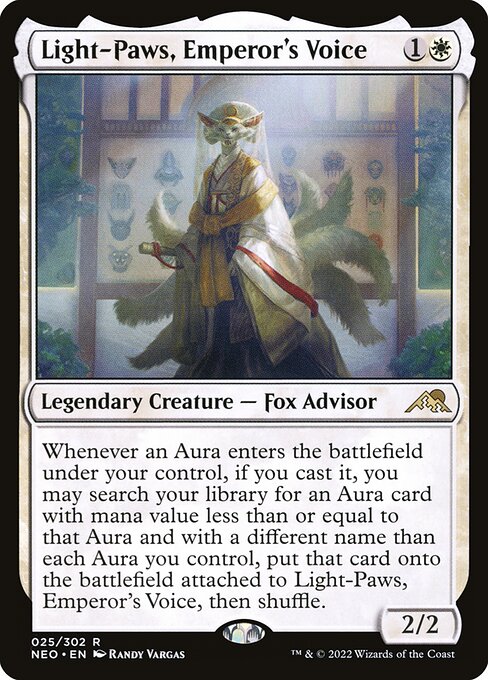 A Grizzly Bears is just not good enough to make the cut in this limited format. Everything else just produces too much value or is much larger than this little fox. While it does have a very small chance to trigger, it is such a narrow possibility that it’s not worth including an otherwise under powered card in your deck.

Malicious Malfunction is still a fine sideboard card against low to the ground decks, but there are a lot of times you just end up staring at this while your opponent dumps a bunch of sagas and large butts all over the battlefield. Ironically the decks that this is usually best against are the ones that could play it. I can’t tell you how many times I’ve looked and realized that it killed literally every creature in my ninja deck. 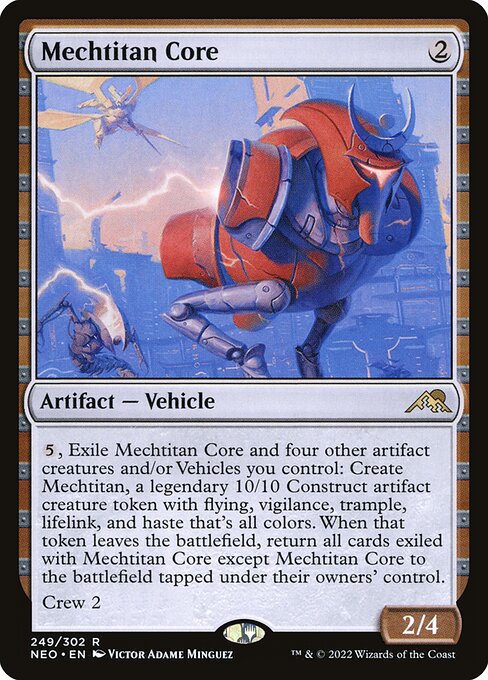 I was a lot lower on this than some of my contemporaries, but it turns out even I was too high on this rusted up piece of rubbish. On it’s surface it’s really hard to justify playing this for it’s stats so it’s value is almost entirely derived from being able to assemble Voltron.

To be fair, I have already seen many memes of this from both the people that managed to pull it off and the ones who wrecked those who tried. It’s not easy to have this with four other artifact creatures and five mana. Even if you do they can remove it, Arrest it, or even worse, counter the ability with Mirrorshell Crab leaving your side exiled forever. 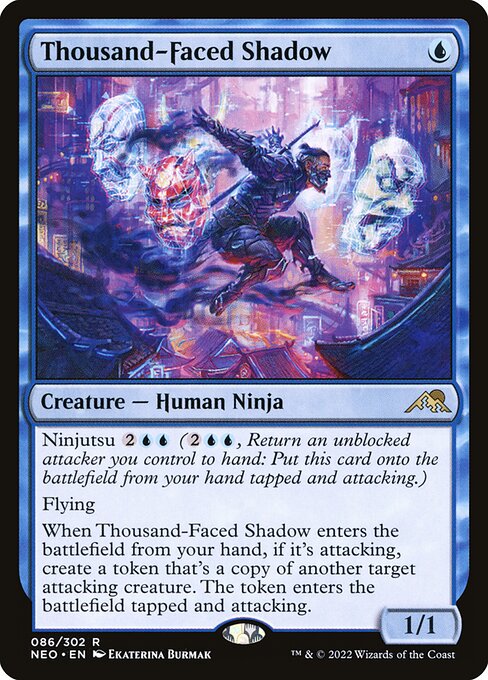 This is still a fabulous ninjutsu enabler and it has the potential to really blow up causing the game to snowball in your favor. The problem is that it can get really awkward sometimes because you need a creature to get through while still having another attacking creature. It’s still a great creature, it just hasn’t quite played up to my expectations. 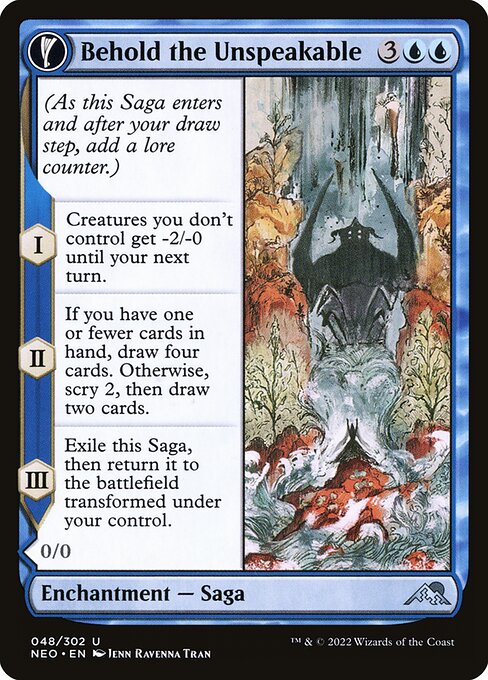 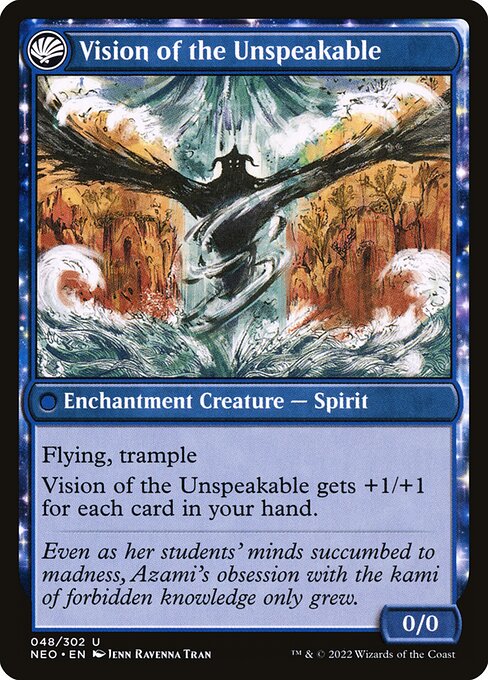 Behold me about to win this game!

I was originally very high on this, but let some people talk me down to thinking it was just another card draw spell. Instead, we are looking at a major bomb baby! Normally the big drawback on card draw is the beating you take that same turn, but this puts a halt on that before refilling the grip and leaving you with a huge monster.

Pro tip: Put a stop on your draw step if you have a single card in hand going into step two. That way if you draw an instant, you can cast it before Behold triggers and still draw the full four cards. 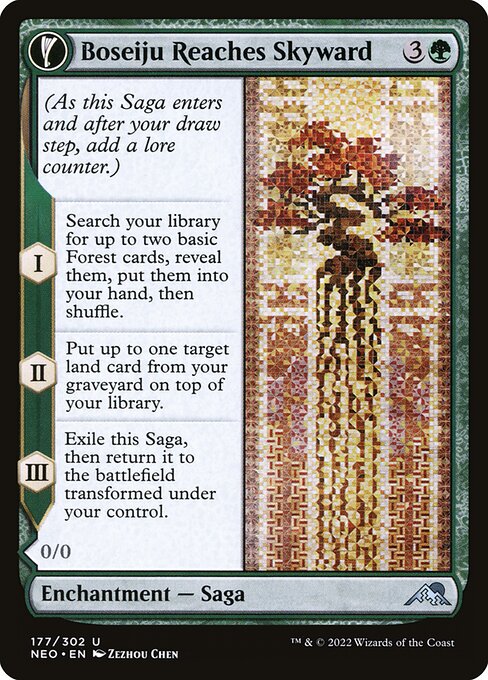 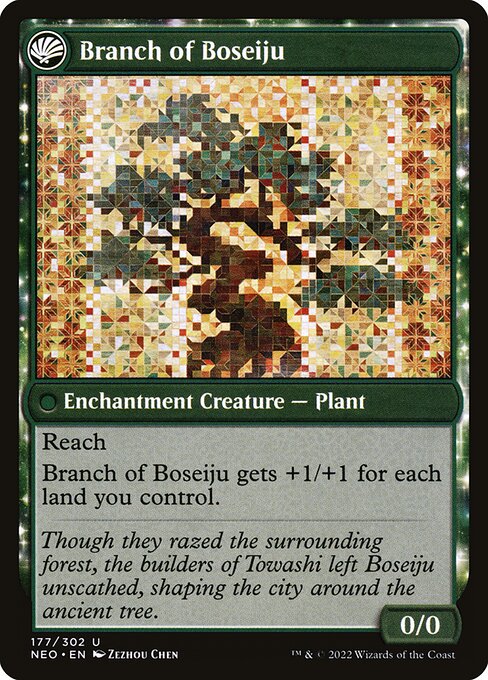 The major concern for Boseiju Reaches Skyward was that you would get run over waiting for it to do anything that actually affects the board. Luckily Neon Dynasty grants you the opportunity to durdle like a champ before burying your opponent in value.

Even though it’s guaranteed to be Forests, drawing two cards is still card advantage that ensures that you’re going to be hitting your land drops to turn this into a huge beast that can dominate the board.

As an added bonus it has the amazing ability of “secret reach” so you get to watch your opponent’s creature crash headfirst straight into this tree. 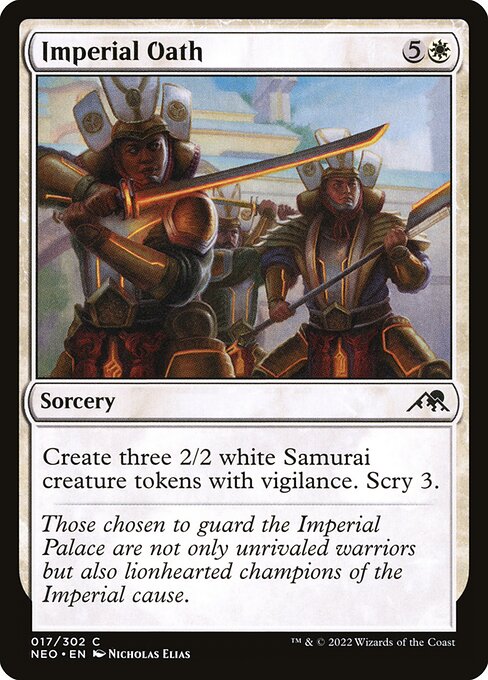 Imperial Oath pumps the brakes on any deck that was trying to attack on the ground while setting up your next draw steps. It works wonders in any midrange deck and is even worth a splash.

The only reason I initially had this lower was that I was worried that six mana was going to be too much. The slower, grindy format along with a ton of opposing 2/2s to trade off with make playing a couple of these well worth it. 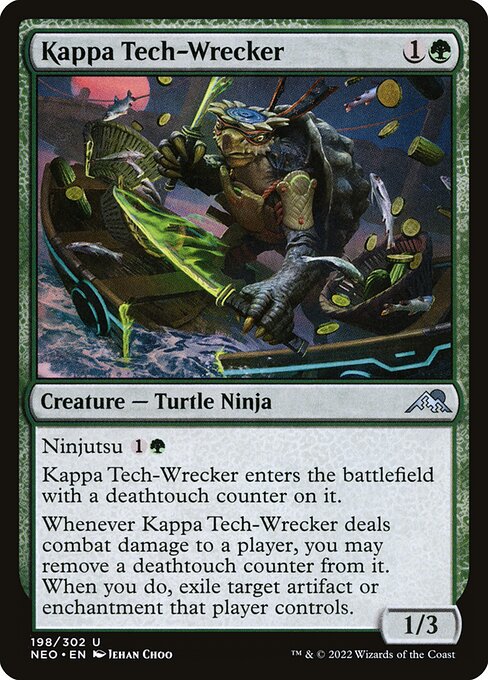 Who would have thought that Throat Slitter is good? Leonardo comes in like a wrecking ball and is definitely in the running for top uncommon in the set.

The deathtouching 1/3 plays amazingly in this set and puts them in a lot of no-win situations when it comes to blocking. Of course, you could always just ninjutsu it and kill their best artifact or enchantment. Either way, take this turtle early and often. 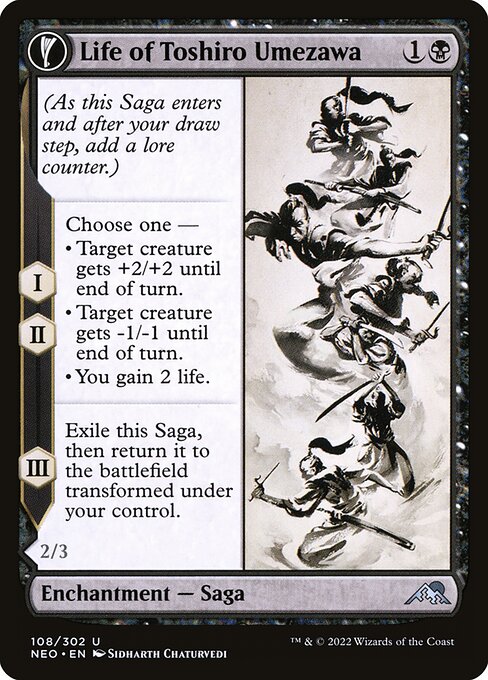 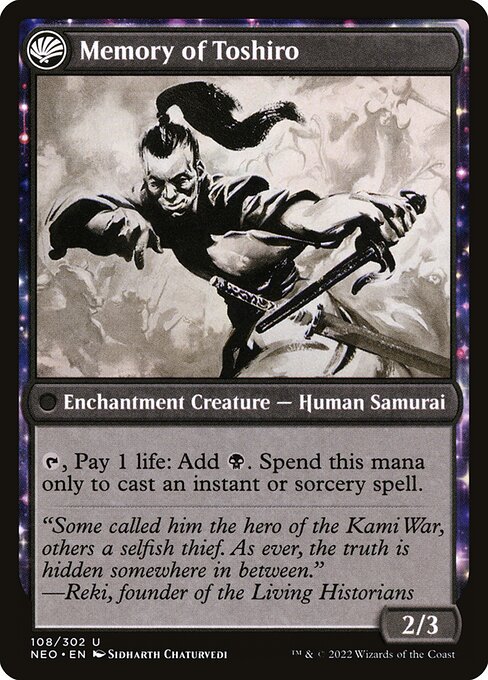 Now this is a life worth living!

There are a ton of one toughness creatures being played so it’s not hard to drop this on turn two for the free kill which also prevents them from playing anything else this can pop off the next turn. Then you get to either gain two life or pump up the jams on your own creature before turning into a perfectly reasonable 2/3 all for the bargain price of two mana. I don’t know why I doubted Umezawa's Jitte, but now I’ll happily take this early. 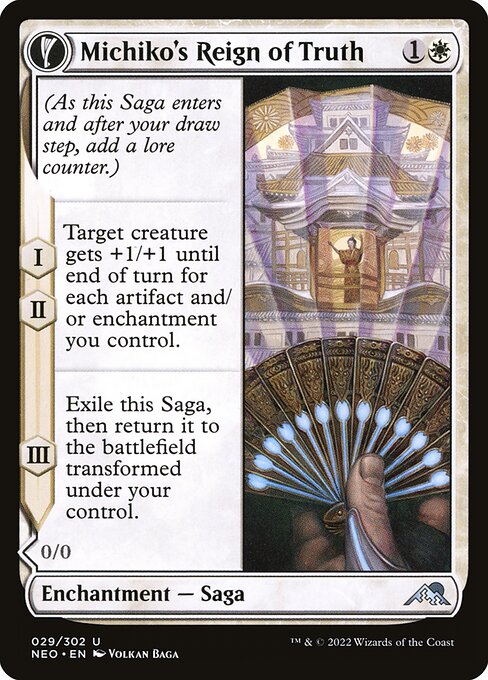 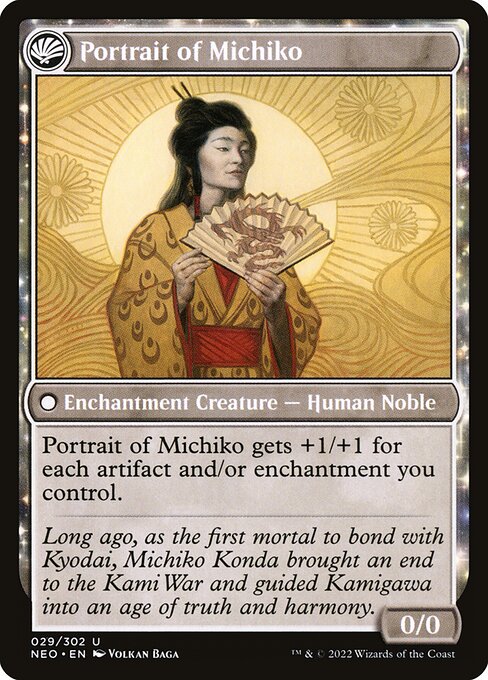 I knew this was going to be good, but I didn’t think it would be THIS good. There are so many incidental artifacts and enchantments that this blows up way faster than you would think.

Giving one of your creatures an extra 7 power and toughness twice is going to either leave your opponent at deaths door or require some chump blocks. But wait, there’s more… You also get a hefty creature afterwards. You get all this for a single payment of only two mana. Even though you don’t normally want to play this on turn two, it being so cheap matters when you’re double or triple spelling early. 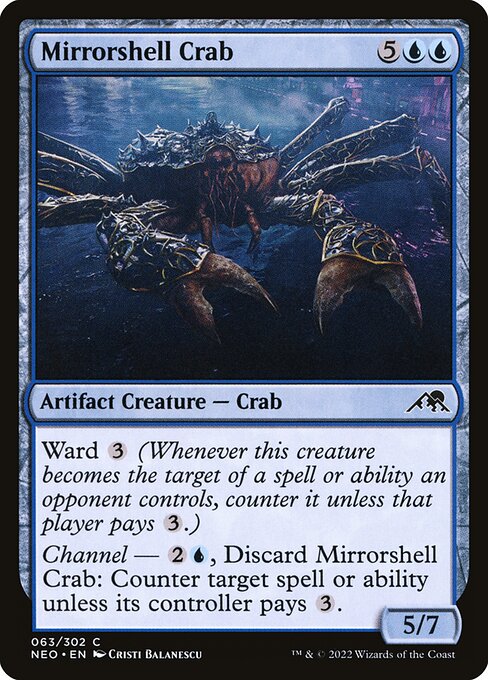 The best counterspell in the format turns out to be Mirrorshell Crab because it only requires one blue mana and hits anything including abilities.

Later in the game the huge body lines up so well against everything on the ground with the ward to protect it. The only thing holding this back is a card like Scattered Thoughts to cast if your opponent doesn’t cast anything worth countering. 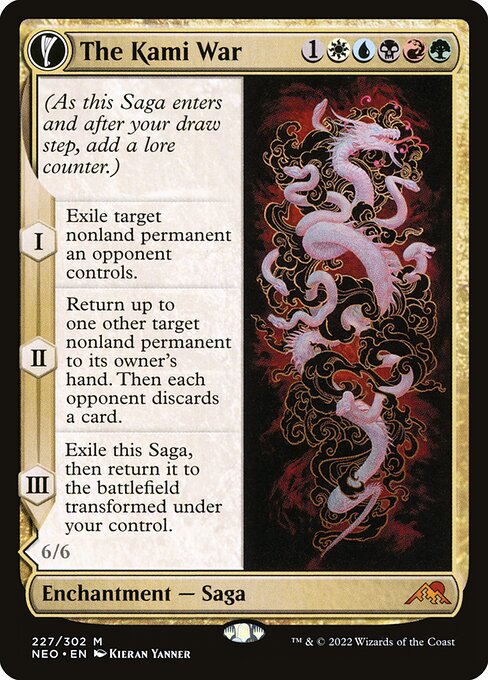 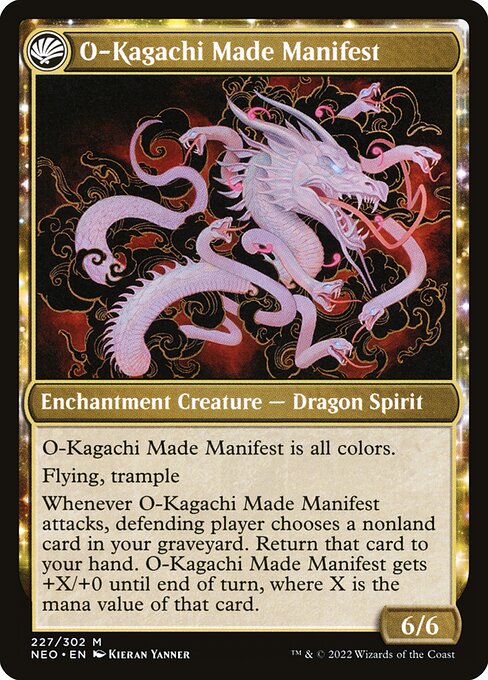 There is actually enough fixing that you can pull this off and when you do it is a huge beating. The problem with it is that you have to prioritize fixing over actual valuable picks while also giving yourself a sketchy mana base for casting the rest of your deck.

While it does have a high win rate due to being an absurd card if cast, it has a very low win rate when not drawn. This shows that all of the little ways you’ve handicapped your deck to accommodate this really add up when you don’t draw your busted mythic. So while it would be even higher, you have to consider the cost to the rest of your deck when grading it.

That brings us to the end of this little trip back through Kamigawa. Thanks for joining me and I hope this update helps you stack some trophies!