Welcome back to the exciting return of Brewing in a Top Hat!  After a brief hiatus to deal with the real world (new job; now I make video games!  Dream come true!), I am ready to play some Magic! Kamigawa has me excited to brew, because I see a ton of potential in this set. The art is incredible, and all the signpost uncommons have a ton of constructed potential outside of their draft archetypes.

Just a quick reminder of who I am for any newcomers to the site. I am a “Johnny” style player that likes to build for fun. That being said, winning is more fun than losing, and I do still make it a point to push to mythic each month.  So I am not a strictly-for-fun player.  I have been playing Magic since Urza’s Legacy, taking a brief break in college. My most played formats are Modern, Historic, and Commander, but I occasionally draft and play standard/Alchemy as well.  My favorite decks of all time are The Rock, Tooth and Nail, Lands, Dredge, and Field of the Dead.

Let’s start off the return to brewing with a fun little combo deck based around the new Izzet uncommon: Enthusiastic Mechanaut. The combo revolves around utilizing the mechanaut alongside Birgi, God of Storytelling and card draw artifacts to push through a big portion of your library. It finishes its opponent with several well-charged Dragonspark Reactor. 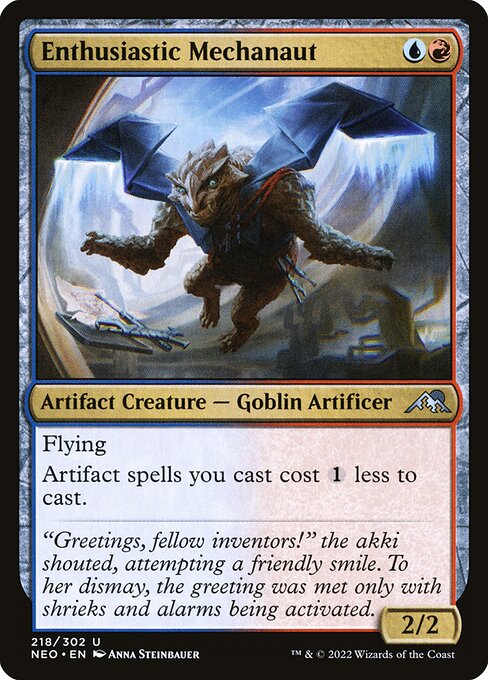 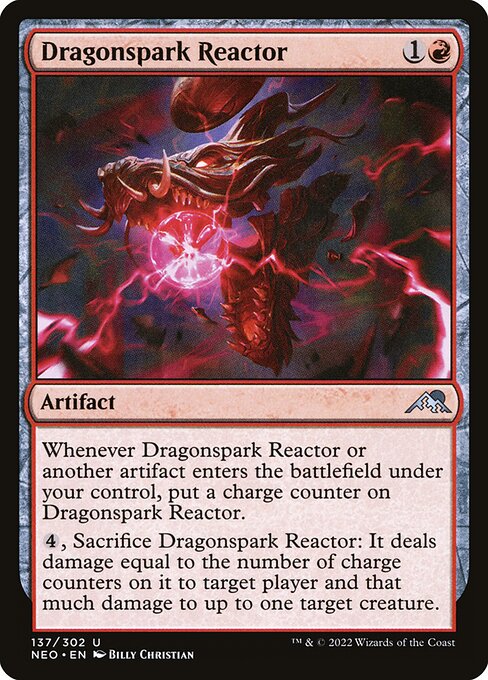 One of the nice parts of this combo is that it doesn’t have to go all-in on one turn. With how the reactor works, you can save charge counters for the following turn. So, unlike many other solitaire style combos on Arena, the game doesn’t end in a loss if you brick a draw. This leads to a somewhat resilient combo that is able to end turn and untap if the need arises. 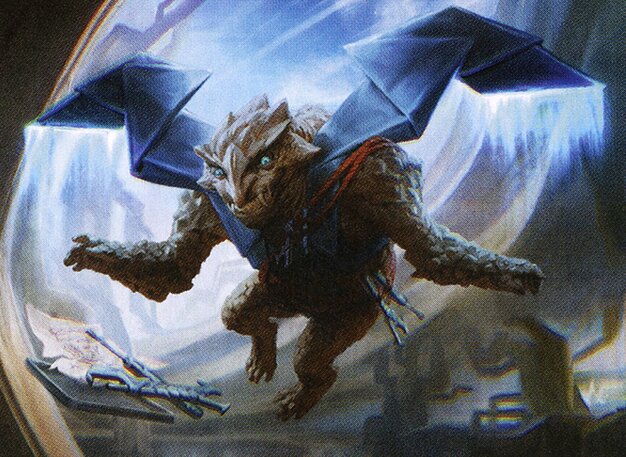 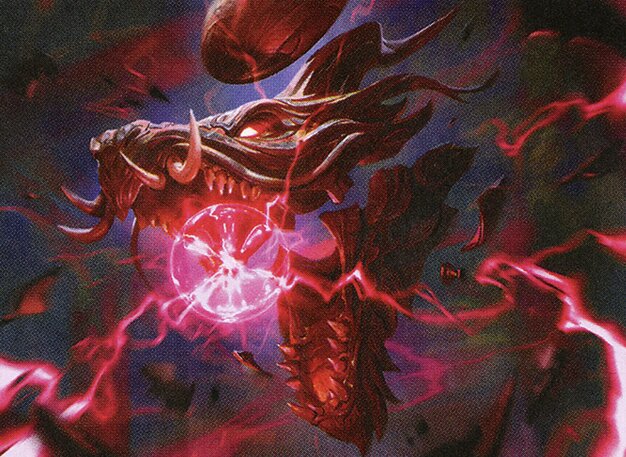 4 Enthusiastic Mechanaut: The first linchpin of the combo makes almost all our other spells cheaper.  You need to be vigilantly protective of this fragile little guy.  Don’t play him on turn two if you think your opponent might have removal.  Generally I like to have a Birgi out before I play him, then try to start the combo, usually on turn four.  However, against creature-centric aggro, it is better to play him on curve on turn two, then Birgi on three, and start the combo on four.

4 Skyswimmer Koi: Copies five through eight of Harnfel, Horn of Bounty.  Adds draws to your artifact plays and the discard is neutralized by Containment Construct.  Didn’t this effect used to cost 2?  More on that later…

3 Dragonspark Reactor: You don’t need to break a huge one to win.  A lot of games, or maybe even most games, it is okay to pop one early to remove a threat and get early damage in.  The less life they have early the less you need to combo off.

3 Containment Construct: Not an essential combo piece, but makes life way easier on you.  Works with Harnfel and Koi obviously, but you can also channel Otawara to bounce something, either in defense or to get more card draw, then play it.  Channel is a discard, like cycling.

4 Jack-o'-Lantern: I swear this card was designed for this deck.  It costs just 1, so it is free once you get a Mechanaut, and with Birgi added, it starts to generate mana.  It also allows us to turn all that red mana from Birgi into blue if we need it after we card draw.

4 Wedding Invitation: Card draw artifacts are essential to our deck.  Remember you can use these to push through an attack to get some extra damage in if you’re close to ending the game with reactors.

4 Spare Supplies It is okay to play one of these early if you are missing a combo piece.  Try to tap your other artifacts with Moonsnare first just in case you need to break one of these for a card draw.

1 Eye of Vecna: We dropped down to 1 from 4 because the life loss really piles up.  Still it draws a card with an all colorless casting cost, so we can’t afford to ignore it.  There are only 3 cards in standard that have that effect, and we use all of them.

4 Moonsnare Prototype: This card is very powerful.  Do not sleep on it.  It lets us ramp of course, but later on we can bounce it with Consuming Tide then channel it to stall, and if we chose to keep Containment Construct off of Tide, we can re-cast it after we channel.

4 Shatterskull Smashing: In a list this tight, letting us put removal cards into the land slot is so good.

2 Consuming Tide: A board wipe that also lets us re-cast our draw artifacts is very strong.  The fact that it’s four mana and we also get to keep out one of our combo pieces (usually Birgi, but sometimes Reactor) is just gravy.

My sideboard philosophy is to heavily edit your list based off of the decks you are running into.  This is meant to provide a place to start, not be a definitive list of how to do what.  Thinking about the match up you’re in and having familiarity with the deck you’re playing is the best way to use these 15 cards.

4 Boarded Window: You want to bring these in against decks that want to go wide.  If they are flooding the board with lots of smaller things, this card can stall for time.  Stacked on top of each other they can be stifling.

2 Burn Down the House: This is for dealing with larger threats that are a bit slower like midrange decks, or for the rare super friends control deck you might stumble into.

1 Lantern of the Lost: I haven’t seen many graveyard strategies for this to be useful against, but having another artifact that can draw cards has been helpful in some matchups.

2 Field of Ruin: There are just way too many man-lands running around out there.  Remember if facing the blue one to activate before it turns into a creature if you want to avoid the ward it gains.

2 Consuming Tide: The ultimate board wipe that also allows us to play all our draw artifacts a second time comes in against decks that want to go tall by building up counters on their creatures, or by playing expensive threats.

2 Abrade: Premiere removal in this format.  Every deck with red in it should have at least two.

Other Cards, Budget Options, and Historic

Here are some other cards that I tried and evaluated for you.  Some were playable and some, not so much.  Adjust for your collection to craft the version that works best for you, without blowing all your wild cards.

I thought about trying it out in the Historic format, but the issue there is why would I play this over Breach, which is just more resilient?  Or Kethis, which has tons of new legendary toys to play with?  If this does not dissuade you, first of all, kudos, I like your style.  But also, here is a list of cards I’d make sure to try out if I were to attempt it:

Rust Monster : Play a bunch of artifacts, then make him unblockable with Wedding Invitation.

Tameshi, Reality Architect: Adding a third color is not feasible with the current standard mana base, so I never got to try it.  It looks like it could be quite fun in Historic.

Underworld Breach: This card is just perfect for us.  Lets you recast cards you sacrifice to Goblin Engineer for supreme value.

Fast and Shocklands: Better mana base is a no brainer, and I think this would be where you start.

Goblin Engineer: Tutors are traditionally the combo pilot’s best friend, and we want to play artifacts anyway.  Getting extra draws off the artifacts we sacrifice is nice.

Faithless Looting: Allowing us to filter our excess lands to see more cards would allow us to actually use less lands in the 75 and still maintain consistency.  You could go down to 18 most likely.

Unholy Heat: Artifact, Creature, Sorcery, Land.  Extra easy with Faithless Looting.  This card is exactly what the deck is missing.

Mind Stone: This is the only mana-positive 2 mana rock we have, but the fact that it draws a card seems very good, especially when combined with…

Lurker of the Loch”]: In conjunction with Goblin Engineer this seems like a strong way to keep your combo going.

Prophetic Prism, Golden Egg, Guild Globe, Ichor Wellspring: Better draw-rocks are nice, and there are a ton of them in the Historic card pool.

Quicksmith Genius: How about a strictly better koifish?  I knew this card used to cost 3!

Foundry Inspector: Redundancy for the cost reduction aspect of the deck would be nice to try.

Saheeli, Sublime Artificer / Sai, Master Thopterist: Seems like a different direction you could take the deck.

Let me just start off by saying this deck is not the easiest to play.  I highly suggest taking it against sparky a few times before you take it against people. It handles a lot like Kethis, Underworld Breach, or Paradox Engine, in that it is largely a solitaire-style deck with you trying to go through as much of the deck as possible. Knowing how the deck operates in practice is critically important if you want to have any success with it. That being said, don’t be afraid to end your turn and pass, because unlike those other decks, this one can retain its momentum in between turns by holding onto charge counters on its reactors and waiting for an untap phase.

Using your Reactors efficiently is critical. You will most likely need to pop one of them early to remove something that is a danger.  Recognizing when to activate them will separate the pilots of this deck that can win games versus those that just get run over.

Do not play conservatively with this deck. If it feels like you won’t have another shot to win unless you go for it right now, you’re probably right.  This format is fiercely competitive at the moment with several very powerful cards seeing heavy play. Next turn isn’t promised, so combo off now if you see an opening.

Fair warning: do not pick this deck up expecting ranked domination.  It is squarely tier 3.  It can get lucky and steal matches against the best decks, of course, but we are just missing quality, affordable protection at the moment. It is, however, extremely fun even against sparky.  I adore this type of deck, and Arena is the perfect place for it with all its automation of the game. If you enjoy this style as well, I would say it is definitely worth the craft, especially considering how cheap it is compared to my usual brews. I had a fun time building it, and I think there is a lot of potential in this archetype should the right cards get printed in the future.

A preview for next time: I will be focusing on a more aggressive, creature-based list that can cycle repeated card-draw each turn, reanimate every card in the deck, and out-grind any opponent in the standard meta. Oh and none of the cards cost more than three mana. As always, feel free to ping me on the MTG Arena Zone Discord with your brews or questions. Until next time!