Greetings Planeswalkers! Crimson Vow is on its second week in Standard. With spirits, zombies, and vampires taking over the landscape and multiple decks looking to find their spot in the Standard Tier List, I figured I would show you the product of my testing, and what I think could be the best aggro deck in the format. Today we will look at and updated version of one of my more popular decks which was Izzet Blitz, I am proud to present to you, Temur Blitz.

I love “all-in” style decks like Death's Shadow, Infect, Reanimator, Scapeshift, and the list just goes on. In fact, I top 16’ed my first SCG Open playing Kiln Fiend with Assault Strobe and then during college I largely ignored Standard for a long time, but I was called to came back when I saw the Become Immense + Temur Battle Rage for the first time in Khans standard. I was in love, and it dragged me back into Magic’s prime format and rewarded me with many, many top 8’s and tournament wins.

The most popular deck I ever did (going by YouTube views) was my Izzet Blitz deck. I loved that deck a lot. But sadly, a large chunk of it has rotated out. I tried to rebuild that deck with the new cards but sadly, the protection that made that deck so effective, namely the 1-mana counter spells like Spell Pierce proved to be irreplaceable.

I was attracted to spells like Shell Shield but it was just too slow in too many matchups to matter. I considered Snakeskin Veil, but as long time readers know, I didn’t like the idea of skewing my mana for just a handful of cards. Then while testing with a friend on MTG Arena and chatting on Discord he mentioned to me how Wild Shape was perfect since one mode gave hexproof, and another gave trample, plus Dragonsguard Elite (one of my favorite standard cards that I had forgot about) would be perfect as another threat in a spell-based deck. This was an eye-opening moment for me, and I began testing and tuning the deck with the new green cards since I now had enough cards to consider playing.

This is the build I ended up with and it is probably the fastest deck in Standard: 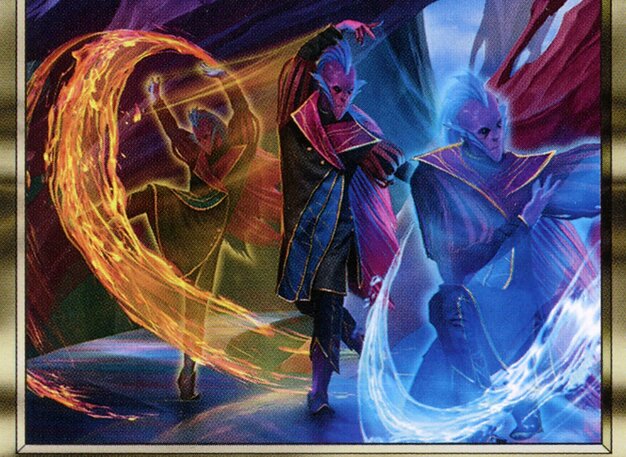 When playing this deck your first decision comes when you draw your opening hand. Of course, you need mana but you also need a threat to put on the board. I will keep almost any hand with at least one creature and the mana to play it. All we need to do is stick one. Think of the deck as you would play Infect or Bogles in Modern. If you have at least one way to protect your creature then the hand will be much better.

Don’t feel pressured into making plays early, and get a creature on board on turn two if possible. I will often lead with Dragonsguard Elite if I have it since it gets counters that stick around, giving it consistent damage. Turn three you have some options. You can cast another creature or cast an Expressive Iteration to stack yourself up for that all important turn 4 kill. I would always leave a mana open for a Snakeskin Veil or Wild Shape to save my creature from removal. It is preferable to chip away and get in as much damage as you can to make your all-in play guaranteed lethal.

Okay, now for the tricky part, combat math. We have two “transformation spells” in Serpentine Ambush and Mordenkainen's Polymorph. These spells are like a super pump effect to any of our creatures. Please note that it DOES NOT REMOVE ABILITIES. It just changes base stats, except for polymorph which gives flying. I couldn’t decide which is better, so I settled on a 3/3 split, since flying on a Festival Crasher or Dragonsguard Elite is fantastic, but ambush is more damage. It just depends on the situation. This will trigger our creature’s ability and make them huge. Often when paired with Critical Hit, it ends the game.

We have 11 ways to give trample versus creature decks. Massive Might is the big new inclusion with Ancestral Anger. Both spells are fantastic since they are just one mana but give a pump and trample. Giant Growth has been power creeped without a doubt. In fact, I don’t think this deck would be possible without them. The other trample spell is Wild Shape which gives our creature better states since it becomes a 3/3 but you should remember that if you cast this spell for trample you need to do it BEFORE you play Serpentine Ambush or Mordenkainen's Polymorph because if you cast ambush first, the creature becomes a 5/5, but Wild Shape turns it back in to a 3/3 if you cast it after. This creature was in early builds of the deck. But it was just so much worse than our other creatures and finding another pump just was not worth the mana spent. This was a main fixture in the OG Izzet list, but since we no longer have cards like Infuriate, there is no reason to include it. We would rather just have another spell to pump our creatures. So, I would totally play this if I had more room. I could see myself finding room for it in the future if Serpentine Ambush or Mordenkainen's Polymorph becomes the clear choice and I trim the effects. Until then, I am happy without it and have not missed it yet.

This is a card I would consider playing if I had the room. 2 damage isn’t all that much in current Standard as 3 is the magic number for toughness and a scry effect isn’t going to change that. With a meta shift, I could see it being played as it does really increase our clock. I would also play another strong pump effect over a burn spell.

This deck is sweet and hard to deal with. It is incredibly explosive and can win out of nowhere with just a few spells. If you are the type of player that likes these “all-in” style decks, then I can’t recommend this deck more. If you are new to the archetype or just a new player in general, remember that this deck can be easy to play but hard to master, you must do math quick and consider all factors when making your plays. Nothing is worse than going all in just to get blown out by an Infernal Grasp.

It is always fun to blast through with a new brew and I hope you have as much fun as I did making this deck. So, until next time Planeswalkers, Hero out and follow me on these platforms!