Hey every one! We’re back with one last stop before the Arena Open on the magical time traveling adventures of The Brothers’ War. Today we’re going to be talking about how to take two (or more) ordinary cards and form a marvelous symbiosis that will leave your opponent wondering what just hit them. That’s right, it’s time for combos and synergies.

We’ll mostly be sticking with commons and uncommons here with a slight possibility of mythics. Maybe something a little crazy at the end because I like to make sure everyone leaves satisfied. 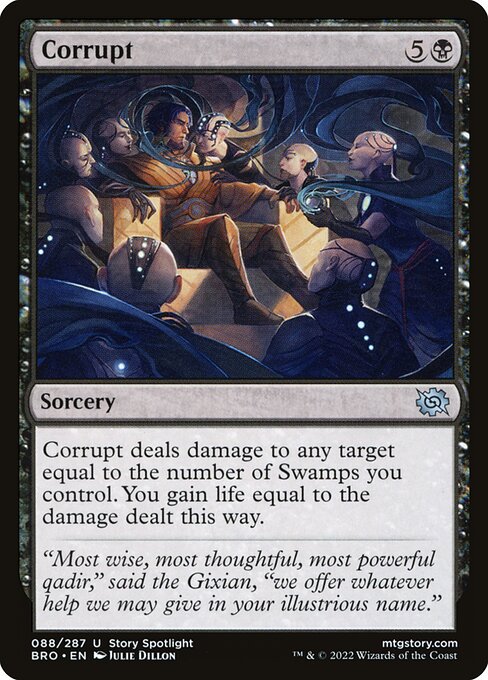 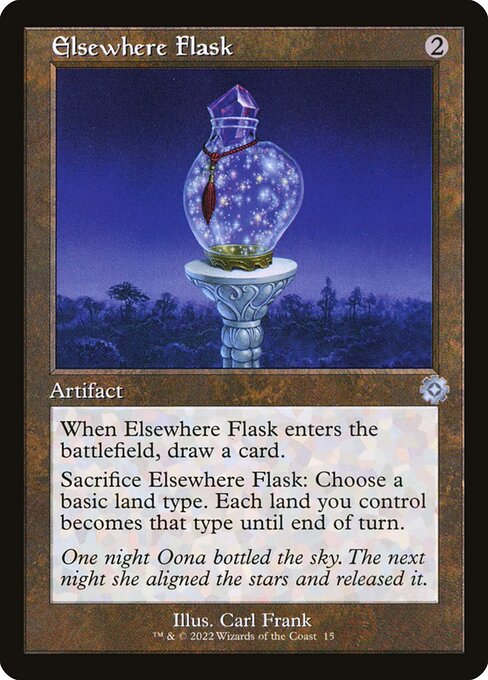 You can’t go mono all the time so this provides the back up plan to still be able to Fireball your opponent out in the middle of nowhere. Sure, you can use Elsewhere Flask with cards like Flow of Knowledge and you’ll probably end up pulling it out after drawing a ton of cards. In this case, it’s better to enjoy the simpler things in life such as ending the game on the spot. 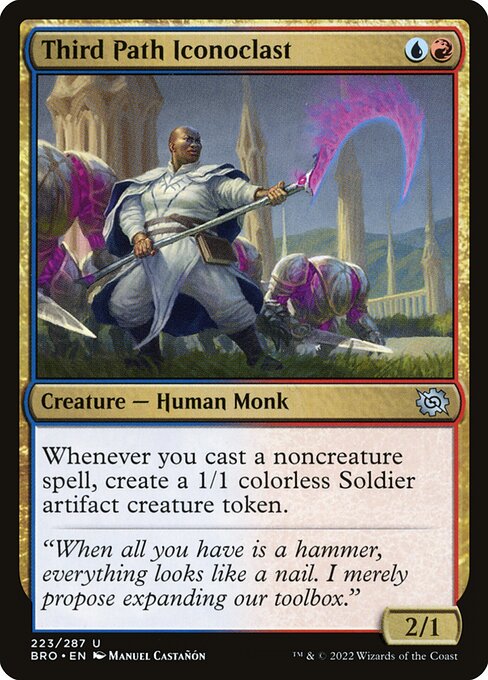 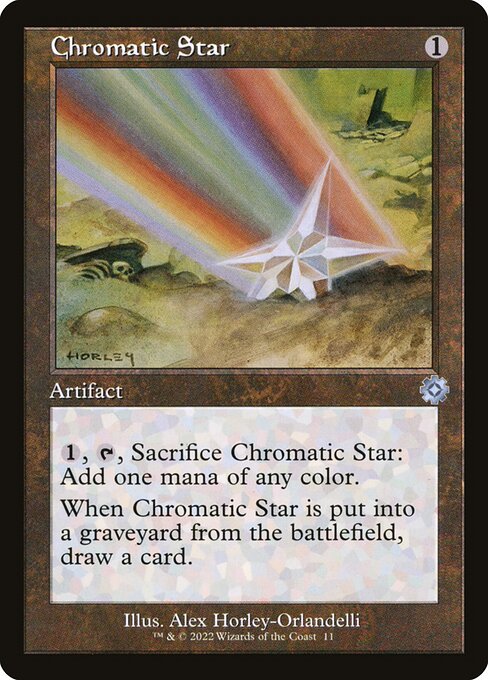 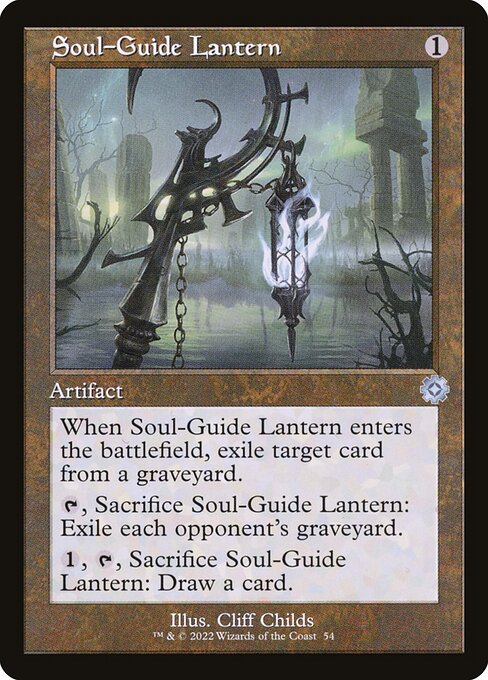 You can’t go down the wrong path when you are making a pile of soldiers that all end up drawing a card. Even janky cards like Springleaf Drum and Bone Saw can put in work with Third Path Iconoclast but I prefer can-tripping away like it’s the 1970s (No. I was not born in the 70s…I might be a dinosaur, but at least I’m a millennial dinosaur…sheesh). 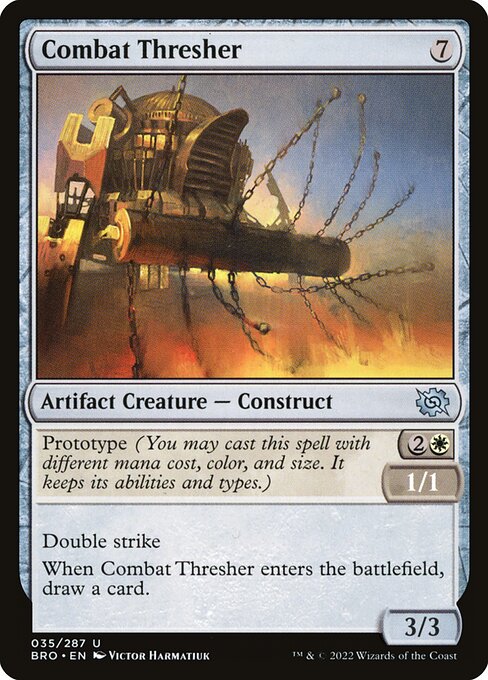 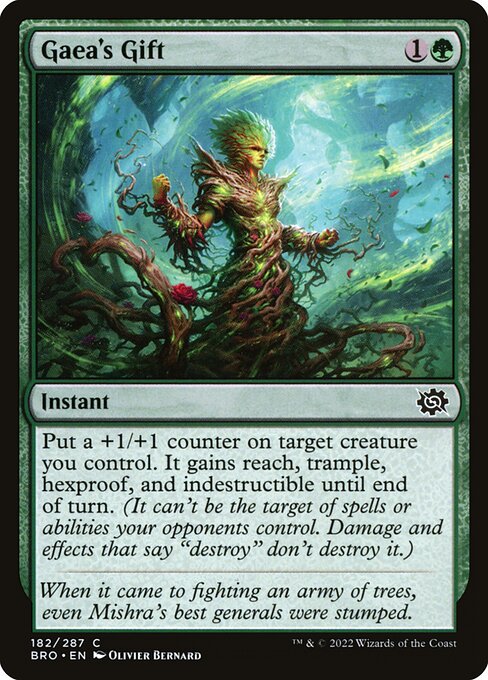 Unfortunately, you can’t open Embercleave in BRO, not even as a Retro Artifact. Can we build it? Yes, we can! Once you’ve successfully gifted the thresher, you know you are free to go nuts on pump spells with Giant Growth turning into six more damage for one mana. I’d tell you to do the math, but we all know that’s for blockers.

Audacity is another option to turn the crazy dial on Combat Thresher up to a ten. 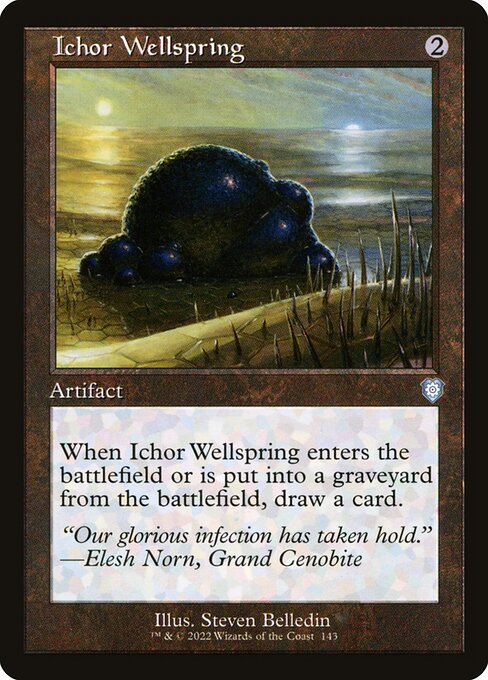 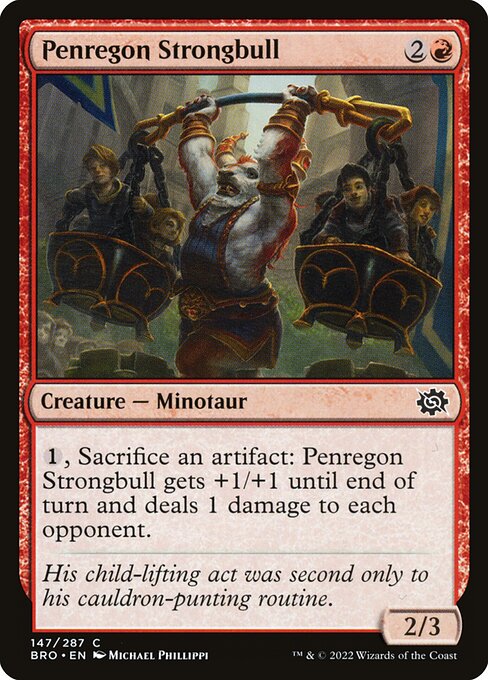 I prefer my Divinations to ping my opponent and pump my creature. I’m classy like that. Both of these cards combo with so many other things in the set, but this is a nice interaction that you might have missed when deciding if you should play Ichor Wellspring. 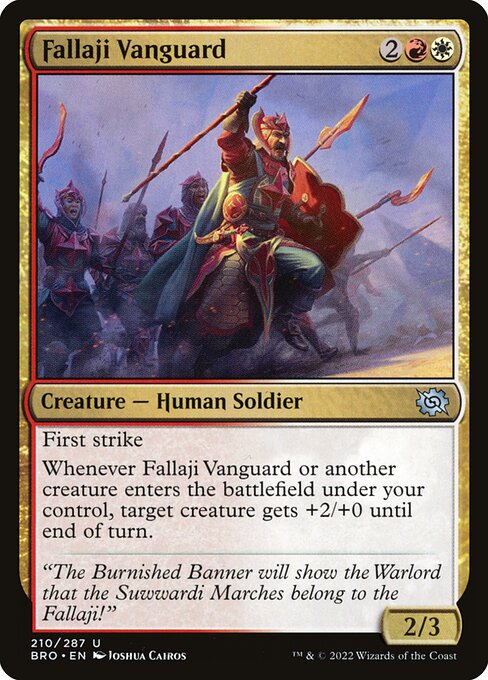 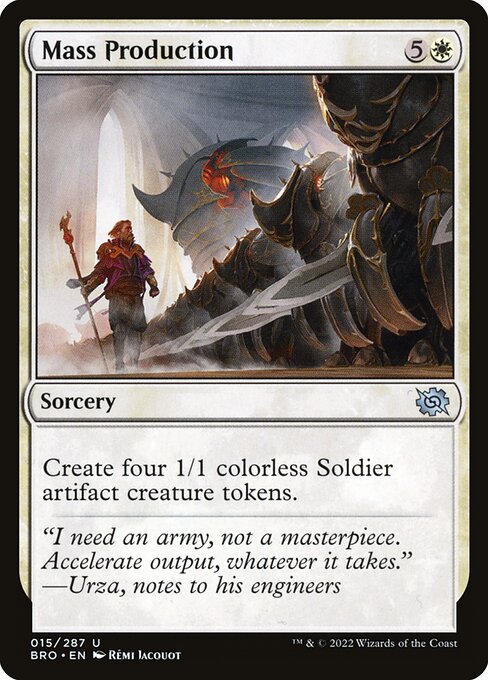 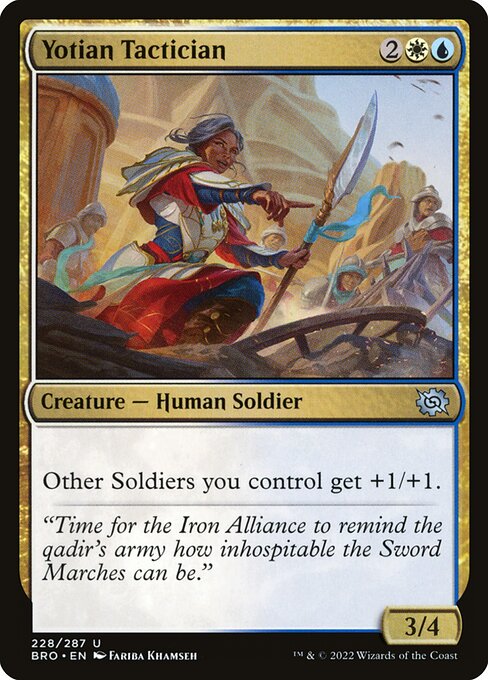 Distributing eight power across your creatures out of nowhere is going to have your opponent quoting George Takei, “Oh my!”.

You can also toss in a Whirling Strike to smash through any resistance. Of course, you can also replace Fallaji Vanguard with Yotian Tactician for another way to take advantage of your new pile of soldiers. 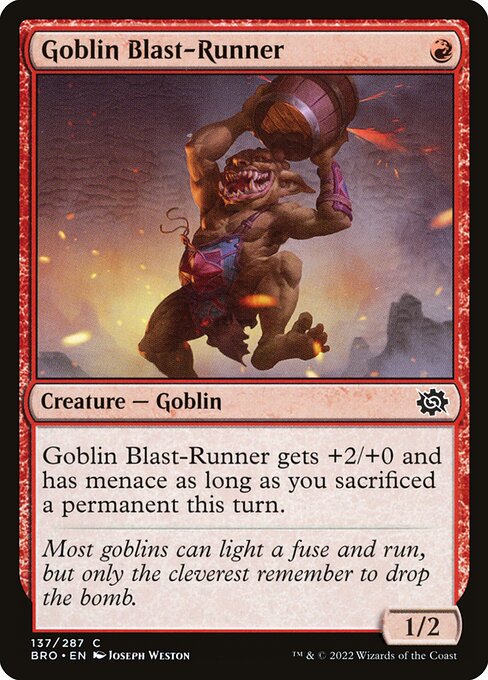 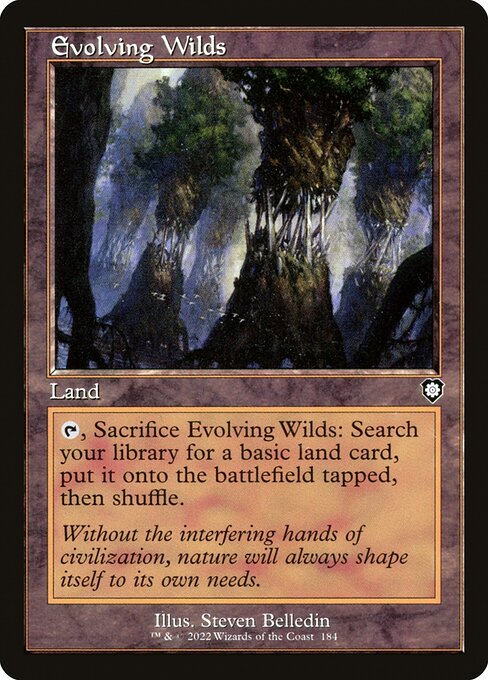 This little beater isn’t picky about what has been sacrificed and evolving wilds is basically a free way to pump up the jams. I’ve talked about this in my other articles, but the possibility of your opponent coming right out of the gate with a couple of these is a great reason to take Disfigure higher. Not that you really needed a reason. 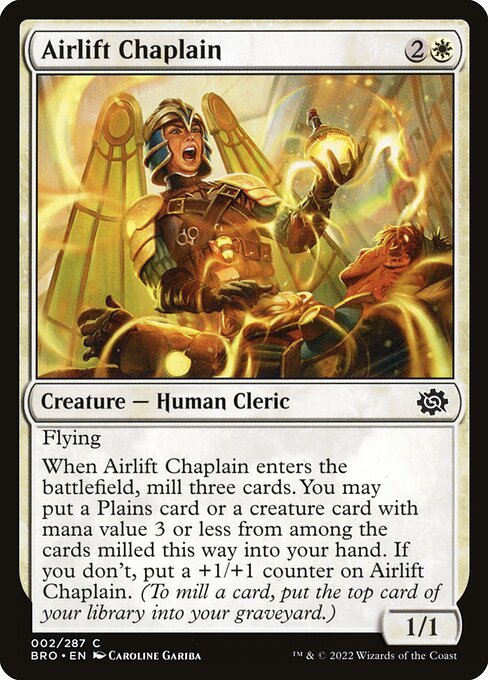 I know you’re thinking, ”Hey… wait a minute, Josh just listed the same card twice, what are they trying to pull on us.” In this case it is because it synergizes with extra copies of itself. It can let you grab another one if you hit it to let the good times keep on rolling. Chaining the Chaplain might sound like an euphemism, but in this case, it is just another way to ride that value pony. 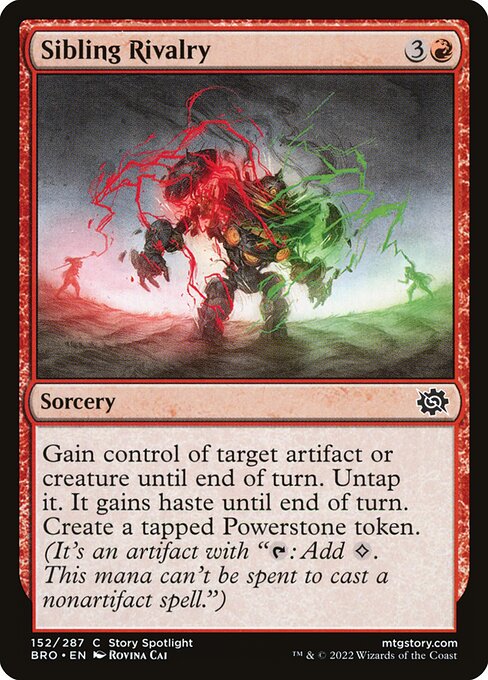 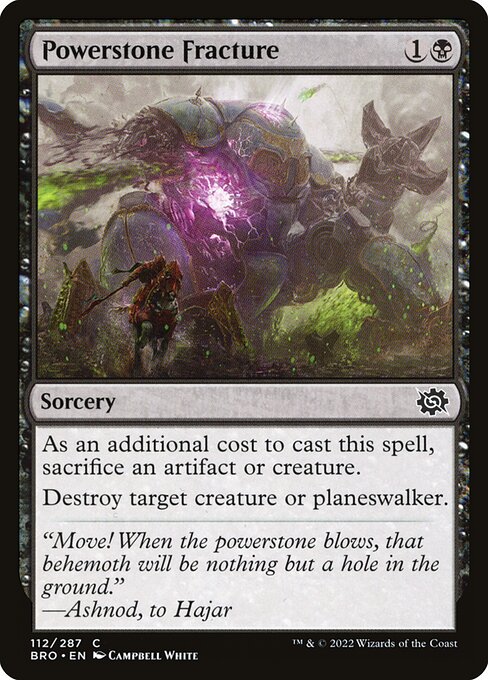 A tale as old as time…we’re not talking about Beauty and the Beast here…we’re talking about stealing your opponent’s best creature before sacrificing it for even more power. It lives up to the name Sibling Rivalry because in the end one person is smugly staring down at the other who is laying amongst a pile of ruin. 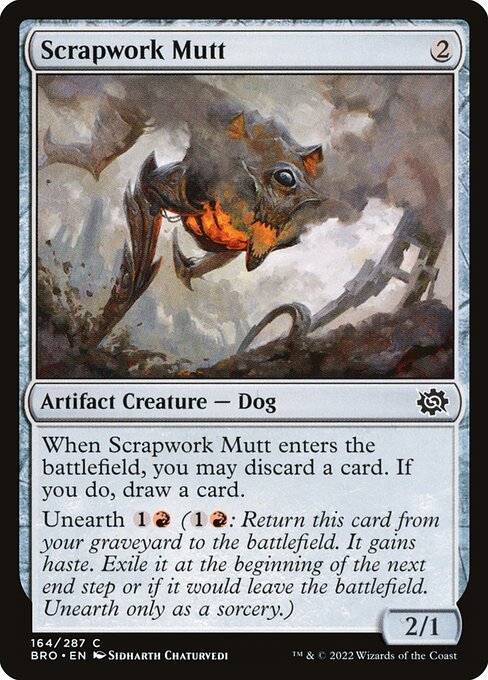 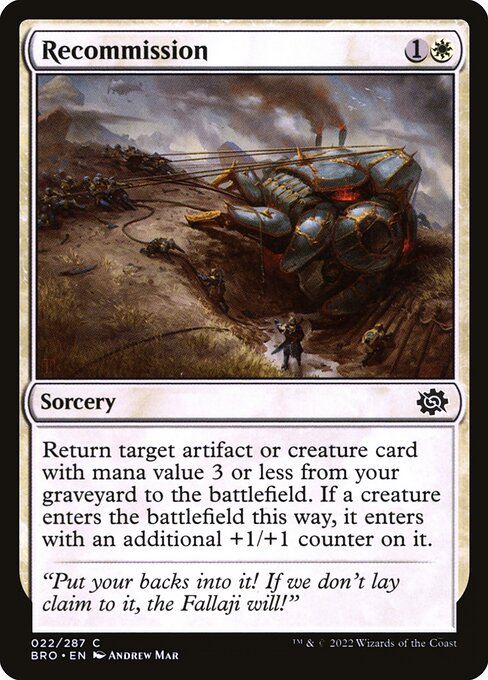 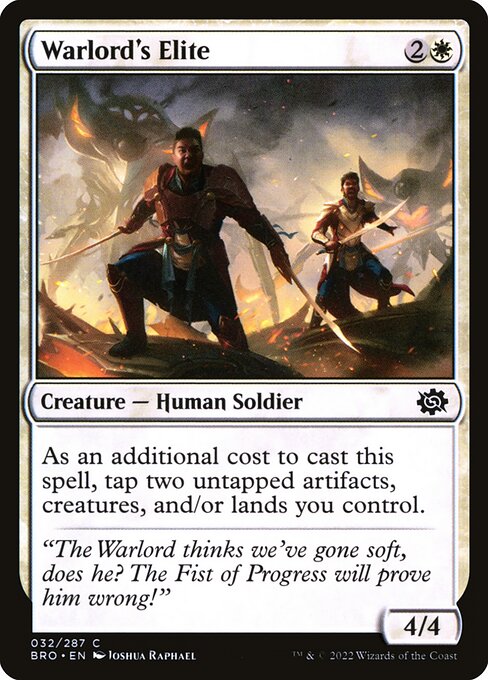 The early Scrapwork Mutt enables plenty of graveyard shenanigans or just smoothing out your draw. In this case it lets you drop a 5/5 for only two mana on turn three. While you can also do a bunch of shenanigans with the five drop reanimators, you need to play some really expensive cards to make it worth it. With this, it’s just early game cards working together to bash some face while even leaving a mana open to protect your new monster.

Precursor Golem and Moment of Defiance 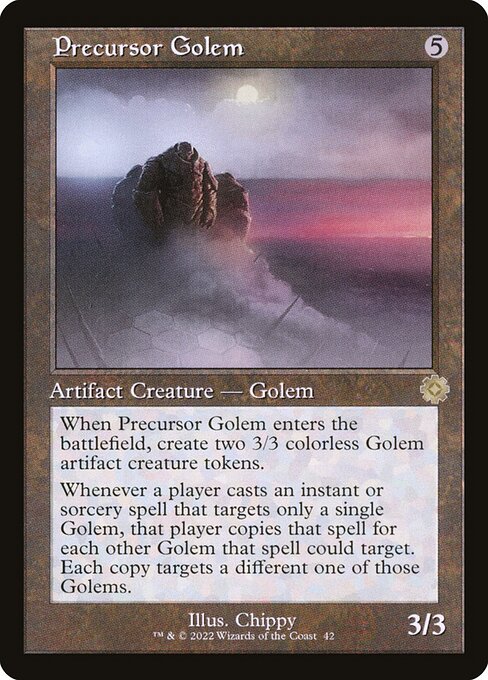 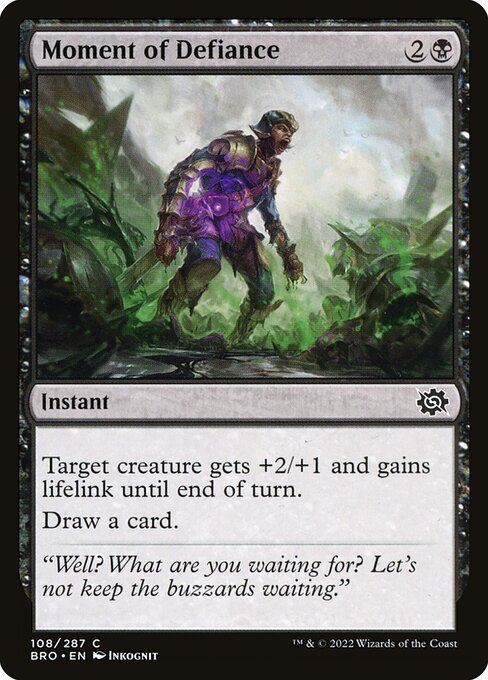 I know I said I was going to keep it to mostly commons and uncommons, but Precursor Golem knows how to party like a punk rocker with defiant moments being passed around the room to everyone.

How many cards are you drawing and how much life are you gaining? Don’t worry about the details. Just assume it’s a whole bunch and there’s no coming back from gaining a whole bunch of life while restocking your hand.

Worried about getting your golem blown up? Loran’s Escape can provide an answer to that.

One additional note about Precursor Golem. It includes all golems, even your opponents. Something to remember so you don’t cast Overwhelming Remorse on an opposing Boulderbranch Golem to wipe your own side. 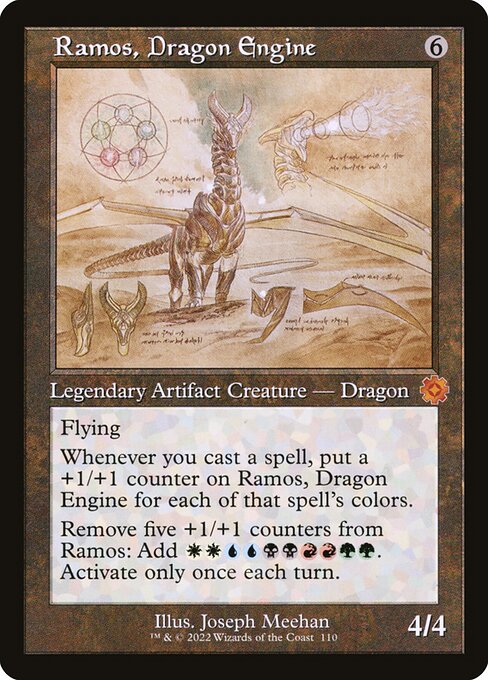 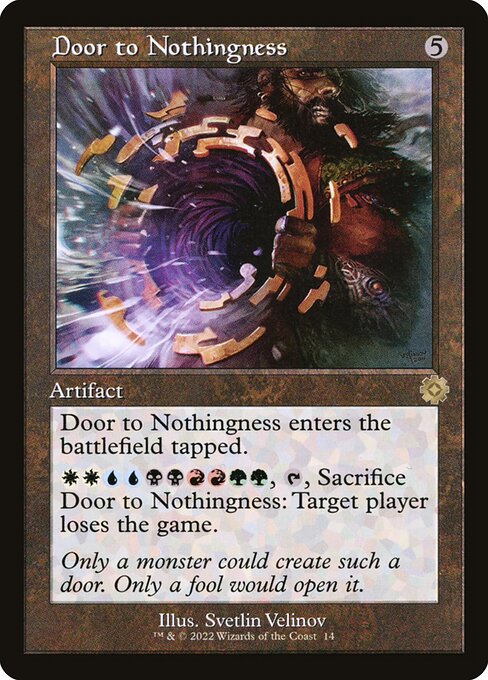 What in the what is going on here… Don’t let your memes remain dreams people. Go out there and make this happen. It’s highly unlikely considering it takes two mythics, requires you to have a bunch of counters on a giant flyer that they already aren’t dealing with, and get an untap step to blow the doors off the game.  We’re not talking about if it will happen, but how legendary it will be when you do pull this off (Disclaimer: Do not try this at home or literally anywhere else either).

My final piece of advice before the Arena Open is to take command of your fate. By that I mean just open Titania's Commandand Gix's Command while your opponents shout obscenities at their screens. As I said in my draft guide, most of the bombs in this set have clean answers to them, but those two are the outliers.

Thanks for reading! Now you’re ready to combo your way to victory in the Arena Open. I’ll have the tier list updated before the open starts so keep an eye out for that. I’m sure I’ll come out with some other articles on my limited antics next week as well…you want to know what they are…too bad, It’s a secret to everybody.