Hello everyone! I have a real treat for everyone today as it’s been a deck I’ve wanted to write about for a little while, but am finally getting around to. To explain, let’s talk a bit about player psychographic profiles as famously outlined by MaRo. There are predominately three different types of players: Timmy/Tammy, Johnny/Jenny, and Spike.

Timmy/Tammy is all about winning BIG. They like playing flash spells and completely stomping the opponent. If you liked winning with Ultimatums in previous Standard, you may be or have streaks of Timmy/Tammy. Spikes are pretty well known, especially if you play a lot of Arena. They are the people who are always trying to win using the best deck, the latest tech, whatever it takes. These I believe are the two most common types of players around as it’s winning big or just winning. However, there’s still Johnny/Jenny. Johnny/Jenny enjoy their wins, but they want to win in style. It doesn’t have to be big, it doesn’t have to be optimized, hell, it doesn’t even need to be consistent, if they can win in a cool way, they’re happy. Well, today’s deck is for all the Johnnies and Jennies that peruse my columns.

I think I’m a pretty strong blend of all three psychographics, but this deck made me feel alive when you get your wins. I love value oriented decks (I famously had a Bant Derevi deck in EDH that could take 20+ actions per turn) and this helped recapture some of that fun. What deck am I talking about? Jeskai Blink. 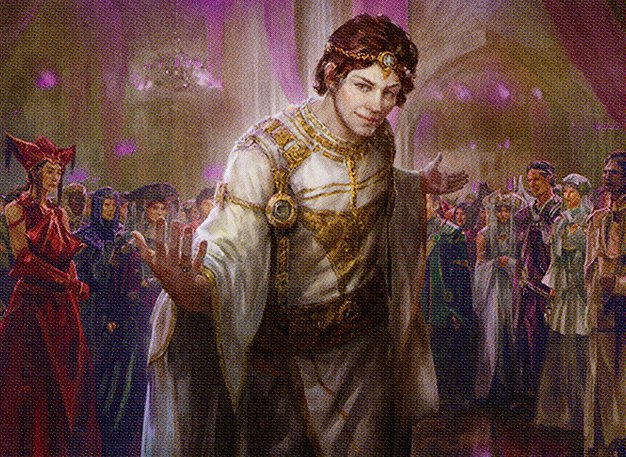 From what I could tell, the original idea was devised by CubeApril when she posted this absolutely devilish screenshot of the deck in action (it wasn’t her first post on the deck, but the first I saw and what gravitated me towards the deck.) 6 Town-razer Tyrant triggers!? Now this is a deck I can get behind.

To start this deck off, we have plenty of one mana options. Our first 4 of is one of the interactive pieces of the deck with Portable Hole. This is more of a metagame choice than anything, but I think Portable Hole just hits a lot of cards right now. From Auras, Food decks, and even bigger offerings like Control and Phoenix, it’s very rare you can’t hit something from somewhere. At absolute worst, it can hit tokens made off of Skyclave Apparition if you’re looking to blink that! Speaking of blinking, our next one drops are all our blink enablers with Ephemerate and Cloudshift. Ephemerate is absolutely obscene as for one mana you get to blink something twice giving you insane value out of some of your cards. That’s how Town-razer can hit 6 lands, Mulldrifter draw 6 cards, Wandering Mind find 3 spells, and so on. Cloudshift is here too as a 1 of as it’s pretty much just strictly worse Ephemerate, but it still does the job well enough.

For our 2 drops, we only have a couple of cards. First is Charming Prince as our secondary way to blink our creatures. It’s decent as it can have a lot of utility, but it’s obviously much weaker than the one mana instants. Second, since we’re in Izzet colors, we just get to play Expressive Iteration! Our curve is a bit high, but we have enough lands and cheap spells to make this a worthwhile inclusion.

Next we get to the crux of the curve: the three drops. First we have our only four of with Wandering Mind. Unsurprisingly, this deck is really looking to cast some Ephemerate so having a creature that digs deep for them is pretty valuable. Even if you aren’t hitting Ephemerate, you can hit removal, or even card draw, making this a multi-faceted tool. Next we have a couple of Seasoned Pyromancer to help us further filter the hand as well as digging us closer to our engine pieces. Finally, we have our two removal creatures with Skyclave Apparition and Deputy of Detention. Both are there to lock down some annoying threats, but we’d rarely blink Deputy of Detention where we’d be happy to blink Skyclave Apparition.

Then we get to the top end of the deck. Town-razer Tyrant loops is what drew me to this deck in the first place. Not only is it a great standalone threat, it is absolutely brutal in conjunction with blink effects making it the perfect card for the deck. Then we play a 2 of Showdown of the Skalds as it’s another card that can dig us pretty deep and let us see a lot of cards, the perfect remedy for running out of cards in the late game. Lastly, we have one of the OG blink targets with Lorwyn’s Mulldrifter. Mulldrifter is as elegant as it gets, Divination on entry is great and blinking it can just get you gross levels of value that we crave playing a deck like this.

Overall, this deck is hilariously fun, surprisingly competitive, and so different from anything else you can be playing in Historic right now.

I’ve seen Thraben in some Blink decks as it is a small roadblock that produces Clues on entry, but I think we have too much to do with our mana to worry about Thraben.

This may seem weird as a Historic inclusion, but we do have an empty sideboard so it isn’t that crazy. Furthermore we could just play a few copies and blink it a bunch to get a lot of Lessons. Overall it’s still probably too weak, but it’s interesting to think about.

I used to be a fiend for blinking this with Restoration Angel in Modern, but I think Seasoned Pyromancer does that job a bit better.

Spellbinder is definitely a fun Ephemerate hit and definitely could be an inclusion in certain top end heavy metagames.

If we didn’t have Town-razer, this could find anything else in the deck so it’s pretty close to be worth considering.

Although repeatable blinking is pretty nice, this is a very slow way of doing it. Pass.

In a similar vein to Militia Bugler, you probably could change up the deck to make this a viable inclusion, but losing Town-razer and Mulldrifter would be pretty sad.

I was pretty surprised to not see Restoration Angel in the deck as it seemed like the perfect inclusion, but I can moreso get it now after playing with the deck a bit more. The blinking is the fun aspect of the deck, but we’re not insanely reliant on it as you may think. The deck accrues value mostly through filtering, disruption, then overwhelming with an Ephemerate, and while Resto is good, it is a pretty clunky means of blinking one of your good ETBs. Now I’m not saying it’s bad, but its likely unnecessary.

Really nifty anti-wrath tech, but definitely more of a Bo3 card if it’s even good enough.

This may seem too cute, but it does make 2 fliers which is a pretty good rate. Still too weak, but better than it looks.

It may seem super weird that Soulherder isn’t in this deck, and I admit it is, but as you play the deck it makes a bit more sense. I see Soulherder a bit as a win more card in a deck like this. For the most part, most of the ETBs aren’t broken, they’re just trying to assemble a strong enough front to win. Soulherder is more like a sledgehammer, you beat the opponent with value as long as it doesn’t get interrupted. With that, Soulherder needs to go uninterrupted to really have an impact on the game. If you get a Town-razer Tyrant or Mulldrifter underneath then obviously it’s going to feel busted, but if you get to just goldfish without the opponent stopping you, you’re likely winning anyway. Don’t get me wrong, try Soulherder if you want to in this deck and it’ll probably still be good, but I don’t necessarily think you need it in every Blink deck either.

Cloudblazer does somewhat seem like a better Mulldrifter, but not being able to evoke Cloudblazer is a big difference.

This could hypothetically be a Yorion deck or we can even just play some Yorion in the main deck, but I think it’s a similar arguement to Soulherder. That said, I would be open to making this 80 cards to companion Yoroin, that would probably be pretty reasonable.