This is the most unique you will have played in Explorer. It’s a Storm-esque deck that can win out of nowhere. It’s a full-on combo deck that punishes decks with a lot of removal and those that are slow and non-interactive. Let’s dive deep into how the deck works and individual card choices. 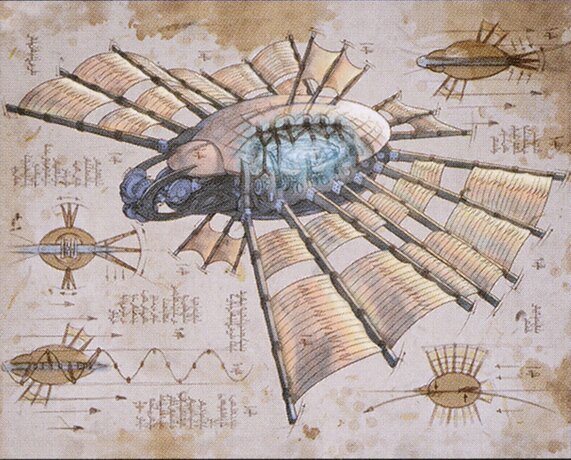 Let’s start off with how the deck functions and wins.

Once you resolve Song of Creation, each spell draws you two cards. That’s why the deck plays 12 copies of 0-drops. You hope to chain enough zeros to draw as many cards as you want. At which point, you cast Thassa's Oracle for the win. Clearly, if you don’t have any mana, you won’t be able to cast the Oracle for the win. However, when you play Song, you get an additional land drop. From this point, once you cast a non-creature zero, you counter it with An Offer You Can't Refuse so that you get 2 Treasure tokens. When you continue going off, you can counter another spell you play and hence get more Treasures. Bear in mind that you only generate additional mana if you counter a 0- or a 1-drop.

This deck can technically win on turn two. Turn one you can play a 0 and counter it with Offer, netting two Treasures. On turn two, you play your second land, sac both treasures and play Song of Creation. Profit.

Turn three is much easier as more roads can lead to it. The aforementioned line works, turn two Kinnan, Bonder Prodigy or Emry, Lurker of the Loch with Mox Amber do the job, and Deadly Dispute on one of your permanents.

Last but not least, Song makes you discard your hand at the end of turn thus disincentivizing you to just play it and pass the turn. However, if your opponent is a deck that’s good at the stack and/or discarding, you might want to slip it into play and then just try to top-deck the win. There have been multiple games when I slammed Song and won 1-3 turns later.

This construction can both win super early and farm wins against unsuspecting opponents or play a longer game. 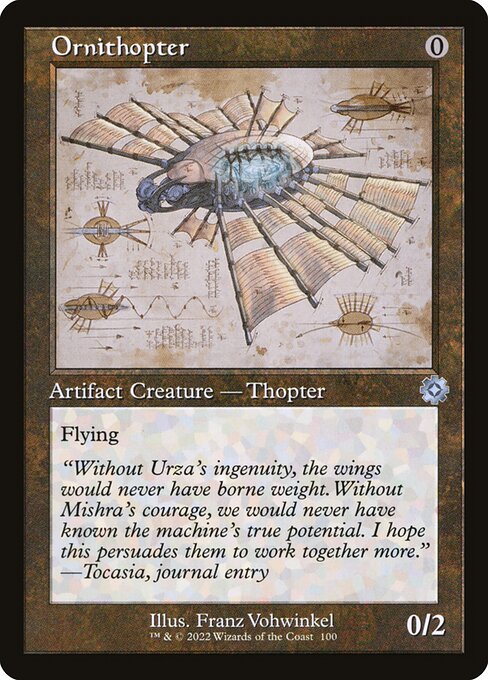 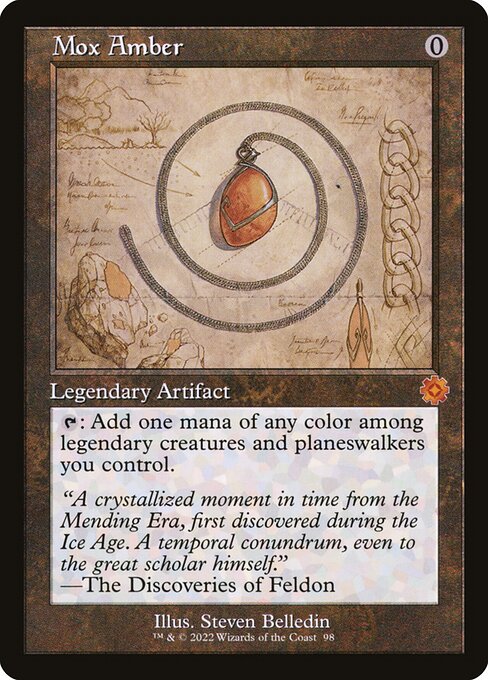 Out of those three, Mox Amber is the only one that’s actually useful as a spell. It costs 0 and provides that much-needed mana under the condition that you control a Legendary creature. Most of the time, I sand bag all the 0s in my hand for the turn I go off. Sometimes, though, you will need to actually use them. Tormod's Crypt can snipe Parhelion II or Kroxa, Titan of Death's Hunger and Ornithopter can block a few attacks. 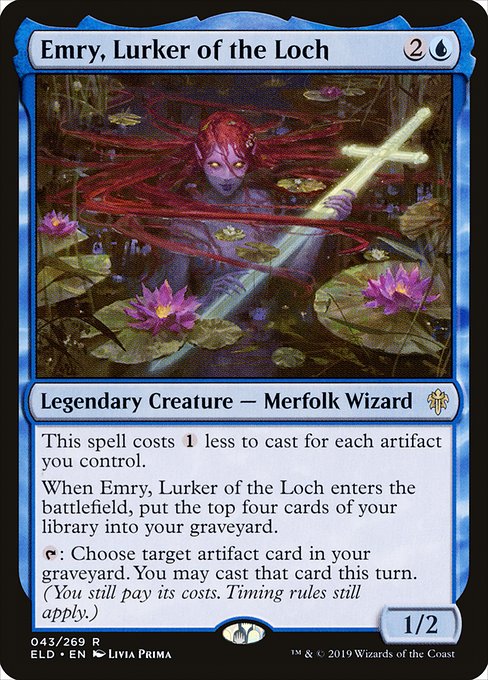 The deck still utilises a few creatures to bolster its otherwise spell-heavy plan. Emry, Lurker of the Loch guarantees a spell for the combo turn thanks to its ability. If left unchecked, it can proliferate our battlefield with other useful artifacts and set-up long-term for a guaranteed win. Thanks to it, it’s usually going to be a must-answer. It’s particularly powerful against graveyard decks where it can keep recasting Tormod's Crypt. It also enables Mox Amber which can be important.

Our best mana generator is Kinnan, Bonder Prodigy. While it enables Mox Amber and make it generate two mana, the real power lies in Treasures we generate. Kinnan makes all the Treasures produce two mana. In addition, turn two Kinnan with with Mox Amber can help you either play Song of Creation ahead of schedule or set up better e.g. by deploying the aforementioned Emry.

The actual wincon is Thassa's Oracle. Ideally, you would play a single copy ,but the risk of having it discarded or otherwise got rid of is a bit too high for my taste. However, it’s a dead card until it’s the best card. Still, there have been games where I played one Oracle turn two in order to block for a bit and get some card selection. 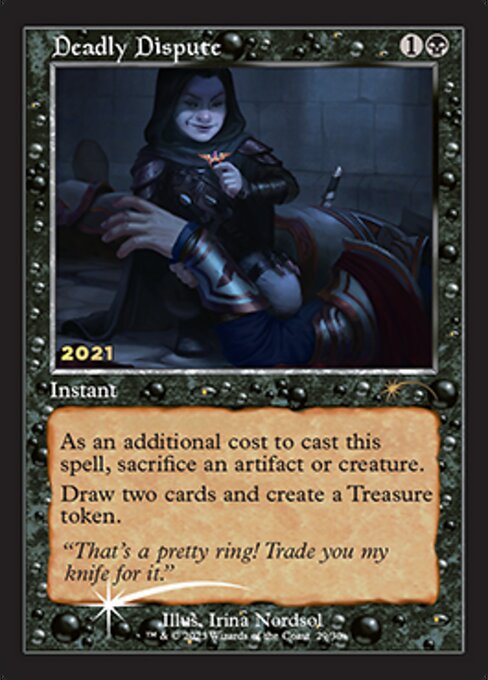 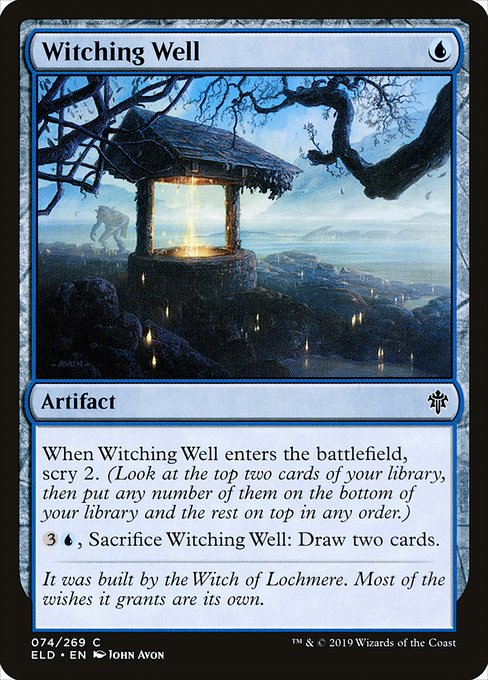 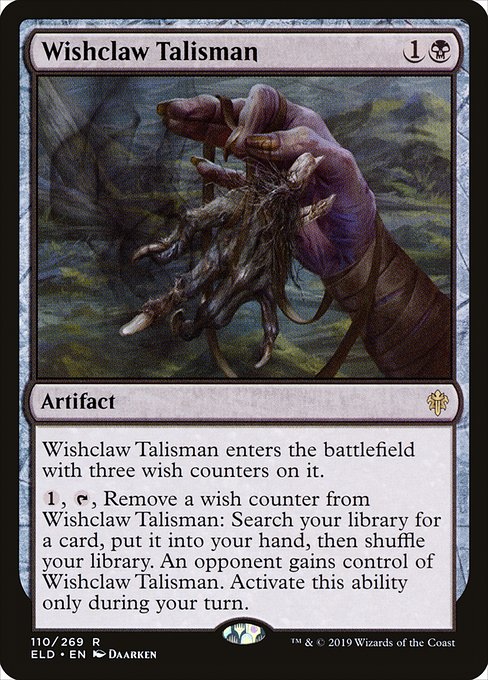 This section is not any less important than the rest of the deck. Deadly Dispute and Wishclaw Talisman require black as the only cards in the deck that’s otherwise Simic splash red, but I think it’s warranted.

Frequently, we won’t have drawn Song of Creation often enough and we don’t want to mulligan into dirt to try to find it. This is where Wishclaw Talisman comes in as a tutor. It’s excellent game 1 as you can easily pass Talisman to the opponent as they won’t find any good effect against us. For me, Talisman usually finds Song, a zero, or An Offer You Can't Refuse and usually the turn before I intend to go off. That’s mainly because on the turn you go off you don’t have a lot of left-over mana, unless it’s turn 5+.

Witching Well is super powerful. It’s usually your turn one play to smooth out the draws and enable Spire of Industry. What’s key and might be missed is its activated ability. When you’re playing a grindy game or you don’t have Song and have to pass the turn, drawing two end of turn is going to pull you ahead nicely and dig further. It also contributes to devotion for Blue if it’s borderline.

Another way for the deck to fix mana, ramp, and draw is Deadly Dispute and it does it all. What I usually do is turn one Witching Well, turn two Dispute sacrificing Well, turn three Song. It’s also useful mid-combo as it effectively costs one, albeit you don’t really want to counter it with Offer. From time to time, you’ll use it to respond to the opposing removal spell on your Emry or Kinnan.

I shall preface this section by saying that it’s a very consistent yet tight deck so there is not much wiggle room. My rule of thumb here is – less is more. Each card I put in the board is there for a specific matchup.

In this match-up I side in Jace, Wielder of Mysteries as additional win-con if my opponent casts a Slaughter Games effect. In addition, it’s a card advantage engine. I expect some number of artifact removal so I trim on Wishclaw Talisman and don’t bring in The Reality Chip. They will try to play as much discard as possible so we need to setup by playing our land drops and at some point either top deck Song of Creation or find it with the remaining Wishclaw Talisman. Witching Well drawing two cards and Deadly Dispute in response to their removal are going to play a huge role.

Countermagic might be tough to get through. I highly suggest making them tap out by end step casting Deadly Dispute and setting up Song of Creation and An Offer You Can't Refuse as a counterspell. In some games, you will have to play double Offer to push the Song through. You can alternatively try to exhaust them off resources with powerful spells like Emry, Lurker of the Loch, Jace, Wielder of Mysteries, The Reality Chip, Malevolent Hermit, Wishclaw Talisman, etc. Our worst nightmare is Narset, Parter of Veils. If you see it, side in Brazen Borrower.

The only task is to stay alive. I cut Emry as it needs to survive an entire turn cycle and will most likely die. I side in some big toughness creatures to roadblock them and, hopefully, slow down by a turn or two. Wall of Runes still has utility in its Scry 1.

They won’t be really able to interact with us so you can choose the best moment to combo off. There is one card I can think of that’s good and it’s Roiling Vortex. If you see it, side in Brazen Borrower.

With four Tormod's Crypt and two Soul-Guide Lantern I am not afraid of the matchup. If we can slow them down by a few turns, it should be more than enough. I’d expect discard to be their strongest piece of interaction. If they focus on their own plan, we can pretty safely set up turn three or turn four kills. Emry, Lurker of the Loch will be their nightmare – sometimes they keep a bit of removal for that reason.

This match-up will be tough as they have early pressure and a lot of countermagic, including cheap spells like Spell Pierce. Holding the battlefield down with Bamboo Grove Archer will be a key piece of the puzzle. It’s a tough match-up still. You might want to leverage some other spells to entice their countermagic and play your lands to play around soft permission.