As a Magic player, I really enjoy looking into strategies that either attack from a completely different angle or incorporate those different angles into regular decks. Such an approach changes the texture of games as your opponent has to adjust to your multi-faceted strategy.

Mill has historically been one of those decks that is either a full-on combo or is intertwined with some controlly elements. In Historic, I have found that a tempo approach works best. You can pair the mill elements with creatures and a lot of interaction. The biggest upside to playing mill is that the vast majority of conventional strategies have no way of defending themselves – mill does not care about combat, blockers, life total, card advantage and cannot be interacted with via removal. It’s a great choice if you like putting your opponents into a tight squeeze. On top of that, it punishes other decks that try to attack the meta such as Nine Lives. 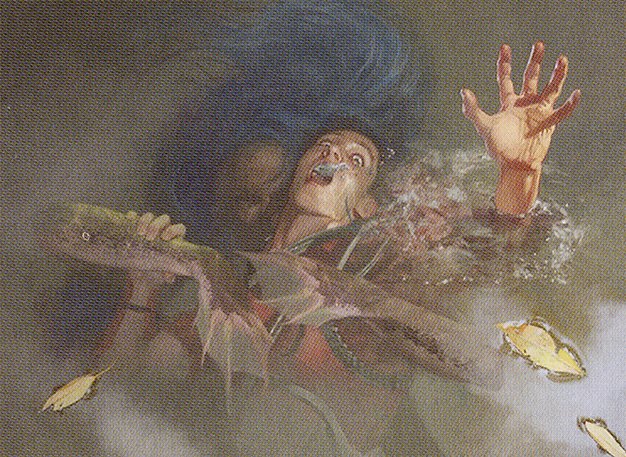 The creatures in the deck are absolutely essential so let’s delve into them first. Arguably the strongest card in the deck. It’s the mill counterpart to Goblin Guide which, if unchecked, swings games on its own. It requires a removal spell immediately – otherwise it can mill 3-12 cards on its own. Draws that involve multiple Crabs feel unfair. Fabled Passage works particularly well with them as you get two triggers off of a single land. If you are playing against a deck with a ton of removal, you may consider holding it off and playing on turn two in order to follow it up with a land drop right after so that you can some value out of it. I have tried a non-Rogue version which is heavy on spells and the only creature is Ruin Crab. However, after multiple matches, I found that the deck was a tad lackluster. First, it didn’t have a good way to block creatures which meant you had to overload on removal which could be a hit or miss depending on the matchup. Second, your Lurrus of the Dream-Den got much worse without multiple targets to recur. Most importantly though, the lack of creatures meant you were a very single-dimensional strategy that had to race with mill every game. In such cases, you would often fall short as you are typically slower than other linear strategies.

Adding Rogues allowed to diversify your threats, force the opponent to keep removal in, and sometimes put such pressure on their life total that you threatened to win both on the mill and damage axes.

Thieves' Guild Enforcer is a very powerful card. You can look at it as more Fatal Push as it will have Deathtouch most of the time and you can flash it in in combat to eat any creature that’s attacking. It attacking for 3 damage is also no joke for a one-mana threat. Last but not least, multiple Enforcers provide a great clock, powerful defensive structure, and a fast mill clock. Soaring Thought-Thief is the worse of the two Rogues, but still does the job. I have had many games where people just don’t expect a 1/3 flash blocker and you eat a one- or two-drop in combat. As both Enforcer and Thief have flash, it gives you more depth in how you can navigate the game, making the timing awkward for the opponent. From an empty board, you can flash in two Rogues and have clock seemingly our of nowhere. 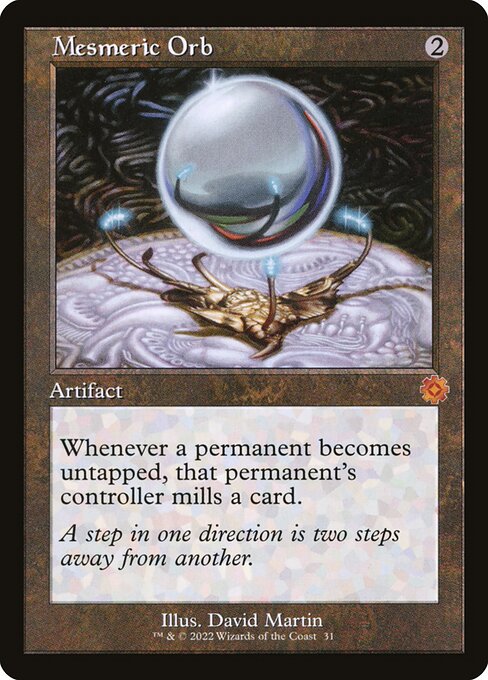 A new addition from retro Brothers’ War artifacts. I like it as a sticky threat that’s tough to interact with. It does add up as, for instance, 5 tapped lands and a few creatures already mill almost 10 in one shot. Against some decks, you will stick it as soon as turn two and it will do its Magic. The longer you stay alive, the more mill you’ll get for your buck. I think the baseline for playability is 10+ cards off one card if it only mills, in which case Orb will meet the expectation frequently. This is probably the most hit-or-miss cards in the deck. I have had games against Affinity or Wizards when Laughter single-handedly got rid of like two thirds of the whole deck. On the flipside, against Dragon Storm, Control decks, random reanimator strategies, it mills maybe 10. To be clear – 10 cards is not terrible, but it’s a tough sell for three mana. However, I really like this card still as Historic now is super efficient and most often than not it’s going to have a huge effect, especially if you play Best Of One, where there are those aggro fast low-curve decks. Against combo strategies, you might just exile their key pieces and win incidentally that way. This is a flex slot. Some decks play full four copies, but I don’t think it does enough – I could see cutting it completely. However, it’s still a nice burst of mill to enable rogues threshold, Into the Story, or just get rid of a fifth of the opp’s deck. 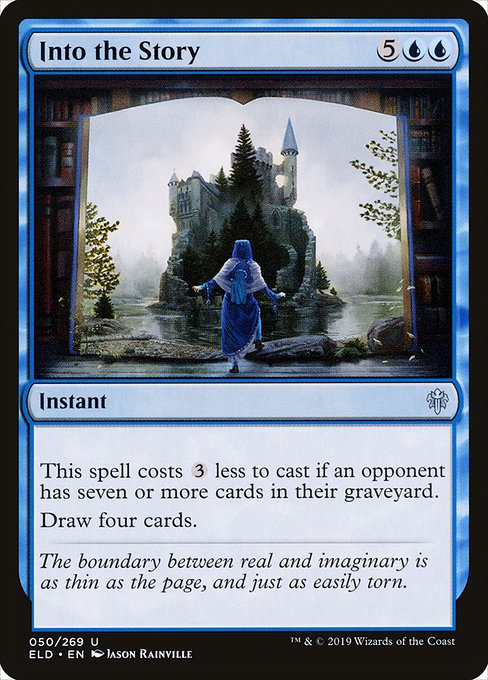 As far as I am concerned, Into the Story is underplayed in Historic. End step drawing four cards is wild card advantage that’s difficult to claw back from, and this deck can easily enable it. While drawing multiples can be clunky at times, I play three. It also gets a tad worse post-board when opponents may bring in Rest in Peace effects. Don’t be surprised when you have to hard cast it for the full retail cost of seven mana. You’d be hard-pressed to play a black interactive deck in Historic and not include four Fatal Push. The best black removal spell that’s excellent early and great late. With four Fabled Passage, we can enable revolt instant speed at our leisure. I found out that I want a fifth Fatal Push. There are multiple candidates for this slot like Bloodchief's Thirst (which I play in the board), Cut Down, Disfigure, but I ultimately landed on Cut Down due to it being an instant and the fact that it will kill the vast majority of one- and two-drops and numerous three-drops. This slot, however, is relatively flex. You can change to a different removal spell, discard spell, a counterspell (I’d try Spell Pierce) or another effect completely. 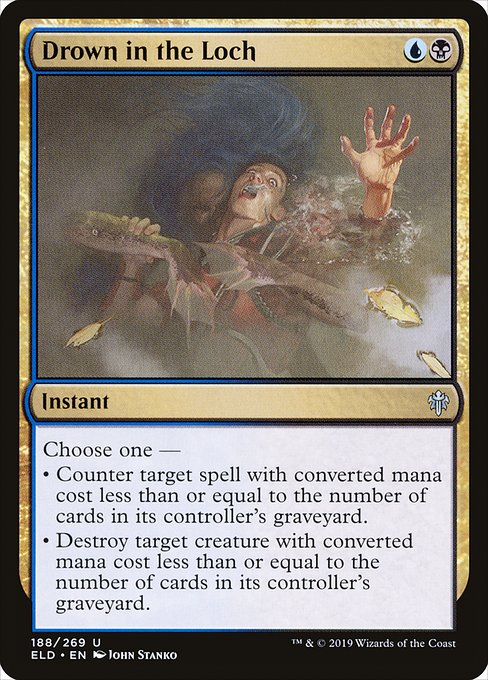 Two-mana split card between Counterspell and Murder. This card gives us the flexibility and power we need to compete against other linear strategies. It does have its shortcomings as it may not be able to kill an early creature if our draw does not line up too well. Still, it’s too good on average to pass up on it. In the midgame, it’s the perfect remedy for whatever is posing a threat to you. Discard spells are almost mandatory when you play black. I chose to go with Inquisition of Kozilek over Thoughtseize main deck as Drown in the Loch will be able to counter whatever the late game thing is and I want to focus on staying alive early and being able to set up the mill engine. I could see them being turned into removal or counterspells like Spell Pierce, but discard is adaptive enough that I think I’d stay with it. Lurrus of the Dream-Den is legal in Historic as the only format in Magic so let’s take advantage of it. Late-game recurring of Rogues and Crabs makes the opponent have to deal with yet another angle of attack. It’s also a 3 power lifelinker that can block profitably with smaller threats.

Against Wizards, we need to assume a more interactive role. I tend not to keep hands without at least one removal spell, preferably more. Mesmeric Orb leaves a lot to be desired as they usually don’t have many permanents and we don’t want to spend out second turn on not affecting the battlefield. Tasha's Hideous Laughter is devastating for them, but try not to get Spell Pierced.

Another excellent Tasha's Hideous Laughter matchup. Our biggest annoyance is Thought Monitor which costs seven mana, but the rest of the deck is super cheap, including all the zero drops played. You can try to delay casting Laughter until you’ve seen multiple Monitors played or milled. They don’t put that much pressure compared to Wizards, but they can interact on the stack.

Deckbuilding-wise, we have the inherent advantage that we don’t care about them gaining infinite life. Unfortunately, you will have to make the opponent click through their thing as you can still win. The main thing is to remove their two-drop creatures that grow and put real pressure. Thieves' Guild Enforcer will easily trade in combat. Don’t allow Voice of the Blessed gain indestructible as you will be in trouble if you do.

We have a very focused plan – not die. They won’t have any on-stack interaction and are very linear. Our Tasha's Hideous Laughter will exile 20+ cards most likely, which is obviously huge. Play control and the mill win con will come in time. Lurrus of the Dream-Den will come up often as well because of the Lifelnik. Trade aggressively in combat if you can to leverage Lurrus as hard as you can.

In this matchup we drop the control plan in lieu of a tempo-oriented strategy. We play instant speed, deploy threats instant speed, put pressure on their life total. They will be put into a real squeeze having to play around creatures, mill, discard, and countermagic. A well-timed Spell Pierce on their planeswalker may completely swing the tides on the game.