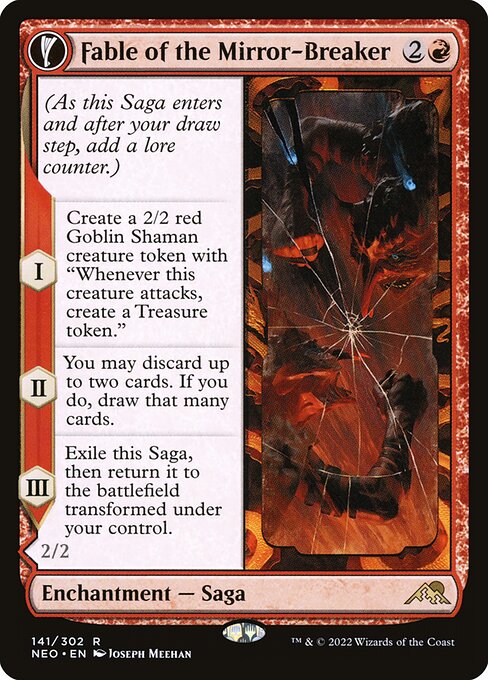 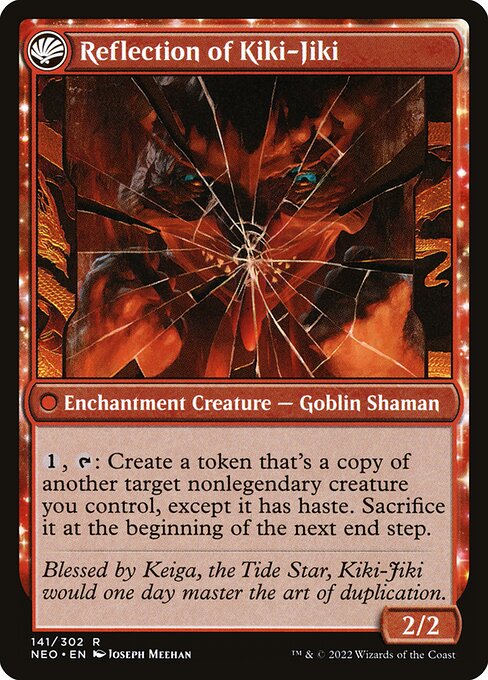 Philip Mahr has been a 20 year old competitive Magic player for 3 years, with many top finishes in online events on MTG Melee and finished 26th on the Leaderboard for the season 2 of the Arena Championship, and also played in the US Regional Championship in Atlanta.

With the power level of Standard right now being so high, it is ok to trade multiple removal spells with Fable of the Mirror-Breaker because other cards in your deck can make up for the card disadvantage – whether that is your own Fable of the Mirror-Breaker, blood tokens, Wedding Announcement draws, or even the channel lands. Recognizing this is key to playing Standard in 2022.

You may make the argument that this opens up the possibility for your opponent to counter the removal spell targeting the token, but I think that play crosses the line of overvaluing the token. I don’t make this play frequently myself, even if I have the Make Disappear, because you can find much better targets in standard like Sheoldred, the Apocalypse or using it to protect your Reflection of Kiki-Jiki down the line.

With this being said, it is still important during deckbuilding to choose creatures that block favorably versus 2/2 goblin shaman tokens. This is one of the major reasons for the amount of Dennick, Pious Apprentice and Ludevic, Necrogenius we saw in Esper lists at the world championship.

The most feel good sequence in Standard is Make Disappear your Fable of the Mirror-Breaker, untap, jam your own Fable of the Mirror-Breaker. The power of this play should warp how you use counterspells against opponents. As someone who grew up Mana Leaking anything you could get your hands on, in modern Standard, this is a style you have to avoid. Don’t always counter their two drops if you have removal in your hand and no play to make on your next turn. The deadliness of Fable of the Mirror-Breaker resolving on turn three should be in the minds of both players. This is the biggest distinction you will see between playing on the ladder and watching high level competitive players. I learned this lesson mostly from playing Jeskai Hinata, but I think it is still relevant in today’s Standard.

The best way to put Fable of the Mirror-Breaker players in a bind is to play as if they always have it, especially if you have Make Disappear, , or Spell Pierce in hand. This means you will delay your turn two Reckoner Bankbuster until turn 4 or you decide not to play your two drop creature on three. The most common mistake I see players making right now is playing Reckoner Bankbuster on turn two then getting Fabled and not being able to ever use the long term advantage Reckoner Bankbuster gives you (of course this lesson doesn’t apply to decks where you don’t play counterspells like Mono White Midrange).

Getting the most out of your Fable of the Mirror-Breaker

Now that I mentioned all the ways to play against the card, I figured I should mention how to get the most value out of your own Fables. The first lesson is to always start your turn by attacking. This will put pressure on your opponent to think about if they want to let the token attack, and keeping this pattern consistent is important so you don’t give up information about your hand. When I have a favorable attack where the shaman is trading or free to get in, I immediately go to combat without playing a land because the opponent may remove the token more often if they think you are stuck on mana sources.

The second lesson is just to think longer on the second chapter. Just taking an extra moment to pitch the correct lands or figure out what your plays are for this turn and next turn will lead to better discards. I think that players get stuck into the mindset that they have to discard 2 cards or they have to discard all their lands. I rarely discard spells with Fable of the Mirror-Breaker and I often only discard one land if I feel the game will go long and I want to make my land drops.

The last lesson is to utilize the lightning rod of the Reflection of Kiki-Jiki. We have reached a point where most players won’t let you untap with a flipped Fable of the Mirror-Breaker. This is an exploitable fact where you can really put your opponent in a bind by playing something like Sheoldred, the Apocalypse, where even if they can remove both threats, they can’t do it all in one turn. The other aspect to be mindful of is sweepers – often I won’t play my Bloodtithe Harvester if I suspect my opponent could have Farewell or Brotherhood's End. That way, if they let you untap with the flipped Fable of the Mirror-Breaker, you can still play Bloodtithe and make a copy, but also you aren’t as punished if they do have the wrath.

In all, Fable of the Mirror-Breaker is a fantastic card and it will continue to be one the best, if not the best card in Standard. That is why it is key to understand how to properly play with and against it to have success in the format. Hopefully you found this article helpful for Standard play now and something to think about with the Standard Regional Championships on the horizon.

Pioneer Deck Difficulty Ratings: Which Pioneer Decks Are the Hardest to Play?