Hello everyone! Thus far we’ve covered a lot of sweet cards. We have Elspeth Resplendent, Ob Nixilis, the Adversary, Luxior, Giada’s Gift, Vivien on the Hunt, and Shadow of Mortality, Lord Xander, the Collector, Shakedown Heavy, and Extraction Specialist! However, rather than doing an individual card evaluation, let’s talk about a cycle!

With Streets of New Capenna, an old mechanic called Hideaway has come back and there are 5 Rare Enchantments with it! Will this mechanic be able to break into Standard or will it be relegated to the dollar bin at your LGS? Let’s find out! Before I dissect the individual cards, let’s talk about Hideaway quickly. How Hideaway works is that it’s an ETB ability that lets you look at the top X cards (in this case, they’re all 5) and exile one of them face down underneath the Hideaway permanent. Once you fulfill the card’s particular requirement, you get to cast the card for free at the time of the requirement being met. Even if it’s a card you couldn’t normally cast during a particular phase (like a sorcery during combat), Hideaway ignores that and lets you cast it anyway.

Obviously, casting cards for free is extremely powerful and being able to look 5 cards deep is quite substantial so the big part of evaluating these cards is what other advantage they provide and how easy it is to fulfill the cards requirement. So to avoid repetition, I won’t recap that it each enchantment has Hideaway 5. With that, let’s get into it.

To kick us off, we have the White enchantment Rabble Rousing. Rousing is 5 mana and with each creature you attack with, you get an additional 1/1 Human attacking with you. Then once you have ten or more creatures, you get to trigger the Hideaway ability. Immediately, this gives me Adeline, Resplendent Cathar vibes as it turns each creature you have into a mini version of it!

This card will probably feel amazing if you’re significantly ahead, have a lot of Anthems, or can trigger the Hideaway, but I feel you could do a lot better for 5 mana. Maybe this has some utility in a tokens build, but I have my doubts.

For our second Enchantment, we have another 5 drop with Wiretapping! This card is pretty simple as the first time you would draw a card, you draw a second one. Then if you manage to get nine or more cards in hand, you get to trigger the Hideaway part of Wiretapping.

Historically speaking, Phyrexian Arena effects are quite powerful, especially is Standard slows down. My contention with Wiretapping specifically though, as you may expect, is the mana cost. Five mana is a lot of mana to spend on a Phyrexian Arena effect as, although this is much stronger, these effects tend to be a lot cheaper. However, Phyrexian Arena doesn’t have Hideaway so how does this stack up?

Once again, I’m not seeing it. Five mana is too much for this type of effect normally and then getting NINE cards in hand will be a huge chore. If you manage to have nine cards in hand, odds are you’re winning anyway so I feel the Hideaway portion of this card is hardly important then. To me, this screams win more and is not powerful enough to justify inclusion in your decks. Maybe this could be good in Control mirrors, but tapping out for this at 5 mana seems like a recipe for disaster.

Now that we’re through with the expensive enchantments, we get some cheaper ones! Tampering is another simple design, mill 3 cards every upkeep and trigger Hideaway when you hit 20 or more cards in graveyard. Generally speaking, repeatable self mill is hard to come by and getting 3 cards out of the deal every turn for only the initial investment is a reasonable rate. While this is a bit expensive for this effect, if you’re a deck that needs to fill the graveyard fast, this is a reasonable option.

That said, at least in Standard, I don’t see a deck that would need to fill the graveyard to this extent so that would likely limit what decks would look to play this card. Furthermore, not triggering until your upkeep means the first turn the card doesn’t do anything which is also pretty killer for a 3 drop. While I think this is more playable than the previous two cards, this likely still isn’t great overall. However, if a deck needs a large amount of cards in graveyard, this could be a reasonable option. Out of all the Hideaway Enchantments, this is the only one with a weirder design! So we have a 3 mana Enchantment that every time you cast a multicolor spell you create a Treasure, them if you have WUBRG to pay, you can cast the hidden card. Initially when I read this design, I thought it was really bad. This is the only one that requires an additional mana investment to cast the Hideaway card after the fact when that’s the best part of the card, how can that be good?

Over poring it over more, I realized that maybe I was viewing the card incorrectly. Rather than evaluating it on the merits of Hideaway, I should focus more on the ability. In a way, this card is similar to Bard Class where it reduces the cost of certain types of spells, but rather than something as restrictive as legendary creatures, it’s just a multicolor spell. Then, if you have a lot of excess mana, you get to get a free spell on top of it. While this needs a very specific deck to be good in, I think this may actually be a lot better than it initially appears. You need to play a lot of multicolor cards obviously and ideally you’d be 5 color, but that seems somewhat feasible. So beyond this, is there any reason to be 5 color? Yes, and it’s name is The Kami War. 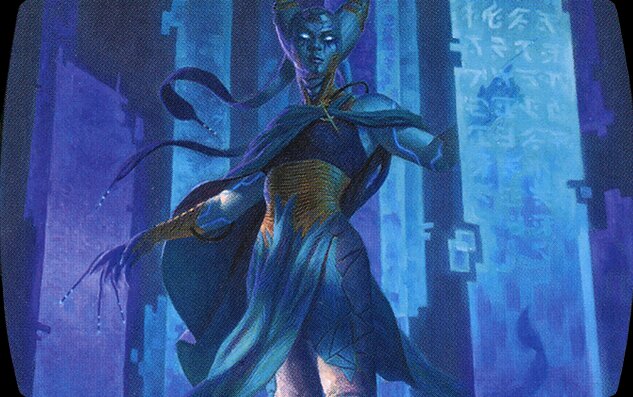 Is this deck any good? No clue. Will I try it? Absolutely. It’s styled after 5 Color Niv in Historic and that deck is surprisingly strong so maybe this is reasonable! Nevertheless, this card will require a hefty cost to build around but could be very powerful in the right builds.

For the final enchantment of the article, we have Fight Rigging! Once again we have a 3 mana enchantment with a super elegant design, at the beginning of combat, put a +1/+1 counter on a creature then if you have a creature with power 7 or more, you get a free spell. So with an easy comparison, where Rabble Rousing is Adeline, Resplendent Cathar, Fight Rigging is Luminarch Aspirant. That said, while Rousing was way too expensive for it’s effect, Fight Rigging is only one more mana than one of the best White cards printed in recent years, is much harder to kill, and can get a free spell on top of it!

Let’s be honest, 3 mana versus 2 mana is still quite a large gap, but considering Mono Green has naturally large creatures, getting one to 7 power doesn’t seem that unreasonable. While I don’t think this is going to substantially improve the deck, this does seem strong enough to warrant play whether it’s in the main deck or sideboard. For Mono Green specifically, this also combos extremely well with Unnatural Growth. Unlike something like Wiretapping, I don’t see this as a win more as you can definitely get a creature with 7 or more power and not be winning yet, but getting a free spell on top of that could definitely get you there.

Overall, I don’t think most of these enchantments are going to be particularly powerful, but at least the 3 mana ones do have some real potential.