Hello everyone! So far, we’ve already highlighted a bunch of sweet cards with Elspeth Resplendent, Ob Nixilis, the Adversary, Luxior, Giada’s Gift, Vivien on the Hunt, and Shadow of Mortality, and Lord Xander, the Collector! While this is a great collection of some of the set’s hallmark cards, with such a star studded cast, it’s easy to miss some of the less inherently impressive cards.

While all these cool cards were spoiled, a particular card caught my eye as I thought it would have cool implications in aggro decks, but after poring over it more, I realized that it may be significantly better than it looks. What card could it be? Well if you read the title, you know that it has to be Shakedown Heavy! So let’s evaluate this beefy beater. We have a 3 mana 6/4 with Menace, and if that’s all the card did, it would obviously be insane. However, Black has a history of overstatted beaters that have significant drawbacks so this design isn’t exactly new. Let’s take a look at a few more historical examples. 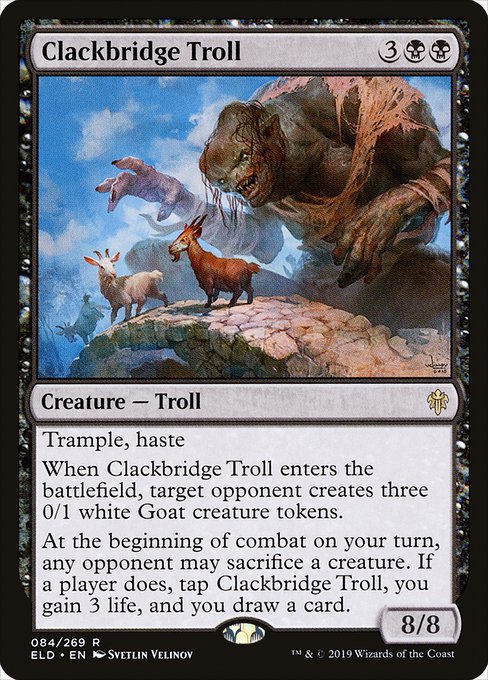 I’m sure there are more that I’m not thinking of, but these are the 4 that come to mind. All of these cards, like I said, are large beaters at a cheap cost with evasion, but all have substantial drawbacks. The flashiest of all of them had to be Abyssal Persecutor which “killed” quickly, but actually prevented you from winning the game! Despite how fast of a clock it had, it never really saw competitive play.

Desecrated Demon was also a 4 mana 6/6 Flying, but rather than having a huge drawback, players could delay it from attacking or blocking by sacrificing a creature to tap it and put a counter on it. This saw widespread play in Mono Black Devotion back in Theros Standard, but never made much of a splash beyond it.

On rate, Master of the Feast was definitely the best of the bunch, but by giving the opponent a card on your upkeep, you had to kill with this extremely quickly to not lose immense value. As a consequence of it’s design, Master never saw any play.

Finally we have a recent example with Bloodvial Purveyor. This is most reminiscent of Desecrated Demon as it’s a large flier, but instead of letting the opponent delay the attack, Purveyor supplies them with Blood tokens that can buff it on attack! Despite this seeming like a promising new take on Desecrated Demon, Purveyor has seen functionally zero play.

So while all these cards were strong on it’s face, only Desecrated Demon ever got real play as it’s drawback, while painful, didn’t tangibly give the opponent anything (unless you count sacrificing Voice of Resurgence to it to get a huge token). So why bring this up? It’s because Shakedown Heavy is by far the best of the bunch.

A 3 mana 6/4 is obviously huge, and with Menace, blocking this thing becomes a huge chore. The only card (beyond removal) that can deal with this as an attacker profitably is Esika's Chariot as you can double block with Cats and keep the Chariot, but removal can obviously help clear the way.

However, we have to remember Heavy’s drawback. Whenever it attacks, if the opponent wants, they can untap Heavy, remove it from combat, and let you draw a card. While all the other historical examples had a pretty substantial drawback, Shakedown Heavy may be the first one without one. Yes, obviously you want to tussle with your huge 6/4, but if you get to draw even a single card off of it, it replaced itself.

Furthermore, it isn’t just removed from combat, it gets untapped. So against creature decks that can’t afford to take the damage, they’re forced to untap it so it can block and you got an additional card out of the exchange. Against slower decks, obviously they don’t want to take 6 damage so letting you draw a card is better, but they can only allow that so many times as well!

This card is half huge beater/half Phyrexian Arena, it’s cheap, and it’s easy to cast. Considering it’s so cheap, there are only a few cards that remove this at a mana advantage as well which makes it even harder to not get value from. What else do you need?

Since this card is so versatile, I can envision it seeing play in a host of different strategies. Mono Black Aggro? Why not, it’s a huge beater or repeatable card advantage at worst. Midrange deck? You like drawing cards or providing heavy pressure. Control decks in boarded games? The aggro decks definitely boarded out their removal and need to contend with this huge body. While I think these are all viable options, I think a deck that likes having both halves of the card at every stage of the game will make the best use of it.

By going Jund Midrange, you have great interactive, aggressive, and midrange options all wrapped into a neat package. Shakedown Heavy is so potent here as it’s great on offense, defense, when it’s drawing cards, when it’s copied by Reflection of Kiki-Jiki, crewing Esika's Chariot, and anything else you could need from a three drop!

Between it’s stats, marginal to non-existent downside, and it’s overall versatility, I think Shakedown Heavy is going to be one of the best cards in the set. While it doesn’t provide any ETB value like many of the best 3 drops in Standard, I believe it’s power can make up for it.