Hello everyone! Today I’ll be going over Rakdos Sacrifice in Dominaria United Standard. Standard has been dominated by Red and Black cards of late: Fable of the Mirror-Breaker, Liliana of the Veil, and Sheoldred, the Apocalypse are all incredibly strong cards that have shaped the metagame and led to the dominance of Black-based midrange decks trying to stuff all the best cards into their 75.

While this Black-Red deck isn’t entirely different – it is running a play set of Fable of the Mirror-Breaker and two Sheoldred, the Apocalypse, but this deck has something that the other midrange decks have chosen to eschew: Synergy.

This decklist is inspired by Shlop, who took to a 7-0 finish in the Standard Metagame Challenge.

Rakdos Sacrifice
by Omrithopter
Buy on TCGplayer $515.58
Standard
best of 3 This is a variant of the Rakdos Sacrifice archetype that focuses on sacrificing creatures for value: Ob Nixilis, the Adversary, Braids, Arisen Nightmare, and Henrika Domnathi are this deck’s main payoffs, and are all very strong cards, Braids in particular.

Braids is the newest addition to the sacrifice archetype, and has been performing excellently thus far. This deck can pump out cheap creatures, artifact tokens, and even planeswalkers faster and more easily than your opponent, and you’ll soon force them to let you start drawing cards. In terms of fodder for sacrificing, Unlucky Witness is the strongest; sacrificing it to Braids on your end step means you have your next turn cycle to cast the cards off it, but if you sacrifice it to Henrika or Mob Nixilis you’ll have to play a card from it that turn or you’ll lose them, so make sure to keep up some mana and/or a land drop so that you don’t miss out on value from it.

Bloodtithe Harvester is fine to sacrifice when need be, but what you should be sacrificing is the Blood token that comes with it, to either Braids or Voltage Surge. The two drop that’s particularly good to sacrifice is Riveteers Requisitioner. Having three power means it’s great to casualty to Mob Nix on turn three, if you trade it off turn two you can play out a Jaya, Fiery Negotiator on turn three, and later in the game, you can blitz it out then sacrifice it before it sacrifices itself for that extra bit of value.

Furthermore, a treasure token in the early game can be a significant boost of tempo. Requisitioner is also great for killing unprotected planeswalkers because the haste means it can snipe a Liliana of the Veil or Sorin the Mirthless before your opponent gets to untap with it. Jaya, Fiery Negotiator is the final source of sacrifice fodder for this deck. Jaya is in my opinion underrated – its high loyalty means Jaya rarely dies in combat, and ticking up for a 1/1 the turn it comes down also helps with that. While Jaya may not be strictly better than other options like Sorin the Mirthless, if you have some way to utilize the prowess 1/1s Jaya makes (like sacrifice outlets or cheap spells), Jaya can put in a lot of work. In this deck, which pumps out a bunch of cheap creatures, the -2 usually ends up killing what you need it to.

The one shortcoming of Jaya, Fiery Negotiator is that her ultimate is mostly useless, so there’s not much point trying to threaten it, but luckily the -1 and -2 are great ways to spend excess loyalty so this is rarely a significant downside.

The deck is rounded out with utility and good cards. Fable of the Mirror-Breaker is the best card in Standard, it provides ramp, filtering, and Reflections of Kiki-Jiki puts in a lot of work if you manage to untap with it. Voltage Surge, Infernal Grasp, and Soul Transfer (and Bloodtithe Harvester) are this deck’s removal package. Surge and Grasp are very efficient, but Soul Transfer gets around death triggers and recursion, and you’ll often have an artifact and an enchantment in play for the two-for-one (Fable makes both with just a single card).

Finally, a pair of Sheoldred, the Apocalypse round out this deck. While not particularly synergistic, Sheoldred will end the game if unanswered, and is particularly good against white-based decks which can stall out the board and stabilize, but don’t have many ways to kill Sheoldred. Basically, Sheoldred is just so unreal it’s incorrect to not run at least two in any deck that can cast it. 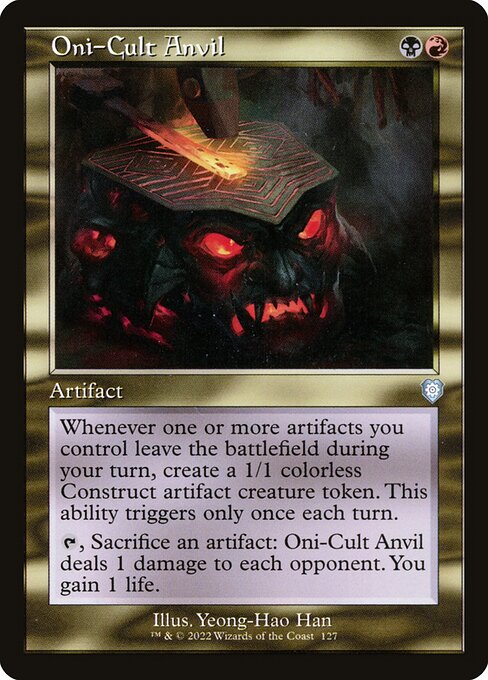 Something I bet a lot of you are wondering right now is why aren’t I running Oni-Cult Anvil? I will freely admit that Anvil is the best card for sacrifice decks printed since Cauldron Familiar + Witch's Oven and Mayhem Devil, and Rakdos Anvil is even one of the top decks in Alchemy right now. However, the reason I think that Oni-Cult Anvil isn’t good in Standard is two-fold.

First, the existence of The Meathook Massacre. While The Meathook Massacre is a great payoff for Anvil decks, it’s also an excellent counter to it. With such a high percentage of the metagame running 2-4 copies of Meathook, not only is pumping out a bunch of 1/1s significantly less impactful, this also makes having Meathook as a payoff for sacrificing creatures to Anvil less reliable, because if the opponent has a Meathook out too, the two Meathooks cancel out.

The second reason is that the enablers and payoffs for Anvil are somewhat lackluster. Experimental Synthesizer is great, but Deadly Dispute is no longer in the format, and Reckoner's Bargain is a significant downgrade. Without having The Meathook Massacre as a reliable payoff, the only good payoff for Anvil is Braids, Arisen Nightmare.

I’m not saying Oni-Cult Anvil is actively bad, it’s still by far not the worst thing to be doing in Standard, but running Anvil means running a whole host of other cards without a lot of raw power. This, combined with the fact that the reasons to be running Anvil are less persuasive after rotation, means I think sacrifice decks can do better by leaning into other synergies over Anvil.

If I haven’t convinced you, and you’re still dead-set on running Anvil, I’d run this list by misplacedginger, which he just top 8ed a recent MTGO Standard Challenge with.

Rakdos Anvil
by Omrithopter
Buy on TCGplayer $476.92
Standard
best of 3 This deck is very similar to the Anvil-less one, except it eschews Jaya, Requisitioner, and Braids, for Anvil, Reckoner Bankbuster, and Experimental Synthesizer, while still running Sheoldred, the Apocalypse, because as I said before, that card is nuts.

In terms of game play, this deck gets its engines going a little faster in the early game, but lacks the pressure that Riveteers Requisitioner and Braids, Arisen Nightmare can create. In the late game it relies on Reckoner Bankbuster and Experimental Synthesizer to ensure it doesn’t run out of cards.

This matchup tends to be slightly favorable because Liliana of the Veil isn’t very good against this deck, and this deck’s synergies mean it can grind well in the late game. The exact sideboarding in this matchup shifts some based on what exact list your opponent is running, but the most important thing in this matchup is making sure a Sheoldred doesn’t stick on the other side of the board, so if you see a lot of Sheoldreds, bring in more removal, and if you don’t, cut a bit.

This matchup is pretty close, but slightly unfavorable. What really matters is casting a good The Meathook Massacre, especially if your opponent has a Wedding Announcement or two. Otherwise, focus on getting chip damage early, and leverage your planeswalkers in the later game. Don’t play into The Wandering Emperor with your important creatures if you don’t need to.

This matchup is the best of the black-based midrange decks because it’s more creature and removal-heavy, and this deck is very resilient to removal and great at dealing with creatures. Your opponent has lots of ways to kill your planeswalkers without combat, such as Riveteers Charm and Unleash the Inferno, so don’t give up too much protecting them (especially Jaya).

Pressuring early is important because once your opponent reanimates and/or hard casts a big creature or two, it’ll be hard to get through. Be careful not to give your opponent a free discard outlet with Ob Nixilis, the Adversary, and look to set up a big The Meathook Massacre on your own creatures as your finisher, it’s one of the best sources of reach for this deck.

Be wary of The Elder Dragon War, but it’s hard to play around it while still putting your opponent under enough pressure. Game one this matchup is hard, but post-board it gets a lot easier.

This matchup is favorable because Oni-Cult Anvil isn’t much of a threat in this matchup, and Sheoldred, the Apocalypse, Henrika Domnathi, and Jaya, Fiery Negotiator are all hard for the opponent to deal with.

Braids isn’t great in this matchup, but since both you and your opponent also has Braids, it evens out.

Ao, the Dawn Sky is the scariest card in this matchp – it’s a fast clock and hard to deal with efficiently, so save your Soul Transfer for it. The Meathook Massacre is great in this matchup, but can be a little tricky to set up sometimes because of Malevolent Hermit and Ao, the Dawn Sky are effective against it.

Sheoldred, the Apocalypse is very risky to play out in this matchup because of Grafted Identity, so watch out for that.

Rakdos Sacrifice is a strong contender in the current Standard Metagame, with virtually no bad matchups and an excellent grindy gameplan.

If you have any questions or comments, feel free to let me know through the MTG Arena Zone Discord, or message me on Twitter. Thank you so much for reading, good luck in your games, and may your The Meathook Massacres be 5-for-1s.