At Worlds XXVIII, we saw three formats – Standard, Explorer, and Limited. The Explorer meta was relatively diverse. We saw a large proportion of Greasefang, Sacrifice, and Spirits, which was to be expected. However, the most interesting deck to be represented in four copies was Temur Transmogrify which we hadn’t seen that much before.

It’s a mix between midrange and combo. It does want to get a quick Titan of Industry online which it can accomplish as soon as turn three, but it doesn’t need to. A fast Titan will dominate most boards as a 7/7 reach trampler and a 4/4 Rhino are to be reckoned with and there are few removal spell that can actually contain it which makes the combo powerful. Against non-interactive decks, this shell gets on the board very fast and kills in two combat steps. However, it also has a deep reactive angle with over a dozen interactive spells main deck.

Let’s see what individual cards do in the deck.

Temur Transmogrify
by Skura
Buy on TCGplayer $696.99
Explorer
best of 3 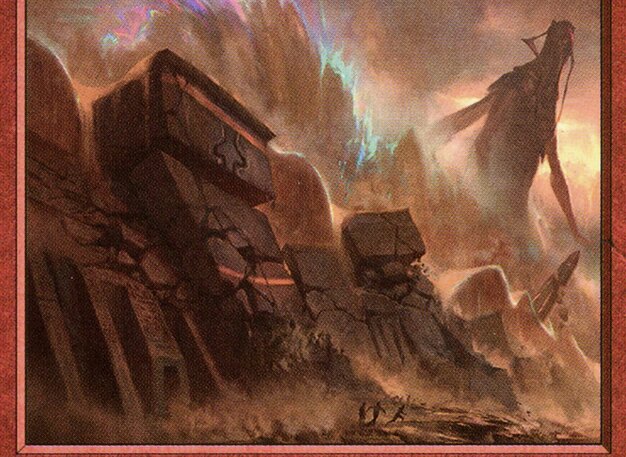 Let’s start off with the main pay-off in the deck.

It’s arguably one of the strongest threats in the entire format. Being a 7/7 makes it nigh-unkillable in the format where you mostly see damage-based spells like Stomp or Play with Fire or cards like Fatal Push. On top of that, it has two relevant keywords – Trample and Reach. They serve two roles. First, trample makes it so that the opponents cannot chump it forever and it actually pushes damage through. Second, reach allows you to stabilise in difficult games. While clearly it roadblocks the board, flying creatures could otherwise be quite annoying to deal with. However, thanks to reach, that’s not the case and you are sure nothing can push through.

In addition to all the goodness you’re getting, there is even more. It’s enter-the-battlefield trigger gives you a choice of two of the four mentioned options: This is the namesake combo piece. In practice, it allows you to exile your own creature token to put the aforementioned Titan of Industry into play. I tend to think of such effects as one-card combos, as in most games, you’re going to just play out the game normally and cast Transmogrify if an opportunity comes up. There isn’t even much of a deck building cost to it. You need a payoff (Titan of Industry) and token makers, but there are so many powerful cards which make tokens, incidentally or otherwise, that you don’t even feel like it’s one of the prerequisites for the deck. The other take on the same effect. Lukka, Coppercoat Outcasts minus two ability does the same thing as Transmogrify. It’s more expensive, so deckbuilding-wise, Transmogrify gets the priority of being played in higher quantity. Everything I said above applies here.

In addition, it’s a planeswalker which stays on the battlefield which works better in longer games. As it starts on five loyalty, you could have games where you use its Transmogrify effect two turns in a row and still keep it alive! Not only does it bring Titan of Industrywhich is a must-answer threat, but it itself is a must-answer threat.

It’s plus one will be largely irrelevant as there are only three creatures in the deck and you don’t want to have to cast them. I also doubt you will ever be able to or want to use the ultimate. However, in those rare games where you run out of Titans, you might want to go up to the ultimate and kill off the opp with it. After all, Shark Typhoon tokens still have power and toughness. The most efficient on-stack answer a deck could play. I adore its inclusion and the fact that as many as three copies are in this list. It allows you to play through opposing countermagic and really mess up opponents’ multispelling. It cleanly answers Fable of the Mirror-Breaker which is hugely important and tempo-positive at that. It punishes opponents tapping out while not tying up too much mana for you.

Another piece of countermagic. Make Disappear can counter creatures which is mainly used to relieve pressure off you to have more time to set up. There might be games where you take advantage of the casualty mechanic, so always double check whether you can and want to use it. Tokens off Shark Typhoon, Fable of the Mirror-Breaker, Esika's Chariot, Rhino Warrior, and Careful Cultivation can all enable it. Moreover, nobody expects two-mana counterspells in Explorer, especially from a non-control deck. I can assure you that you will catch multiple people off guard with this tech.

If you can either Spell Pierce or Make Disappear a spell, make the final choice based on the curve. If the next turn you can deploy the next threat and have only one mana left, Make Disappear now. On top of that, assess which card will have more value if you hold it for later and that will depend on the types of cards they play, mana available, and if you can turn on casualty. Early game removal. In this deck, it’s the best cheap spell as you will find yourself paying the additional cost often enough, at which point it’s an almost broken piece of removal. You can sacrifice Treasure tokens, Courier's Briefcase, and Esika's Chariot. While you can probably think of better options for this slot, its second and third lines of text make it the best inclusion in this shell. Most often, you’ll bottom the worst card in hand to get closer to drawing Transmogrify, bottom a redundant copy of Transmo effect, or bottom Titan of Industryso that it’s in the deck to be later cascaded into. As far as I’m concerned, very infrequently will you opt against putting anything back.

Its presence in the deck justifies playing other fringe effects which you can always bottom, be it Spell Pierce against a creature deck or Voltage Surge against control.

This vehicle does a lot for the deck. It’s an artifact to turn on Voltage Surge, makes tokens to be sacrificed to Make Disappear or Transmogrify, is a mid-game threat, goes wide, copies Rhino tokens – all in one card. It truly bolsters your fair plan and punishes opponents for holding up interaction to break up the combo. The main purpose of Omen of the Sea is card selection. Early in the game, if nothing is happening and you have nothing to interact with, it’s a perfect window to resolve Omen and dig deeper into the deck. You won’t always want to try to find Transmogrify – sometimes you’d rather find an interactive piece to impede the opponent id est against Greasefang. Secretly one of the strongest cards in the deck. You don’t really care about its hard cast mode, but rather the channel ability. If you channel it on turn two, on turn three you can tap it for mana, tap three lands and immediately cast Transmogrify on the Monk token. It results in you putting Titan of Industry on turn three which is absolutely backbreaking, especially on the play. It gives the deck the ability to win seemingly out of nowhere from an empty board as the opponent passing the turn might face end step token, untap, Transmo.

This is probably the best card in Explorer, Pioneer, and is so strong that is seeing extensive play in Modern. It literally does everything that this deck would want. Generically good token maker. It cycles so you get a bit deeper into the deck, the token flies which can be relevant in killing off opposing Planeswalkers or blocking, and if hard cast it threatens a real clock. Basically, the whole deck would trigger Shark Typhoon. If you make a, say, 6/6 Shark, not only does it clock the opponent really fast, but can also be copied with Reflection of Kiki Jiki.

This is our desired match-up. Rakdos has really difficult time grinding through Titan of Industry paired with the Rhino Warrior, especially if we are able to produce multiples. Even if they are able to prolong the game, there is a looming threat of Yorion, Sky Nomad blinking our Fable of the Mirror-Breaker, Omen of the Sea, and Esika's Chariot, which is not something they can really come back from.

Actually comboing off might be tough sometimes as a single Fatal Push hold us back, but the sheer potential for the combo makes them have to hold it up at all times. It further means that they might not tap out for Liliana of the Veil or Sheoldred, the Apocalypse. If they do, though, we’ll cast Transmogrify and probably win.

Last but not least, if they hold up Fatal Push specifically by holding up one black mana, Spell Pierce can get them good.

The best spots are when you resolve Esika's Chariot, it itself forces a mass removal, and then we play Transmogrify, preferably Lukka, Coppercoat Outcast. Once they’ve used the first mass removal, we can hold them against the ropes by demanding another Wrath of God every turn.

Game one we don’t want to draw Spell Pierce or Make Disappear. Post-board, however, it feels like a pretty good matchup as far as I’m concerned. They can’t ever win through Hornet Queen, Titan of Industry stabilises the game very well, we have a multitude of removal spells, and tokens to chump with. On top of that, they cannot really interact with our Transmogrify.

Don’t keep too slow hands and you should be good.

In my opinion, it’s a pretty good matchup. If both of us do our thing, our Titan of Industry blocks their Parhelion II and the tokens. Post-board, we also have access to around 15 pieces of interaction that disrupt their combo. While they can also disrupt ours with Fatal Push, a fair prolonged game favours us. Furthermore, we are not punished by holding up mana as we can play Omen of the Sea, Shark Typhoon or Careful Cultivation.

This is the one tricky matchup. If we want to win, we have to draw the efficient subset of cards and not the 3+ mana spells. It’s also going to be tough to squeeze through the combo when they are holding up Spell Pierce and other pieces of countermagic. It’s a really tough one. Keep efficient, low-to-the-ground hands.