We already covered [card name=”Phyrexian Fleshgorger”], Teferi, Temporal Pilgrim, and Monastery Swiftspear, Go for the Throat, and Soul Partition, but we still have more cards to go. Going over the spoilers, I spotted a card that I realized is going to not just make a huge impact in Historic, but possibly topple the majority of the tier one strategies! What card could it be? Brotherhood's End. 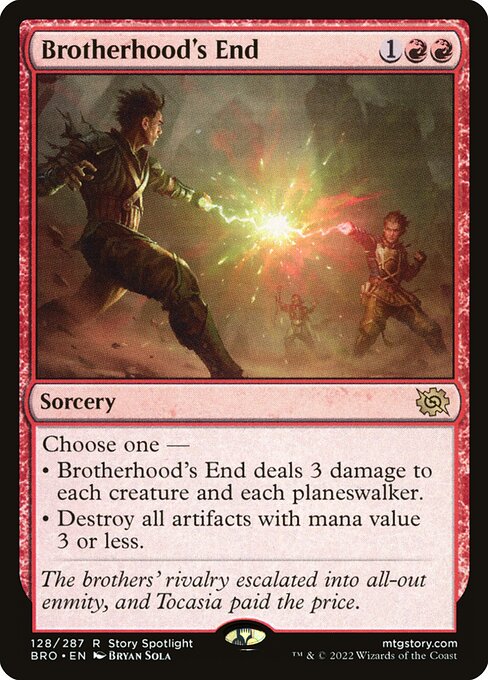 To understand where I’m coming from, we have to look at the top decks in Historic at the moment.

Let’s start with the Bo3 Tier list. In the top spots we have Azorius Affinity, Rakdos Goblins, and Izzet Wizards. Three mana 3 damage board wipes aren’t exactly new to Historic, so why would this one be so impactful? Obviously this isn’t hard to answer if we just look at the second ability of Brotherhood's End!

Something like Anger of the Gods is already decent against Affinity, but since you won’t be able to kill Nettlecyst or all the non-creature artifacts they play, its usefulness is very limited. However, when you have a board wipe that can also destroy a bunch of artifacts? Now that’s a nightmare for the deck. Considering the only artifact in their deck that dodges the artifact destruction mode is Thought Monitor, it’s safe to say that this is going to be extremely effective against them. What about the other two top decks? Well that’s what the first mode is for! A deal 3 sweeper is brutal against Wizards as literally every card in the deck dies to it. In terms of Goblins, it’s less effective as they’ll always have Muxus, Goblin Grandee to rebuild, but even with that in mind, it’s still quite powerful as it’ll kill everything else in the deck. With all this in mind, this will be an easy slam dunk board card for any Red deck interested in beating artifacts, even ones where you don’t want the wrath necessarily! I’m definitely going to be adding multiple copies to the sideboard of Izzet Wizards as Affinity is one of the toughest matchups!

I’m talking about this as if it’s a sideboard card, and while there aren’t many current decks that would want to main deck this, there certainly could be! If you play a bunch of copies main deck, you have the ability to hose Affinity (or other artifact heavy decks like Boros Thopters or Paradox Combo), have an excellent card against other creature strategies (which there are a lot of in Historic), and at worse, have a tool to injure some planeswalkers against decks this effect would normally be dead against. Furthermore, if you play something like Fable of the Mirror-Breaker, Seasoned Pyromancer, or Liliana of the Veil, you can pitch this away when it isn’t good! Considering the power level of the card, the utility, and other cards being able to rid yourself of it pretty easily in Red, this seems like a slam dunk in Historic.

Affinity has had a decently long reign over Historic because the sideboard options were extremely inefficient against them, but with this, that’ll no longer be the case. This is still a somewhat narrow card, of course, but this is the most versatile small board wipe that Arena has gotten and will definitely shake the metagame up pretty substantially.