The first look at The Brothers War just happened yesterday, and with it, we see a host of sweet cards and mechanics! I first covered Phyrexian Fleshgorger as that was the card I was the most excited about, but it seems that wasn’t the one that everyone was talking about!

Instead, most conversation was directed over the newest iteration of Teferi – Teferi, Temporal Pilgrim 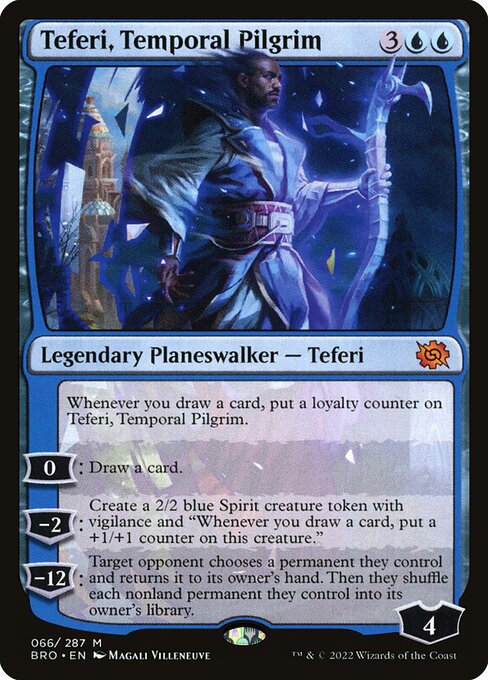 While I won’t show every argument I’ve seen for this card, I will show you the two ends of the spectrum I’ve seen.

So yeah, thoughts are pretty split here. I have seen opinions ranging from “this card should be banned on sight” to “this card is unplayable”, and I’ll admit, analyzing which side this is going to land on is not easy. Static abilities on planeswalkers are always a scary prospect as they remind many of some choice favorites like Teferi, Time Raveler and Narset, Parter of Veils which flew under the radar for some time. So how do we go about analyzing this planeswalker? Well we have to break down the card!

So we have a five mana Planeswalker that starts at four loyalty and a static ability that gives you a loyalty counter per card drawn. The static ability is what’s really causing the division as being able to keep accruing loyalty without necessarily using a “plus” ability is a rather powerful prospect. In that vein, the “0” draws a card, but thanks to the static, is in reality a +1. The -2 creates a Lorescale Coatl with Vigilance which can be strong with a planeswalker that’s focused on drawing cards. The ultimate resets your opponents board by letting them bounce a permanent of their choice (which should always be a non-land as lands aren’t affected by the rest of it) and the rest get shuffled into their library.

Now that we understand what the card does, the next thing I like to do when analyzing cards is finding the thing that it’s most similar to. Considering this card is so decisive, using historical precedence, even if imperfect, can help guide the discussion. Thinking through what the closest comparison is to this card, I landed on a planeswalker that many forgot even existed in Standard for quite awhile – Mordenkainen. I chose Mordenkainen as the plus ability draws cards, the minus ability creates a token, and the ultimate is high impact, but not game winning. Before comparisons though, we need to address the obvious – having a static ability versus not having a static ability is a tremendous difference. Teferi can (hypothetically at least) accrue a lot of loyalty quickly, even when using the minus ability a bunch. Second, six mana is a lot more than five mana. That may seem like a bit of an exaggeration as they’re both late game threats, but being able to deploy this a turn earlier whether it’s on curve or with interaction can easily make all the difference.

With that out of the way, let’s break down and compare the abilities.

Morden draws two cards and lets you put one back where Teferi is just a draw a card. Morden makes relatively big creatures off the back, in my experience, minimum 6/6s as you’ll usually have a few cards in hand where Teferi makes 2/2s up front that’ll need time to grow. Finally, Morden gives you a huge hand, but forces you to win quickly otherwise you’ll die where Teferi resets the opponents board, which won’t necessarily win the game, but could hypothetically set the opponent really far back.

So with the comparison so far, it seems Teferi is worse than Mordenkainen, who again, saw functionally no play. However, we absolutely can’t discount the difference in mana cost and the static ability as that makes a tremendous difference. So next, let’s examine the use case.

So say you play out Teferi and draw a card, you now have a Teferi at five loyalty, threatening to go to six, that the opponent has to kill. Assuming they spend a removal spell on Teferi, you at least recouped your card which isn’t a bad deal. If you instead opted for the creature, you would be left with a vigilant Lorescale Coatl instead of a card which could be helpful as it’ll grow to minimum a 3/3 on your turn. Furthermore, you could use draw spells anywhere from Consider to Silver Scrutiny to add loyalty to Teferi or size to the token. This is what I would envision being the general best case scenario for Teferi – the opponent doesn’t have the board presence to remove it and has to use removal. Obviously them having absolutely no answer is the real best case scenario, but in any game where the opponent has nothing to deal with your five drop, you are probably winning that game anyway.

If they have a board presence and you -2 to get the creature, the likelihood that they have multiple creatures is really high, and unlike Mordenkainen, a 2/2 isn’t going to adequately defend a planeswalker. Speaking of Mordenkainen, the big reason it never saw play was the play pattern with it was pretty much set. You play it, you get a huge Dog, and if the opponent has a removal spell, you just get obliterated. I envision Teferi is going to run into the same issue and have a much worse time as at least Mordenkainen‘s dogs were frequently huge where Teferi’s token is going to be relatively small.

Finally, Teferi’s ultimate doesn’t even make the most sense on the card. If they have a lot of stuff on board when you ultimate, you’re getting good value, but how did you manage to ultimate a planeswalker when the opponent has a lot of stuff on board? I guess if you managed to keep the creatures off the board this would be possible, but then why not just keep using the -2 to build an ever-growing army?

So realistically, this feels like a two ability planeswalker that’s hard to defend, but can grow large with a lot of card draw. Speaking of card draw though, there even isn’t that much of it in Standard right now as well. I already mentioned Consider and Silver Scrutiny (for what it’s worth, Scrutiny works well with Teferi), but that’s about it. Thirst for Knowledge is powerful, but hard to play in non-mono colored decks. Memory Deluge doesn’t draw cards. I guess Tolarian Geyser is ok? When you branch out into other colors it does get a bit easier, for example you can go Black for Kaito Shizuki or Tainted Indulgence, but that’s a lot of work to make a five mana card more tenable.

All in all, Teferi is a cool card that looks to have a high ceiling because of the powerful static ability, but is unlikely to really make a splash. A lot has to go right for Teferi to live, and in a Standard format flush with answers to Planeswalkers (a lot of them not even currently seeing play), the bar for Planeswalkers is extremely high right now. Even Liliana of the Veil which was considered one of the best planeswalkers ever printed years ago is struggling to see play in Standard, I don’t have high hopes for a five mana planeswalker that isn’t excellent.