Hello everyone! A few days ago I wrote about aggro decks, then midrange decks, now it’s Control’s time to shine. It’s kind of ironic that although Control is the archetype I tend to play the least, my largest claim to fame was creating both Dimir 8 Shark and Dimir Yorion. Sometimes that’s just how the cookie crumbles. With that, I’m quite confident in my ability to craft a strong Control deck and I hope that any or all of these lists serve you well in Kaldheim Standard. Let’s get into it. 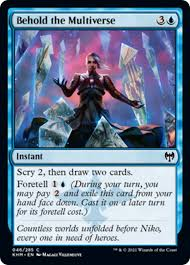 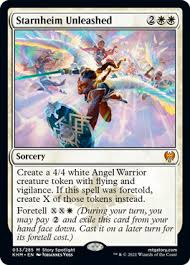 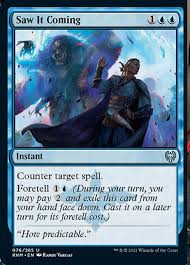 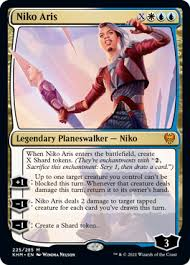 First we have to start off with Kaldheim’s best flagship mechanic, Foretell. Foretell is a great ability as it gives you something to do on turn 2 if you are lacking plays or can allow extremely valuable double spell turns later in the game. With so many powerful Foretell cards making their way into Standard, it’s only natural we shove them all together.

I wrote about Cosmos Charger before, but I still think this is one of the real sleepers in the set. A Flash body that makes all your other Foretell spells disgusting is a very powerful effect, no matter how you slice it.

Niko Aris, although I slated them as overrated, fits extremely well in this deck as it can pressure attackers early in the game or accrue a huge amount of card advantage later. The +1 isn’t particularly helpful, but if it allows you to keep minusing, you can do worse than to take off a turn with your Planeswalker.

The real appeal to the deck is the absolute conglomerate of instant speed interaction the opponent is forced to play around, whether they’re Instants or Foretell spells. If they try to deploy a creature, they can be running into an Essence Scatter, Saw it Coming, Doomskar, or an Elspeth Conquers Death. They want to attack? Beware the Cosmos Charger and the Shark Typhoon. They want to be conservative and pass or play very little? Guess you can play Behold the Multiverse, Cosmos Charger, Shark Typhoon, or untap to play a huge Niko Aris or Starnheim Unleashed. Every time you Foretell a spell or pass the turn with mana open, the opponent is put into such a tight spot of what to play around, and by design, the deck is very good at punishing the opponent no matter what they choose. 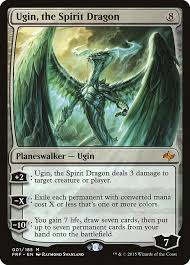 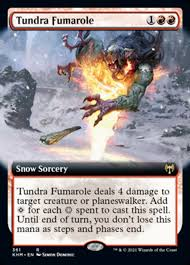 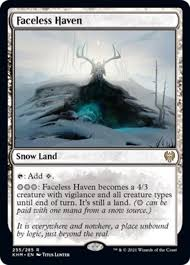 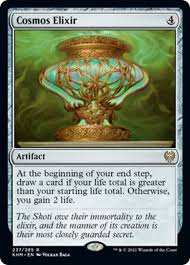 Monored Ugin saw a little bit of play in Zendikar Rising standard, but it never particularly got any main stream success. It’s not that the deck was bad , just that it felt underpowered compared to what you can be doing instead, barring Irencrag Feat into Ugin. Kaldheim didn’t give the deck a huge amount of new tools, but what it did give is going to be a game changer.

With the introduction of Snow lands and payoffs, I see a lot of 2 and sometimes even 3 color decks trying to utilize the great potential of Snow, but they all come up short to me. If you’re looking to leverage the Snow lands, you literally can’t do better than a monocolor deck, and you can’t do any better than being monocolored control with Ugin as the top end.

Tundra Fumarole is another card I slated as overrated as many players were trying to shove this into any deck that plays Red, a big mistake in my opinion. Tundra Fumarole hits it’s stride when you’re playing a deck of functionally all Snow lands and you can make use of the 3 colorless mana it produces. So in Monored Ugin where nearly all of the lands are Snow and a plethora of Colorless spells, this card is obviously insane. Casting a removal spell into a Mazemind Tome or Solemn Simulacrum is a humongous tempo swing and significantly increases the power level of the deck.

The other Snow payoffs, though not as titillating as Tundra Fumarole, are still quite good. Faceless Haven is a cheaper Crawling Barrens where you can’t grow it as large, but you can start chunking quicker. In a counterspell heavy deck I like Crawling Barrens because it gives you more to do with excess mana when you’re holding up counterspells, but in a more proactive deck like this, I prefer the cheaper threat. Frost Bite is a Shock to creatures or Planeswalkers turn 1-2, but then can generally be a Lightning Bolt on turn 3 for 1 mana which is a great deal for a single mana.

I know it’s in the sideboard, but another large draw to this deck is Cosmos Elixir. In slower matchups, you can generally get at least one card off of this and if you get to untap with it or play multiples, you’ll be churning through your deck in no time. 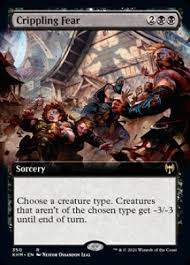 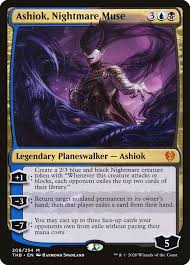 As Dimir Yorion’s Daddy, I’d be doing you all a disservice if I didn’t do an update on one of my favorite creations. When I created the first iteration of Dimir Yorion, the metagame was a lot slower so you could play slower cards like Atris, Oracle of Half Truths and four Ugin, the Spirit Dragon in the main deck, but you have to adapt with the times. Whenever a new set comes out, you’ll definitely get your wacky brews, but a lot of players also feel emboldened to play their new aggro decks (myself included). For this list, we trimmed down the curve a bit, added more lands, and a few more pieces of early interaction.

Kaldheim isn’t as exciting here as it is for other decks, but Saw it Coming and Behold the Multiverse are still excellent additions. Neutralize was always a fine spell, but the Cycle on it felt like flavor text unless you were extremely mana screwed or flooded. With Foretell, you can put it down for 2 and if they don’t cast something you want to counter immediately, you save yourself a mana for future turns. Behold the Multiverse is extremely similar in this concept as you can Foretell this on your turn to try and net a mana advantage later or just hold up the 4 and cast it normally on your opponent’s end step. It’s been awhile, but Glimmer of Genius was really good in Dimir Control when it was last Standard legal.

Beyond the main deck inclusions, we get a few spicy inclusions in the board. Disdainful Stroke doesn’t look like an amazing card, but when you consider nearly every extremely scary threat in Standard is 4 CMC and up, you’ll be happy they reprinted it. Crippling Fear serves 2 very important functions in this deck. One, it can be like Extinction Event copies 5 and 6 which is great in aggressive matchups. Two, you get to name wacky Creature types. Oh you don’t have any Kobolds? That’s a shame. Cephalopods? No? Uncle Istvans perhaps (still mad they errated this to Human)? Having access to a secondary 4 mana wrath is excellent for any control deck that wins by living as long as possible. I also included 2 Shadow’s Verdict which has the added versatility of exiling creatures from both the board and library, but whichever you want to play will be completely meta dependent. I like 4 Wraths in the board, and any combination of Crippling Fear and Shadow’s Verdict should be fine. 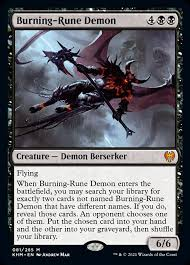 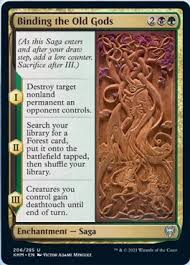 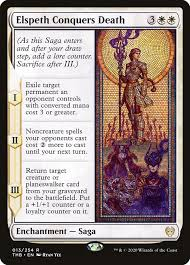 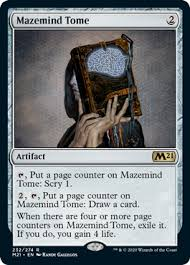 I tried Abzan Control right after the Omnath ban, and the deck felt really good, but ultimately I deemed that it wasn’t quite there yet for Standard. Since then, I’ve been keeping Abzan in my back pocket, waiting to see if Kaldheim would deliver winners to this archetype. I have no complaints, Abzan looks great now.

Burning-Rune Demon is probably an eye popper for most players who assumed it was an EDH card, but I think this card has some serious chops. Rune Scarred Demon was always a card that was on the precipice of playability, but being 7 mana would always be too restrictive to realistically see play. However, a 6 mana 6/6 is definitely more tenable in a deck that plays functionally 30 lands and multiple ramp spells. All that being said, I didn’t include Burning-Rune Demon because it’s cute or it’s a new card, there’s a really powerful synergy with Demon in this deck if you see it. For those who don’t, Burning-Rune Demon looks for 2 cards, the opponent puts one in your hand and the other in the graveyard. Sounds like making the pile of Ugin, the Spirit Dragon and Elspeth Conquers Death is pretty good then, no? Having a 6/6 that functionally will always get you an Ugin seems like it’s more than worth the slot to me, and does significantly more than Garruk, Cursed Huntsman ever did.

I’ve talked about Binding the Old Gods a lot, but this card is just bananas, especially in a deck looking to play a host of expensive cards. I played 4 Elspeth Conquers Death in the past despite it not even being that good in this deck because the effect was irreplaceable, but for Abzan, Binding the Old Gods is the surrogate it desperately needed. Kill anything then ramp? Busted.

Beyond the new cards, we’re going a very traditional style of tap out control, play a lot of great interaction, follow it up with great threats. If the concept isn’t broke, don’t fix it. 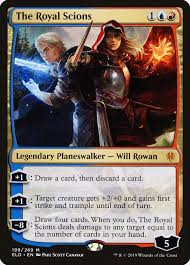 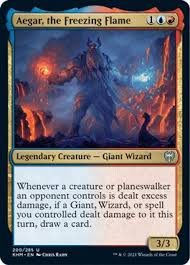 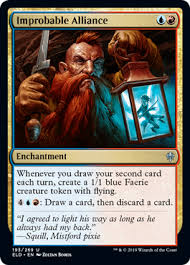 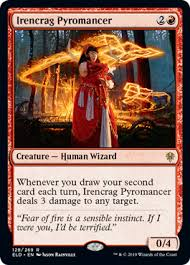 So to be honest, I’m not entirely positive if this is more of a midrange deck or a Control deck, but any deck that’s looking to grind the opponent out and win through either one large spell or small advantages is a Control deck to me. This deck was actually an idea Chris Kvartek had months ago, but recently got some attention by putting a few players into the top 8 of a Standard challenge.

The only new inclusion to this deck is Aegar, the Freezing Flame, but I think a lot of people are sleeping on the power of this card. Every time a Giant, Wizard, or spell deals excess damage to a creature or planeswalker, you draw a card. Considering our deck is mostly Giants, Wizards, and spells, that isn’t a particularly tall ask. Irencrag Pyromancer is already a great card, but if you get to draw cards when it starts killing your opponents board? That’s extremely powerful. You can have a Bonecrusher Giant out, play Aeger, and now the opponent has to think twice if they want that block or not. Even something as simple as Aegar into Thundering Rebuke is now a fantastic play when you get your card back. You can even get really cute with stuff like Shatterskull Smashing, but I think you get the idea.

This deck is all about how many extra cards you can draw over your opponent before they question their deck choices. With a combination of Irencrag Pyromancer and Improbable Alliance, drawing extra cards nets you rewards. When you consider that The Royal Scions, Aegar, the Freezing Flame, Ox of Agonas, Opt, and Frantic Inventory all allow you to draw extra card as well, it’s easy to see how this deck can really go nuts when given the opportunity to do so.

That’s what I have for today!  Did I leave out any super sweet Control brew you’ve been working on? Let me know in the comments! I hope you enjoyed the series and tomorrow, I have an extra special treat for you. Not only will I talk about my favorite decks from each of the articles I have written, they’ll be my absolute favorite decks I’ve been saving for Kaldheim’s release as well. Be sure not to miss it! Thank you for reading and have a great day!