Now that The Brothers' War is fully spoiled and I’ve gotten the chance to pore over the cards multiple times, it’s time to start brewing some decks! We have a lot of our authors brainstorming a multitude of sweet lists for you to look at, and then try when the set releases! To help aid with the cool decks you can potentially try with the new set, I stepped out of my wheelhouse a bit from my normal Aggro and Control proficiency to talk about some combo decks today!

Generally speaking, it’s pretty rare that Combo is a viable archetype in Standard due to the aggressive options being too good, the payoffs being too weak, there being too much disruption, or a combination of the three. However, we are in a pretty unique Standard where Combo could realistically thrive! I believe there will be some pretty strong aggro decks coming out of The Brothers' Warand the disruption is quite good, however, the payoffs for Combo are much stronger than we’re normally afforded which really piqued my interest for this set.

Before I continue, I want to define what I believe a Combo deck to be. In general, I view a combo deck to be one that is built around maximizing the potential of a single card (sometimes multiple, but generally one) – this effect can instantly win the game or just functionally do so, because if it can’t, not much point in playing it! I realize this may be a broader definition of combo than most, but that’s the way I see it.

Without further ado, let’s take a look at three distinct combo decks that may be great with the release of The Brothers' War.

Gruul Over the Top

Gruul Over the Top
by DoggertQBones
Buy on TCGplayer $237.82
Standard
Combo
best of 1 For my first deck, we have a brand new combo card with Over the Top!

Over the Top is an interesting payoff most similar to Glimpse of Tomorrow in Modern as the deck is asking you to have a lot of permanents out to transform them into something better. Like Glimpse of Tomorrow, this effect is symmetrical so both players can benefit from this. The scary part about Over the Top versus Glimpse of Tomorrow is two fold. One, Glimpse is functionally three mana as that’s the cost of the Cascade card you need to get it. Two, Glimpse shuffles those permanents into the library rather than being additive so the opponent can be left with a bunch of random permanents with no cohesive plan while Over the Top will only make both yours and your opponent’s battlefield better. With these two flaws in mind, you would think this is not even close to a tenable win condition, but with the potential payoff you can flip into, I think this is actually quite reasonable!

The keys to making this payoff tenable is that you need to put a reasonable amount of permanents onto the battlefield, you need to ramp relatively quickly, and the cards you flip into have to be extremely powerful to justify playing this.

For the first key, while we don’t have an excess of cards that create multiple permanents, we do have a few in Jewel Thief, Fable of the Mirror-Breaker, Stimulus Package, and technically Titan of Industry. In particular, Stimulus Package is a really powerful card for this deck as this creates a lot of permanents and can help you cast Over the Top quicker.

For the second key in terms of ramping quickly, we have Llanowar Loamspeaker, Jewel Thief,Topiary Stomper, Azusa's Many Journeys, Careful Cultivation, Fable of the Mirror-Breaker, and Stimulus Package for ramp. That is a lot of ramp, but if we’re looking to cast a seven drop ahead of schedule so that’s not too crazy.

Finally, we reach the final key with the payoffs. The awkward part about Over the Top is, as a seven mana spell, it’s going to make our deck somewhat clunky already. To make matters more complicated, we want to play other extremely high impact cards to make it worthwhile, and for the most part, high impact cards are pricey. To not make our deck insanely clunky, we can only afford to run a few payoffs, but the ones we do run are excellent. Titan of Industry has already proven itself as an excellent finisher with it’ versatility and raw power. For the new addition to the payoffs, can help undo a lot of the value that Over the Top can give to your opponent, and then act as a win condition itself!

With all these factors combined, I think Over the Top can be a potentially real combo deck as you can be reasonably fast, and resolving any of your payoffs should win you the game more often than not. Considering we have twelve powerful cards to potentially resolve, this shouldn’t be too much of an issue. 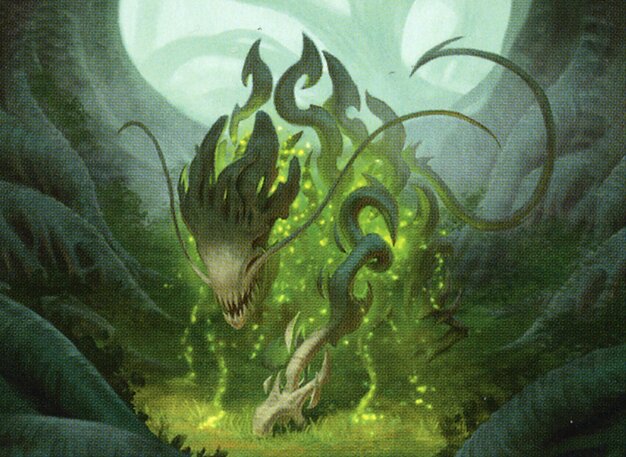 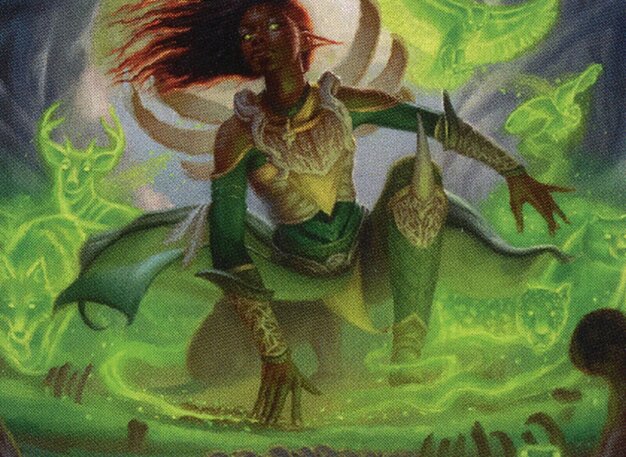 For the second deck of this list, we have a familiar face with Jund Reanimator!

Obviously Jund has already been a pretty big player in Standard so I don’t need to go through all the choices as this is mostly just an adjustment to Reid Duke’s list, but I think this is definitely worth discussing!

First off, we’ve gotten two more excellent cards to help the consistency of the deck. First off, getting back Satyr Wayfinder, even if a bit weaker this time around with , this card is fantastic. Whether it’s just guaranteeing your land drop, adding some bombs into your graveyard, or even milling additional lands to help out with Soul of Windgrace. For a two mana card, this is a lot of value for this deck. Furthermore, we get Fauna Shaman which can help with consistency as well.

While Fauna Shaman is just a two of here, it’s quite powerful as it’s another card you can deploy in the early game which the deck desperately needed, it can help you find Titan of Industry to pitch, and can then put Titan of Industry in your graveyard and find another creature after! While this deck didn’t struggle with finding Titan of Industry because of The Cruelty of Gix, but putting it in the graveyard can be more problematic. Between Shaman and Prowler, this won’t be as common of an issue.

The second big improvement that this deck gets from The Brothers' Waris easily Phyrexian Fleshgorger. I talked about this card already, but I’ll give a refresher.

First off, Fleshgorger can be a three mana 3/3 that can help stabilize with Lifelink and is annoying to kill because of the Ward ability. However, if you need a ridiculously large creature to reanimate, Fleshgorger can easily be a strong target. While the prototype is a nice 3/3, getting a 7/5 with Menace, Lifelink, and a huge Ward cost is quite powerful. While it’s not as good of a reanimate target as Titan of Industry, Fleshgorger is very versatile, and if you need a powerful win condition, Fleshgorger can do that for you.

The final upgrade, and perhaps most innocuous, is the printing of Go for the Throat. While I expect Go for the Throat to be an excellent addition to many Black decks, it’s particularly powerful here as it’s a catch all removal spell that doesn’t cost you any life. Since Jund is going to be on the back foot at the beginning of the game, having means to kill larger creatures without trading precious life is a huge advantage.

With these four new cards, I expect Jund to come back into the limelight as a much more consistent and powerful option in this Standard. 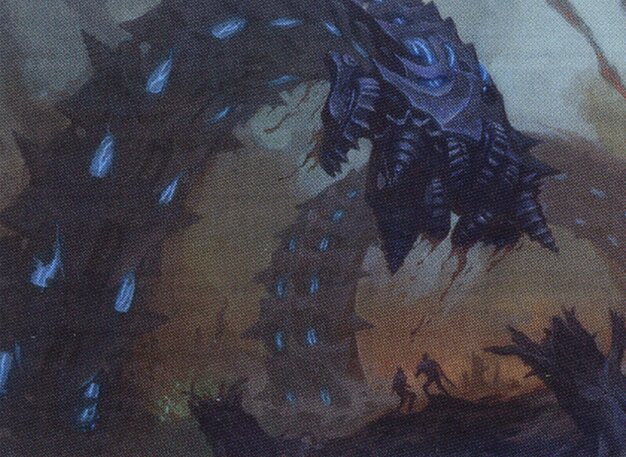 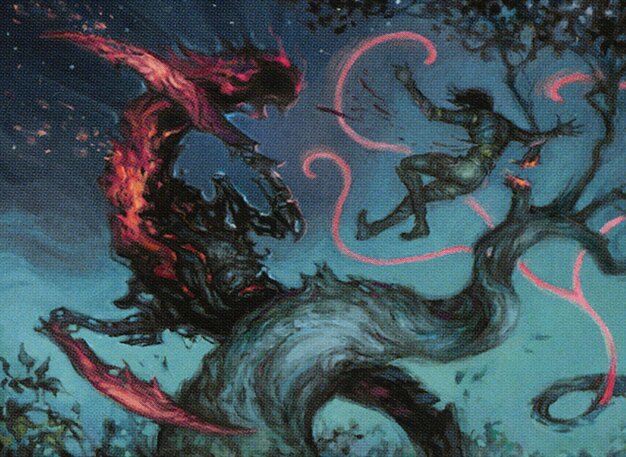 For the final combo deck of this list and the one I’m the most excited about, we have Jund Chaotic Transformation!

While Chaotic Transformation isn’t a new card, it may as well be since it had pretty much no talk surrounding it and saw zero play. To be fair, it’s not particularly surprising why. Not only is it relatively difficult to set up and expensive itself, the payoffs weren’t even there! Sure, you can get Titan of Industry into play which is obviously powerful, but what was the artifact payoff? I actually made a brew with Chaotic Transformation when Dominaria United was spoiled, and when I was looking at the artifact payoffs, the best I found was Walking Skyscraper. Yeah… A combo deck is truly only as good as it’s payoffs, and I wasn’t surprised that Transformation saw no play due to how bad the payoffs were. However, with The Brothers' War that may no longer be a problem.

I’ve talked about this card a lot already, but Phyrexian Fleshgorger seems like a really important card for a lot of these decks to thrive. For Chaotic Transformation, it counts both towards the creature and artifact ability letting you potentially get two of these out on the battlefield with a successful transformation. At that point, the only hope your opponent will have is either having enough creatures to block this or a board wipe to not just die on the spot. Of course, Fleshgorger isn’t the only payoff we have! I’m also playing Titan of Industry here (making it in all the lists) as a really powerful creature hit off of the Transformation to help pad the relative count. Finally, for additional artifact hits, we have Portal to Phyrexia which is insanely powerful, especially when you’re not giving them good sacrifice fodder with Over the Top!

In terms of how we’re going to consistently cast Chaotic Transformation, we have a boat load of ways to get it to work. To hit creatures, we have prototype Phyrexian Fleshgorger (which doubles as an artifact), Burn Down the House, Azusa's Many Journeys, Careful Cultivation, and Fable of the Mirror-Breaker. To hit artifacts, we have Phyrexian Fleshgorger again, Big Score, Fable of the Mirror-Breaker, and the lone Stimulus Package. Finally, while not an important type to hit, we have thirteen enchantments that we can cycle into a different one if you wanted to. Furthermore, between Azusa's Many Journeys, Careful Cultivation, Fable of the Mirror-Breaker, Stimulus Package, and Big Score, we have a lot of ways to accelerate on mana and cast Chaotic Transformation ahead of schedule. Although Treasures do work a bit awkwardly with Transformation as you would want to use them to ramp faster, you can produce a lot of mana so having an excess Treasure to sacrifice shouldn’t be too large an issue.

The final element I like about this deck is how reasonable it is even when you can’t go nuts with Chaotic Transformation. Just playing ramp and hard casting a Phyrexian Fleshgorger or Titan of Industry is not only very powerful, but very reasonable in this deck as we can even cast them as early as turn four (turn two ramp, turn three Big Score or Stimulus Package, thurn four seven drop)!

With a solid proactive plan and a lot of ways to enable it, this may be a combo deck that can actually fight with the best of them in Standard.

Thank you for reading! Come join our Discord community, discuss the new spoilers, and more.