We just got another dump of Phyrexia spoilers yesterday, and unsurprisingly, there have been a swath of super sweet cards to look at! While there are plenty to cover, there’s one I knew I needed to cover as it holds a very special place in my heart for me, so while it’s an older spoiler, let’s talk about Phyrexian Obliterator!

So first, why is this card so special to me? It’s the card that got me into Magic! New Phyrexia was the first set that really invigorated my interest in Magic, and this was the first Mythic I pulled from one of the packs. This card seemed insane! How do you kill this thing? It’s huge and is such a roadblock! Like me, I’m sure many others find Obliterator nostalgic and I’m thrilled to see it get a reprint. However, has it stood the test of time? Let’s first break down the card.

So we have a card that costs BBBB, which back in the day seemed crazy, but since the advent of Invoke Despair, that mana cost isn’t so crazy to look at anymore!

What do you get for playing that many Black lands? A real tough creature! Not only is it a 5/5 Trample, but if any source would damage it, that source’s controller has to sacrifice that many permanents! So to kill this thing with damage, you would need to sacrifice at least 5 permanents and whatever card(s) you used. You’ve heard of 2 for 1s and 3 for 1s, but 6 for 1s? That’s a nightmare.

While this is a Timmy’s dream, we do need to add some context. While this card looks awesome, I want to be clear that this saw pretty much no play back in the day. Standard was really strong back then, but this wasn’t close to making a real splash as the set right after New Phyrexia was Innistrad, and that was arguably one of the strongest Standard sets ever.

So, with all this context in mind, does Phyrexian Obliterator have a chance this time around, or will it be relegated to trade binders yet again?

To properly analyze this card, we need to talk about the downsides. We could talk about the mana cost, but as we’ve established, that’s actually not that unreasonable in this Standard environment, so while a downside, it isn’t a substantial one. The next most obvious downside is removal. While damage spells are going to be horrendous against it, premium removal like Go for the Throat or the new Ossification is obviously going to be great. Am I saying creatures are bad because they die to removal? Of course not, but there are going to be a lot of good removal spells running around, not that it’s deterred Sheoldred, the Apocalypse.

Speaking of Sheoldred, the Apocalypse, that’s the biggest argument I’ve seen against using Phyrexian Obliterator. Realistically you’re playing them in the same decks, they’re both good against Red decks and small creature decks, and they are both four drops, what chance does Obliterator have? Well, while I do believe Sheoldred, the Apocalypse is the stronger card, it’s not strictly better.

First off, I would argue that Obliterator can be a much quicker clock. While Sheoldred is excellent at sitting back and pulling the game out of reach, Obliterator will demand a quick answer or it’ll run away with the game just as fast. If the opponent can’t kill a Sheoldred, as long as they have a high life total, the game isn’t going to end that quickly. If the opponent can’t kill Obliterator, they have only a few turns to sort themselves out. Next, and not Standard relevant, but this does provide a lot of devotion for Nykthos, Shrine to Nyx decks. While both are good against Red decks, Red can kill Sheoldred, the Apocalypse by 2 for 1ing themselves where that’s not possible with Obliterator. Do I think Obliterator is going to overtake Sheoldred? No, as Sheoldred is much better in three color decks that play Invoke Despair. Although Invoke Despair is also four Black symbols, they have a one land leeway which you don’t have with Obliterator. Even in Mono Black or two color Black decks, Sheoldred, the Apocalypse is still likely going to be better, but that doesn’t mean Obliterator can’t see play! Whether it’s a one or two of to fill out the four drop slot or even a board card for the small creature decks, I can still see Obliterator being a real menace in Black decks.

As a parting note, although I’m happy the old fast lands are being reprinted, it’s a shame that we’re not getting Blooming Marsh back into Standard for Phyrexian Obliterator. Why? No particular reason. 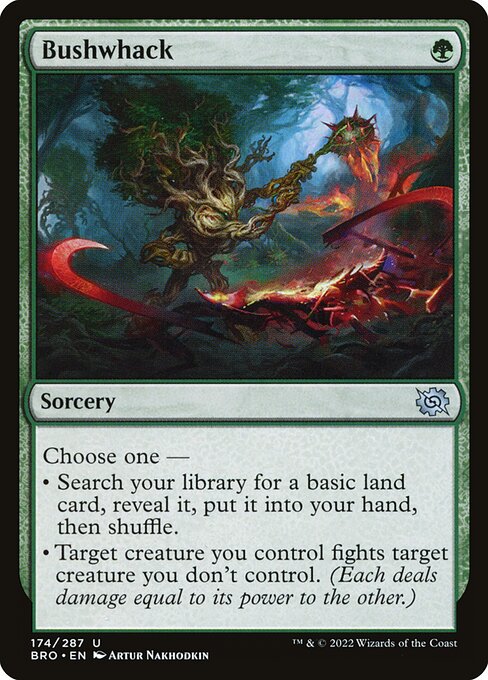