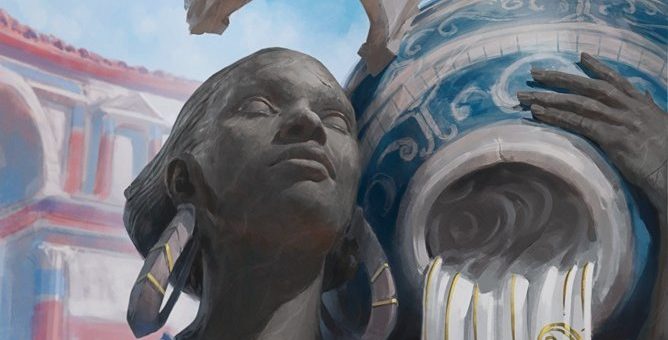 Theros Beyond Death is the latest expansion released just yesterday, adding more than 250 cards to the Standard card pool. While the new cards are not on the same level of power as the ones from Throne of Eldraine, they are good enough to make players excited to try out new brews and attempt to shakeup the old metagame. This is our roundup of all the interesting decks from the first day, featuring decks played by Mythic players, pros and streamers.

Do note that players should be thinking twice before committing their precious resources such as Wildcards early on after a set release. Popular decks from the first week can disappear very quickly once people figure out how to beat it, and a metagame will form again as tournament and event results start to come out. In these roundup articles, we will be presenting the decklists below but first, we will be highlighting individual cards so our readers can be better informed should they choose to craft them.

January 18, 2020: We’re now past day 1 of the Theros Beyond Death metagame – check out our Standard deck page for all future upcoming decklists and archetypes!

Alseid of Life’s Bounty is a card that has impressed many so far, and fortunately it is just an uncommon. It is very versatile in its roles – whether it be an enchantment, lifegain or protection enabler. It is akin to Siren Stormtamer, and can be considered even better. Naturally, it fits well in the Mono White Devotion deck featuring Heliod, Sun-Crowned that can put counters on your creatures left right and centre, and has been dubbed “Soul Brothers” along with Daxos, Blessed by the Sun. It looks like Linden, the Steadfast Queen has found her home, but consider that Heliod is a pretty niche Mythic that you should keep an eye on, but shouldn’t rush into.

Mono Black Devotion has been one of the most popular decks so far on the ladder, and one of the reasons is Gray Merchant of Asphodel being a key card only at the uncommon level. As is with these types of decks, being a creature based deck without good enough backup plans make them weak against control decks. Nightmare Shepherd and Woe Strider have also been almost staple cards players have been including and their effects are generic enough that you may find a use for them later down the track.

The new Sagas are also the talk of the town at the moment as players are beginning to find out how good they are. Starting at uncommon, we have The Birth of Meletis is perfect for a more controlling deck to stall your opponents and it makes sure you don’t miss your land drop. Elspeth Conquers Death is also a great catch-most removal spell for planeswalkers and creatures alike from the first chapter. Its effect also seems generic enough to be relatively safe to craft.

Next up, Shatter the Sky is the catch-all removal spell control players have been looking for as cards like Defeaning Clarion and Time Wipe were not good enough some times. The 4 mana cost is huge, as it can mean the difference between life and death especially if you are on the draw. Dream Trawler is also being touted as one of the key cards of the format, giving the White/Blue based decks the best finisher it needed. Being able to protect itself without paying any mana makes it very difficult to deal with.

Both of these red Escape cards – Phoenix of Ash and Ox of Agonas – are also being tried out in a few builds, namely ones featuring Arclight Phoenix. The deck finally has a great way of using its graveyard, and these two cards fill that role just fine. While Phoenix of Ash seems like a fine card, be wary of the Ox though it’s definitely a card keeping an eye on – but there’s a lot of Mythics in this set that may be worth your attention more.

The two titans still are out to prove themselves in their respective deck archetypes, whether it be the ramp or sacrifice deck where they obviously needs to be tested first. Holding off on crafting them would be a good idea, though they look extremely tempting.

This deck is great for showcasing the new Theros Beyond Death cards and to find out how each one of them performs. It consists mostly of enchantments and uses the Sagas to generate lots of value, topping that off with Dream Trawler as the ultimate finisher.

This version of Mono Green Devotion aims to generate tonnes of mana off Nyxbloom Ancient and untapping Nyx Lotus with Kiora, Behemoth Beckoner, then using Finale of Devastation as the win condition. It is a fairly linear deck that may be weaker to disruption (now that the new Shatter the Sky is also around)

This is an enchantment based control deck featuring Doom Foretold, using a lot of the enchantment cards from Theros Beyond Death. Not needing to rely on Dance of the Manse as the win condition is a nice bonus since the deck is becomes less predictable.