Adeline, Resplendent Cathar is the commander you need to get your 15 Daily Wins in quick succession. It’s easy to pick up if you read this article (no more than 3 minutes), I promise!

MTG Arena Zone is expanding deeper into Historic Brawl content, and we will be supporting the community! We will be working with the Brawl Hub community and sponsoring their weekly leagues and tournaments for competitive Historic Brawl.

Each week, we will invite the player who went 3-0 in the league to guest and showcase the Historic Brawl deck that they used here. Enjoy the first edition, featuring Adeline, Resplendent Cathar!

For more information, join the community and secure your spot in the league and tournament. We’ll post the relevant links below:

Since Historic Brawl went from 60 to 100 cards, it has become difficult to build singleton aggro decks that have consistently strong openings.

To have a hope of punching through 25 life, it’s necessary to play a deck that is both resilient against control and aggro, and that punishes midrange and combo decks for their “set up” time.

If you want a deck that wins against both aggro and control and beats the tier 1 decks (such as Kinnan, Nicol Bolas, Dragon-God, Niv-Mizzet, Uro, Esika, and the Teferis) in the format, this is the deck for you! “But how did you build such a decklist?”

I’ll explain you the deck in general through the following plan:

The Color Identity (by elimination)

Since MTG Arena doesn’t offer many viable dual lands for two-color decks, single-color decks tend to curve better and don’t suffer from mulligan dilemmas because you have a good curve but not the right lands to go with it.

Except for Blue (which is not designed to be an aggro color), there are 4 colors left to choose from. Here are the reasons why I’m going to keep only White (everything I’m going to say is only for the Arena card pool).

This left me with White, which has:

Protection spells that prevent your board to get removed thanks to hexproof, protection, indestructible cards, and so on: 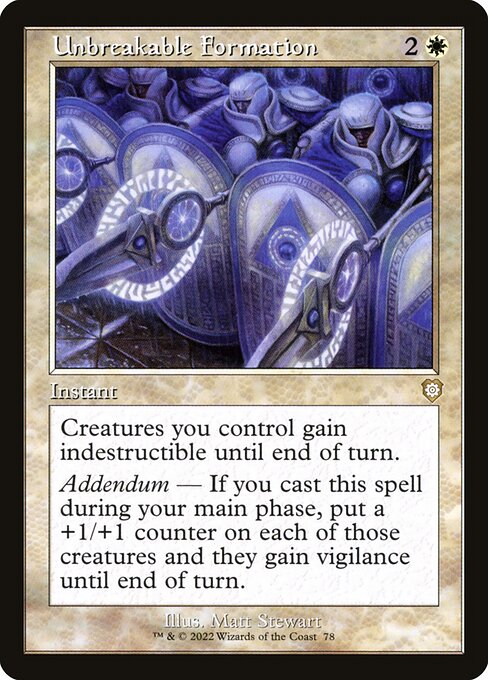 Interaction spells to prevent the opponent from developing their game plan: remove their creatures, their planeswalkers. 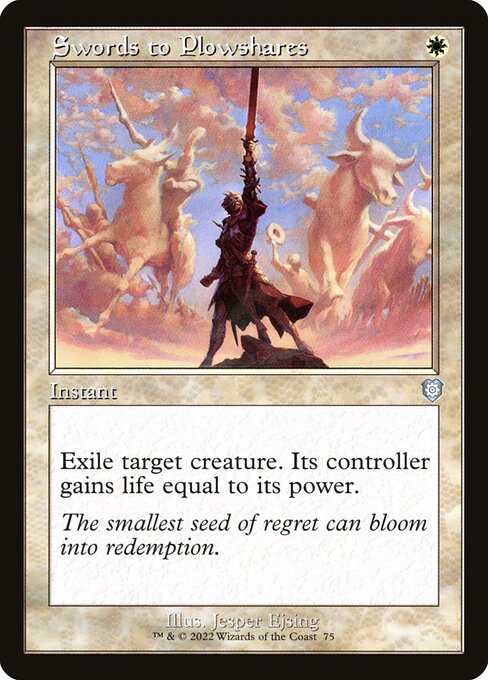 Taxing cards against Blue-based control decks (counterspells) or control decks who often wrath. This forces them to commit their game plan. Opponent will have trouble playing during your turn, and thus counter/kill your cards. This will force them to play during their turn, allowing you to see their game more clearly.

The best 1 and 2 drops in white to play aggro and the most versatile cards. Those cards are here to resist against control decks but also to win in aggro mirrors by speeding them up and winning because you play more resistant creatures: The Best Commander (by elimination)

Finally, why choose Adeline, Resplendent Cathar? Let’s take a look at the other candidates. We have Isamaru, Hound of Konda for consistent early game, Thalia, Guardian of Thraben who destroys control decks and Reidane, God of the Worthy who breaks control and midrange game plans.

However, after the Historic Brawl went from 60 to 100 cards, many decks disappeared from the format because they couldn’t find 40 more playable cards without a significant drop in power level. Only “non-niche” commanders survived the format, I’ll call them the “good stuff” commanders.

To do this, we need a Commander who can resist control, either with taxing cards or who can catch them off guard: This does not take away any of the other Commanders I have suggested so far.

Then, we need a deck that can recover from a board wipe. Isamaru unfortunately does not accomplish this task, because the goal of such a deck is to throw up its hand as fast as possible and pray that there is no wrath (similar to typical Red decks).

Thalia does not allow us to play the best white non-creature spells in the format at their true mana costs (mana tithe, sword to plowshares, curse of silence, etc…). Moreover, a 2/1 body against aggro is quickly outmatched after turn 3 or 4.

Finally Reidane has evasion (with flying), can prevent wraths for 1 or 2 turns and can block against aggro decks (with vigilance). However, the commander does NOTHING when it arrives the turn it is cast. It’s important to play as many proactive cards as possible in aggressive lists. So, I named Adeline, Resplendent Cathar, the best commander in 100-card Historical Brawl for these reasons:

Finally, if you want to win, here’s how you should play against each archetype to avoid losing easily.

The deck has shined on many tournaments and regularly beats many Tier 1 Commanders like Kinnan, Nicol Bolas, Dragon-God, Niv-Mizzet, Uro, Esika and the Teferis. The deck is very versatile and only really struggles against Tasha, Unholy Archmage (50% win rate).

As I write this article, I am 12-0 on the Brawl Hub League, where other people come to play their optimized lists at a very competitive level. You can join us on Discord to participate in the league and a tournament at the end of the month for prizes (sponsored by MTG Arena Zone)!

Hope to see you there to beat me! 😛