We already covered Phyrexian Fleshgorger, Teferi, Temporal Pilgrim, Monastery Swiftspear, Go for the Throat, Soul Partition, and Brotherhood's End, and we still have more cards to go! Next up we have a cool little removal spell that’s generating a lot of buzz on social media, the closest analog to Swords to Plowshares or Path to Exile in a while – Lay Down Arms. 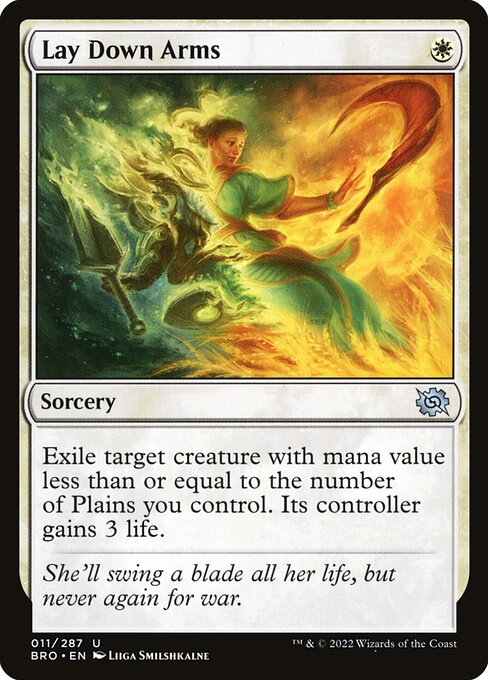 Lay Down Arms is a single White removal spell that can exile any creature and give that player 3 life, barring that you have Plains equal to the creature’s mana value. This is a relatively awkward card because you’ll need to be playing a large number of Plains to start with to make this tenable, and you’ll always have to wait to hit the requisite land drops to kill your target. Between these two restrictions, it feels like this is a miss as it’s difficult to get to work compared to something like Leyline Binding which can get substantially discounted quickly, but I believe this is going to be substantially better than it looks.

First off, exiling creatures is a huge deal in Standard right now. Between Tenacious Underdog, Dennick, Pious Apprentice, Ludevic, Necrogenius, Ao, the Dawn Sky, and many others, exiling creatures is excellent right now. Even if the creature doesn’t have value in the graveyard, denying opponents from exiling it with Corpse Appraiser or returning it with Invoke Justice is still valuable.

Second and speaking of Invoke Justice, we already have multiple Mono White decks in Standard right now that can make really good use of this. Boros Invoke in particular is one of my favorite decks right now that has actually been lacking a good removal spell, so having access to this effect would be excellent.

Beyond Boros, we also have Mono White Midrange that has been putting up decent results and even Mono White Aggro that could be reasonably positioned. While this doesn’t look like a card that would see play in aggro, it’s much better than not being able to get past a big creature at all!

Third, this counts all Plains, not just basic Plains. That means any land with basic land typing, whether that’s Triomes or shocklands, counts towards this. While in Standard you’re going to be limited to predominately mono white decks, in older formats, you could play multicolor decks and still be able to easily use this. Furthermore, in any strategy that can afford it, this isn’t that much weaker than , and them gaining some life is much better than giving them another mana to work with.

With all these factors combined, we have quite the powerful removal spell that I envision will see more play than most anticipate.

This isn’t as powerful as Swords to Plowshares and more restrictive than Path to Exile, but if you can manage the deck building cost, you have a very powerful removal spell on your hands.