A conjured card is added to the game.

Conjure is a digital-only, Magic: The Gathering Arena exclusive keyword action mechanic first introduced in Jumpstart: Historic Horizons. Conjure creates cards out of thin air as a digital object that acts just like a normal card would (as compared to tokens).

Powerful spells and artifacts can conjure up iconic, powerful, or just plain useful cards – from Tropical Island, Stormfront Pegasus, to Ponder, and more. These cards are cards that did not exist in the player’s main deck or sideboard previously, nor is it a token or a copy of any spell. It is treated like a normal card once created, and can be conjured directly into the hand, graveyard, or battlefield.

As of March 6, 2022 there are 20 cards in MTG Arena referencing the Conjure keyword. As this is a digital-only ability, cards have been designed only for the digital MTG Arena formats such as Alchemy or Historic.

8 cards with conjure was first introduced with Jumpstart: Historic Horizons, to herald the first digital-only cards in MTG Arena. As the set name suggests, these cards were made legal in Historic formats but not in Standard. 2 cards with seek was added in Alchemy: Kamigawa. Sacrifice themes have been a staple archetype in MTG Arena, as it generates a lot of value and can outlast most decks if given the chance. Sanguine Brushstroke conjures Blood Artist, one of the most powerful sacrifice payoffs from Magic’s past, and if combined with other sacrifice outlets such as Oni-Cult Anvil, creates a very powerful result. Merfolk decks want to be as fast a possible, and any one drop that fits into its tribal theme is worth a consideration if it has a decent effect attached to it. Shoreline Scout is one of the best ones currently available in Historic, with a 2/1 (most of the time) body and a mana fixing ability. 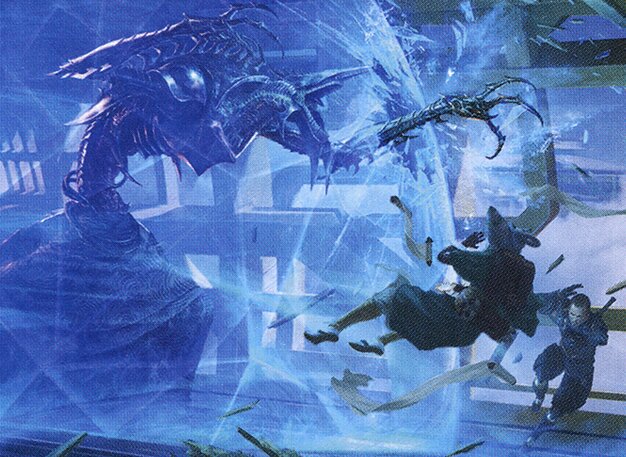