It seems like Magic: The Gathering’s latest Standard-legal set Dominaria United released just a couple weeks ago, but follow-up expansion The Brothers’ War is hot on its heels with a November 18 worldwide release date. Just today, Magic’s head designer Mark Rosewater posted his traditional teaser for the upcoming set on his Tumblr, Blogatog.

His teasers usually contain information about the set’s most interesting mechanics, abilities, creature types, and more. While you won’t find any explicit spoilers in this post, these teasers are a great way to get hyped for the set and get a feel for what the game’s head designer is most proud to present players.

Here is MaRo’s teaser for The Brothers’ War:

Before previews for The Brothers’ War officially begin, I thought it would be fun to do another of my Duelist-style teasers where I give tiny hints of things to come. Note that I’m only giving you partial information.

First up, here are some things you can expect:

Next, here are some rules text that will be showing up on cards:

Finally, here are some creature type lines in the set:

For the answers to these puzzles and so much more, tune in to the official Magic YouTube channel or twitch.tv/Magic at 9 a.m. PT/noon ET *October 27* to watch the debut video for The Brothers’ War. We’ll kick off previews leading into an amazing weekend with the World Championship (airing on Twitch.tv/magic Friday-Sunday) and Magic 30.

MaRo’s teasers never fail to excite his readers without giving too much away. Here are some of the items on the list that we’re most excited to see on the new cards and some guesses as to what they could mean for the game.

Another card with End The Turn Ending a turn of Magic is a pretty rare effect, having appeared on cards only six times in the game’s history. As you can see from past cards with this effect, ending the turn is either prohibitively expensive or used as a downside or failsafe against shenanigans, as with Day's Undoing.

Even so, it’s can be an incredibly powerful effect when used at the right time, and any new card that lets you do this is sure to pique the interest of casual and competitive brewers alike. Remember Karn, Living Legacy? When this card was spoiled, many on Magic Twitter condemned it as one of the worst Planeswalkers in the game-and with good reason. Karn’s +1 ability let you create a tapped Powerstone token, which would be a really interesting ramp ability for a lot of decks, except it could only be used to cast artifact spells or pay for abilities.

Now we can see that this poor Karn was likely printed in Dominaria United to set up a Powerstone theme in The Brothers’ War. Even if we don’t see a bunch of new cards that create or key off this specific token, we know the upcoming set will be chock full of artifacts that might make the Living Legacy’s ramp ability relevant in competitive formats.

This teaser is sure to delight MaRo’s most hardcore fans and players with a deep knowledge of the game’s history. What is an Onulet, you might ask? Well, it all started with a mediocre artifact and the creative team’s love of anagrams… 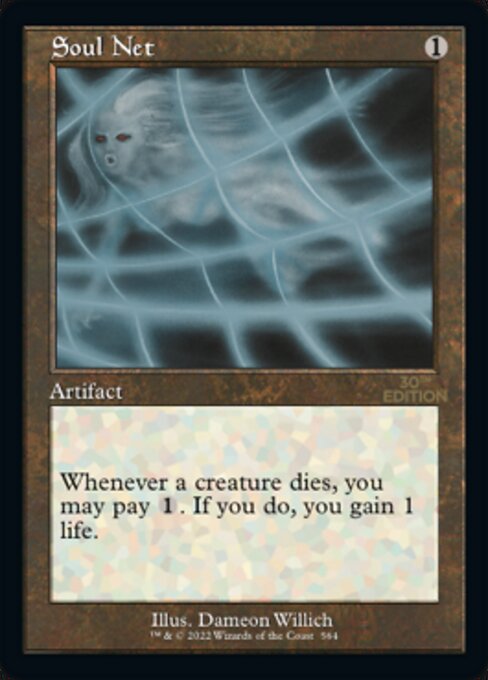 According to this old article from Magic’s website archive, the original card called Onulet was an anagram (without the S) of the older card Soul Net. Both cards gained life when something went into the graveyard, you see.

Unsatisfied with this first wordplay foray, Mirrodin contained the card Anodet Lurker. The card’s name is an anagram for “Darker Onulet.” Finally, Rise of the Eldrazi heralded the arrival of the Mega Onulet itself, Enatu Golem, so named because it gained a whopping four life when it died.

These teasers from Maro are always great fun and certainly whet my appetite for the next set. Remember to catch the debut video for The Brothers’ War on October 27 on Magic‘s YouTube or Twitch accounts and stay tuned for more news on the set and more.