Vivien on the Hunt Ramp is one of my favorite archetypes and boy this is a sick payoff! A 7 mana 7/7 Trample, Reach is a pretty solid stat line, but when it comes in you get not one, but TWO ETB abilities. You could get a Naturalize, 5 life, a 4/4, or a Shield counter which is plenty to choose from!

Unlike other expensive creatures in this set, while this still gets tagged by cheap exile removal, you can easily get a lot of value regardless which makes this relatively exciting. Personally I still like Koma, Cosmos Serpent more, but this seems like the perfect accessory to it! While this seems unbelievable in Commander, spending 6 mana on an effect that isn’t winning the game in Constructed does not seem particularly effective. Unless there’s some insane combo I’m missing, I don’t see much utility here. Maybe Goldspan Dragon can make something of this, but I doubt it. Do my eyes deceive me? Is Thragtusk back in Standard? Well, no, but this card is very good! A 5 mana 5/3 that gains life when it comes in is an obvious call back to ol’ Thrag, but it gains 3 instead of 5 life and only gets the token on death rather than leaving the battlefield, but it is a 4/4 for what it’s worth!

Yet again, this card is going to be susceptible to exile based removal, but if you play around The Wandering Emperor, you really only have Vanishing Verse to worry about. Even if this does get Versed, you still got 3 life out of the exchange and if you’re facing a deck that can’t exile this, Warchief is going to be pretty gross. Right after Workshop Warchief we have another spiritual successor! While I’ve seen a lot of comparison to Wayward Swordtooth, I actually don’t think it’s that similar. Yes the designs are similar, but I feel this will play out a lot differently. While Swordtooth required you to have lands to do literally anything, Stomper gives you the land up front. Furthermore, while the body is a bit smaller, having Vigilance is huge and great against The Wandering Emperor.

I may be too high on this card, but if your deck requires a lot of lands, this seems like a great addition. 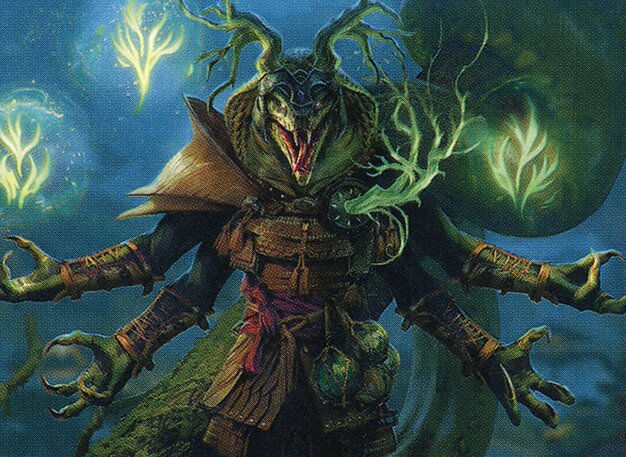 Now this is an interesting card as it looks so good, but I feel it’s a bit of a trap. Don’t get me wrong, I think Gala Greeters is decent, but will play out much worse than it reads. This seems like a slightly worse Luminarch Aspirant, but needing to play a lot of creatures for this to be at all relevant is not ideal. That said, there is a low bar for how much a 2 drop has to do to be playable, but still. That said, all 3 abilities are quite good so if there’s some sort of tokens deck that is viable, this card would likely be excellent in that shell. So this is a build around that’s not even good when you build around it? Unless there’s some silly combo with this, this is one of the worst Rares I’ve seen in modern Magic. If you got the second creature for free, then this could’ve been a cool and fair build around, but this is as disappointing as it is atrocious.

*Assuming there’s no combo deck that can use this however doubtful that is. A 3 mana Rabid Bite isn’t great, but one that is 1 mana against Black decks is a bit more interesting. It is scary that this can be blown out most often by the color it’s supposed to be hosing which definitely lowers its value for me. Honestly, if you want this effect you would probably rather play Master's Rebuke, but the exile clause could be relatively helpful. This is so close to a Standard playable rate! Conclave Naturalist is a fine sideboard card and while this has a larger body and is more versatile, 6 mana is a lot to spend. For what it’s worth, there may be a world where this card is actually usable, but I have my doubts. A 2 mana 3/1 with mini Lure and Blitz? Honestly not bad! This probably doesn’t have the strength to make it in Standard, but I wouldn’t be terribly surprised either! This has some reasonable utility and can really mess with combat, but considering this isn’t a complete Lure, I doubt it’ll be that strong. This is so far from Primal Might, but getting it Instant speed and getting a 1/1 to boot is somewhat interesting. I doubt this would see play as I don’t know where you’d want it, but I wouldn’t completely count it out. While this will mostly be a worse Magda, Brazen Outlaw or Kessig Naturalist, being able to untap creatures as well or enchanted lands does give it some utility the others lack. I highly doubt this could see play, but I think it’s at least worth keeping an eye on. 2 mana Fight spells generally aren’t great, but like Deadly Dispute, adding a Treasure to it can make this better. Probably still not great, but definitely worth considering.

While Green doesn’t have an excess of great options, I definitely am pretty attached to some of the cards previewed. While Red is still the best mono color in my eyes, Green has some goodies!