Strixhaven: School of Mages was a major hit for Magic: The Gathering. Apart from it being the game’s take on the popular fantasy trope of “wizarding schools”, it also offered something “new” that excited and delighted. Strixhaven had the Mystical Archive, a “bonus sheet” in the vein of the Timeshifted cards from Time Spiral and later Time Spiral Remastered.

For Strixhaven, a set centered on the Magecraft mechanic, the Mystical Archive was comprised entirely of instants and sorceries, making for a fresh addition to the draft format. Now, with The Brothers’ War only two and a half months away after Dominaria United, whispers have begun to emerge that it will feature it’s own bonus sheet. The Brothers’ War, essentially a retelling of the story from the set Antiquities (albeit possibly with a time traveling Teferi in the mix), will almost assuredly have a very heavy artifact theme. In fact, Mark Rosewater has spelled it out almost overtly for us in his articles about Dominaria United.

Thus, when retail pre-order listings for the set included a unique card slot with rarity starting at Uncommon and going higher, the immediate assumption by many (and a leak source claiming that this was in fact happening) was that this would be an “Artificer’s Archive“, a slot with reprints of iconic and powerful artifacts in a unique frame to go along with the theme. These cards would be playable in Limited, but would not be legal in Standard and Pioneer (but likely WOULD be legal in Historic), of course.

Strixhaven’s Mystical Archive leveraged the Uncommon slot for Standard-legal reprints, but there just aren’t enough worthwhile artifacts legal in Standard currently for that to hold true for The Brothers’ War, so we have to presume all of them will likely be pulled from older formats.

For the sake of this article, and for speculation in general, I’ve decided to use that presumption to essentially look through Magic’s past to find some artifacts I think make a lot of sense here. The cards need to have a real purpose in the draft environment (sorry Jeweled Lotus), and also have either some amount of nostalgia or value. As such, here’s my top 10 picks for the Artificer’s Archive, along with what rarity I believe they’ll have on the bonus sheet! I’m leading with what many would consider an odd choice, but one that makes a lot of sense for the setting. Dragon Engine isn’t a valuable card, and it’s role in the Limited environment would likely amount to pack filler. That said, the card represents one of Mishra’s primary war machines during the conflict with his brother, Urza. Dragon Engine‘s status as pack filler does have one benefit, of course, which is that it’ll go later in drafts and always function to help out with a weaker curve in your draft deck. 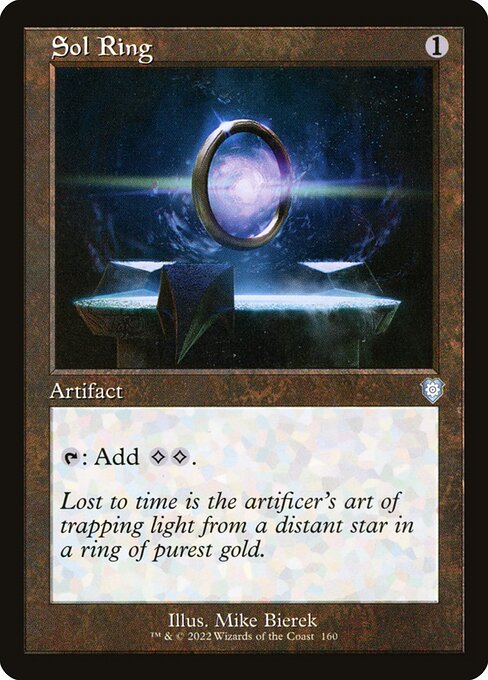 Artifacts don’t get more iconic than Sol Ring. It is THE Commander staple, and is literally reprinted over and over again each time a Commander product is released. It’s also a card that dates back to the very first set of Magic. Still, because of it’s absurd power level, it can be very warping for a Limited environment, especially one that is artifact-centric.

I believe it still shows up here, albeit at Rare, to decrease the likelihood of it appearing in too many drafts, while still saving the Mythic slots for much more valuable inclusions. This reprint also has the added bonus of adding the card to Arena, and while I assume it will be banned immediately in Historic, it likely will be legal in Historic Brawl, bringing that experience closer to the Commander experience. A relic of a bygone era, Steel Golem was once a powerhouse of Constructed. Now, it likely wouldn’t see very much play in any formats beyond Limited, where it would also be unlikely to make any big waves. Still, there’s something powerful to be said about the effect nostalgia can have on the player base. Being able to play with a beloved card once more, decades after it has fallen out of favor, is sure to get some older players to check out the new set, which is likely part of the goal with doing a set based on The Brothers’ War. Once the scourge of Modern, Arcbound Ravager‘s luster has faded a lot over the years. In a Limited environment with a heavy artifact focus, though, it can still exist as a true monster and threat. Adding it to Historic has the added bonus of providing yet another classic card to the Artifact decks there, also bolstering the format’s “Historic” nomenclature. If you told me it gets bumped up to Mythic, I’d believe it, but again, I think those slots will be saved for much higher value and more desirable cards… … Like Aether Vial. Vial is a super popular card that has seen play in both Legacy and Modern over the years. While it was just reprinted in Double Masters 2022, it’s still not on the Arena client, and there’s likely some consideration for that fact in the decision making. Historic is a format where the card can still shine in modernity, and it’s still commanding a decent price in paper for variants. It’s the perfect sort of card to showcase what I think most of the Mythics on a bonus sheet will amount to: All-Stars that have seen play across multiple formats, and arguably still have a lot of relevance in those formats. There’s almost assuredly going to be a board wipe on the bonus sheet, and Disk is just too much of a classic, iconic card to not show up here. With Karn's Sylex in Dominaria United, another possibility could be Oblivion Stone.

Still, Disk is a popular Commander card in some circles, and potentially a card that can show up in future iterations of the Arena Cubes. The big strike it has against it is value, so I almost want to suggest it’ll be a Rare, but Day of Judgment in the first Archive being a Mythic has me believe this mirrors the rarity. If you told me it swaps rarities with Ravager, though, I’d agree that that makes a lot of sense. Another classic card from the past, this one commands a decent price, and likely could end up being banned in both Historic and Historic Brawl, much like a few inclusions in the first Archive. It’s role would primarily be a relatively high power, high skill card for Limited, and a future inclusion in many Cubes. Winter Orb is a classic staple in Cube for white aggressive decks looking to leverage tax effects to defeat their opponents, and that role for it can exist on Arena, as well. I’ve lumped these two together because they’re essentially a pair, and while the latter has been reprinted quite a few times, the former hasn’t seen a reprint since the 1990s, and still hasn’t received it’s first foil printing. Thematically, it makes sense to see both here, in a retelling of the war between Urza and Mishra, and both are decently valuable now. They both look relatively inconspicuous, but rest assured that with Tarmogoyf in Historic, it’s likely both are at least considered for Midrange decks looking to buff their beaters. Arguably the most iconic of the Sword cycle, SoFaI is a popular Cube staple and a card that has previously been leveraged in the sideboard of white-based Legacy DnT decks. There’s honestly not much more to say beyond that about this specific card, but the Sword cycle itself is extremely popular, so I think one of them has to be here. Sword of fire and Ice just makes the most sense to me, but any of the original enemy cycle could potentially show up as an Artificer’s Archive card. I’ve saved the best and most fun card for last. Mindslaver is a sick card that wowed a lot of players when it was first previewed during Mirrodin spoiler season. The idea of controlling the opponent’s entire turn was wild! It was popular enough that it ended up showing up again in Scars of Mirrodin years later. It saw some amount of play in Modern in Blue Tron decks, and it ended up in several Cubes on MTGO over the years. Will it be as popular in Historic or Historic Brawl as it has been elsewhere in the past? Unsure, but you can rest assured that players will have a great time leveraging it in Limited this Fall if it ends up showing up here.

Anyway, those are my ten (technically eleven) picks, but there are many others I think are possible: Cranial Plating, Blightsteel Colossus, Disrupting Scepter, and many others. There are dozens of classic artifacts that make a lot of sense in this context to appeal to Commander, Cube, Limited, and many other players. I think it’s almost assured that The Brothers’ War does have an Artificer’s Archive, and I imagine we’re not too far off from learning more about it. The Brothers’ War releases in mid-November, so stay tuned to MTG Arena Zone for more news and previews from the set whenever they show up.